Marc Cassel brings his eclectic approach (and pork belly ramen) to the classic New England seafood shack.
By Nancy Nichols | May 23, 2013|12:00 am

Subscribe
Advertisement
The most important message I took away from my first two visits to 20 Feet Seafood Joint was clear: get there early. On previous visits, I’d arrived around 7 pm and found myself standing in a long line. Even though the line to the counter where you place your order moves fast, there is no guarantee that a seat will be waiting for you after you pay. It is most certainly a joint, a self-service, BYOB restaurant with no frills. There are only 50 seats inside and another 24 on the front porch. 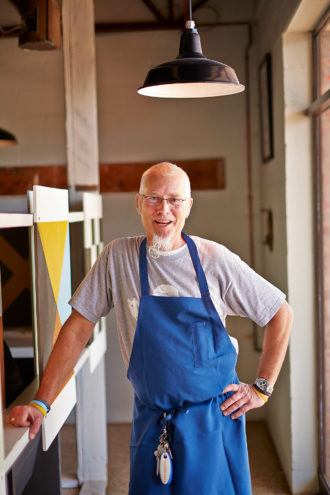 My eating team and I arrived for my last visit at 6:15 pm on a Friday night. The wait to order was short, but all of the seats in the dining room were taken. Co-owner and chef Marc Cassel was hustling through the area, delivering plates and baskets of food. On one run, he attempted to slip between two chairs just as one of the patrons pushed back. Cassel lurched forward and stutter-stepped to regain his balance. As if on cue, the music changed from Tom Petty’s “Free Fallin’ ” to Bob Dylan’s “Like a Rolling Stone.” I watched Cassel apologize to his guests as Dylan wailed: “Once upon a time you dressed so fine.” I could not have choreographed the moment better.

If you have been in Dallas for a while, you have experienced Cassel’s cooking at Baby Routh, The Mansion, Star Canyon, and Dragonfly. His glory days occurred during his nine-year run (1996 to 2005) at the legendary original Green Room. In that tiny kitchen in Deep Ellum, Cassel was the mad scientist behind “collision cuisine.” He wowed rock stars (Eric Clapton!) with his signature mussels steamed in Champagne and ginger. The kitchen served a red bell pepper soup, created by original chef Chris Pyun, with “room” scrawled across the top in jalapeño coulis. It was pre-“foodie” fine dining.

There are a few similarities between Green Room and 20 Feet: the exterior is grubby, and the kitchen is teeny. Cassel features his signature mussels. And, on one occasion, he offered the same red bell pepper soup as a special. This time, he wrote “20” on top instead, of course.

So far, the top sellers at 20 Feet are the lobster rolls and fish and chips. Running a close third is the pork belly ramen. Yes, you read that correctly. This is not a die-hard-Red-Sox-fan-style seafood joint. Cassel has added some brilliant options to those who want something other than fish. Besides the ramen, he is making a delectable falafel that is suitable for vegetarians.

The lobster roll would make a die-hard Red Sox fan bawl. The live lobster is boiled in water and seaweed. Cassel mimics the salinity of the sea by adding a ton of salt to the water. After the pink meat cools, he tosses large chunks of it with a virtually undetectable combination of mayonnaise, lemon zest, lemon juice, and salt and pepper. His wife (and co-owner and chef) Suzan Fries makes the bun using challah-like dough, which is rolled out and shaped like a hot dog bun. Once baked, the bun is top split, griddled in butter, and stuffed with the meat from the one-and-a-quarter-pound lobster. 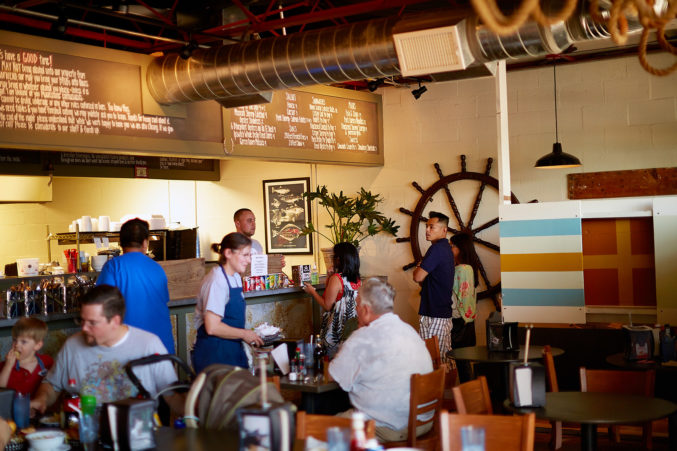 The cold lobster meat against the warm, buttery bun makes as good a lobster roll as any I’ve eaten. Some people flinch when they see the price, but Cassel’s cost for the sandwich exceeds the $18 tag. “I buy from American fisheries that are highly regulated,” Cassel says. “There is nothing on my menu from a factory boat. I use one-and-a-quarter-pound lobster for each sandwich.” And then there is the homemade bun.

The cod for the fish and chips is line-caught. The same cod is delivered to pricier restaurants in Dallas and fetches more than Cassel’s $14 presentation. He fillets and portions the fish, then uses a light tempura batter. He has obviously been tinkering with the recipe. The first time I ordered the fish and chips, the batter was thick and globby. I pulled it off and rolled it into little dough balls. A month later, I was served a splendid rendition. The cod was hot and juicy; the batter crunchy and thin. The accompanying garlic-salted fries were the envy of my fellow diners.

In addition to the Green Room mussels, other must-trys on the starter menu include oyster shooters, New England-style clam chowder, and fried whole-belly Ipswich clams. The shooters are $2, but hang with me: each shot glass is filled with a cold water-harvested bluepoint oyster, diced pineapple, a dash of Sriracha sauce, a little ponzu, and topped with wasabi tobiko. Please do not ask for crackers. This tasty two-bite shot deserves respect.

Cassel has many customers who question the authenticity of his chowder. The banter is mostly good-natured conversation, but they all have their own ideas about what makes a good chowder, and some folks stand firmly by their brand. “Some think it should be watery; others want their spoon to stand up in it,” Cassel says. He plays it safe by “going right down the middle.” I found it delightfully thick and full of hulking whole clams, with a backbeat of bacon.

I have added Cassel’s fried whole-belly Ipswich clams to my last supper wish list. His version does not mimic most found in New England, where the plump, briny clams are dipped in evaporated milk and coated with cornmeal and flour. Instead, Cassel gives them a gentle roll in flour and a light egg wash before he coats them with panko. The breading is so light that you can still see the clam belly. The crunchy panko is just the right counterpoint to the soft clam. The clams are served with Cassel’s “secret ingredient” tartar sauce. When I begged him for the secret, he laughed devilishly and said, “Love.”

If you are not in the mood for seafood, Cassel offers a top-notch ramen, the Japanese noodle dish emerging as a top trend in Dallas. The broth takes two days to make. The process starts with a pork stock made from boiling knuckle bones for eight or nine hours. Once the broth has turned a dark, gelatinous brown, it is strained. The next day, he throws in roasted chicken, kombu (kelp), mirin (rice wine), soy sauce, and leeks, and lets it simmer for at least six hours. Once a ramen order hits the kitchen, the broth is mixed half and half with dashi (fish and kelp stock) and poured over fresh wheat flour noodles, pork belly pieces, spinach, and leeks, and seasoned with a few other goodies such as sesame seeds and seaweed. As the bowl leaves the kitchen, the soup is topped with a soft egg that has been marinated in mirin and soy. “I’ve had a lot of Japanese customers come in to try it,” Cassel says. “It’s the only Japanese dish you can mess with and they don’t mind. Everything else has strict preparation rules.”

There is a lot to love about 20 Feet, but the place is not for everyone. If you live in the East Dallas neighborhood and can walk, it’s terrific. Parking, especially on weekends, can be difficult. The restaurant is located in a small strip center on Peavy Road that also includes Good 2 Go Taco and Goodfriend Beer Garden and Burger House, both of which attract hordes of their own.

Cassel and Fries leased the space, a former beauty salon, more than a year before they opened. It took them that long to find financing, and once they secured an investor, they were left with a shell of a building and no money from the landlord for finish-out. Unlike restaurants in other parts of town, they had to pay for the big-ticket items such as a grease trap, new plumbing, hoods, and various other kitchen equipment that Cassel bought at an auction for used restaurant supplies. Do not expect to be knocked out by the decor or the seating. If you did not know better, you would swear the place had been there for 40 years.

It is almost impossible to space out a meal. If you go through the line and order appetizers, you will have to get up and go back through the line to order and pay for entrées. I tried this method twice, and it was disastrous. But the restaurant is not designed to work like that. It is a short-order setup delivering high-quality food. You wait in line, place your full order, and take it as it is done. A sign on the wall urges customers not to linger. If you are seated on one of the unpadded wooden banquets along the wall, you will be happy to comply.

Expect sincere and friendly service at this Richardson restaurant.
By Nancy Nichols
Chefs