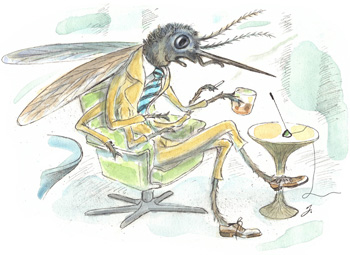 Mosquito: Man, I don’t think “crazy” even covers it. I’d just gotten back from Cabo, and then, you know, the mayor basically declared war on us. It was terrifying. I mean, cities spraying Duet on us is like a ghost story parents tell their kids to keep them in line. Most of us thought it was a myth. Or something only our grandparents had to deal with, like powdered blood and rotary phones. Speaking of which, I was on the phone with my mother for, like, four hours that first night they sprayed.

D Magazine: Yeah, I bet. Is she here?Mosquito: Oh, no. She’s in Wisconsin. That’s where I grew up.

D Magazine: Really? I mean, I don’t hear an accent.Mosquito: Thanks, took me a long time to drop it. Now I wish I still had it, you know?

D Magazine: Oh, for sure. When you don’t have an accent, it’s like you’re from nowhere.Mosquito: Exactly. Exactly.

D Magazine: Okay, so walk me through the night when they sprayed your neighborhood.Mosquito: Well, I met some friends after work for a drink. There’s a great backyard pool over off Greenville, and the kid who lives there has a lot of friends, and the parents are real natural types. The bug spray they use might as well be water vapor. It tastes gross, but I don’t think it could kill a gnat. We were there for a couple of hours, and then we went to my friend Mark’s. He lives over near Oak Lawn. He was having an aerial spraying party—you know, like an end of the world party? It got pretty crazy. I would imagine there were a few people the next morning who were probably not thrilled the world didn’t end that night. [laughs]

D Magazine: Uh, no.Mosquito: Stuff will mess you up. But so, like I said, I was basically on the phone with my mother the whole night, so I didn’t have much fun. And then I went home. I guess I got lucky. I was worried, obviously. But besides the hangover the next morning, I felt fine.

D Magazine: I know that mosquitoes normally spend six to eight months in a state of torpor, so—Mosquito: Oh, yeah—normally.

D Magazine: You didn’t do that this year?Mosquito: Yeah, no, after last summer I was, like, “YOLO!” You know? [laughs] I mean, yeah, hibernation sounded pretty sweet after all that craziness. But then my friend Terry was all, “Let’s go to Ibiza!” So a few of us went. Ever been?

D Magazine: No. I hear it’s pretty insane.Mosquito: You have no idea. It makes the St. Patrick’s Day parade look like a kid’s jump house party. I definitely partied my cerci off. Almost literally. [laughs] The scene over there—man. I almost didn’t come back.
D Magazine: This summer is expected to be another tough one. Did you do anything to prepare?Mosquito: You know, I started to. Marty and a couple of the other guys set up a little two-a-day camp over near White Rock, just to get everyone’s wings back in shape. Get the antennae pointed in the right direction. But I strained my antepronotum on, like, day three, so I gave up on that. I made it through last year, and I was melting my occiput pretty much every night. So, whatever. I’ll be fine.

D Magazine: Did this change your opinion of living in Dallas? You’re here, but are you going to stay?Mosquito: [long pause] I … think so. I mean, I don’t know. On the one hand, this is home. All my friends are here. Work. Everything. On the other, yeah, it’s difficult living in a place where people openly despise you. It was bad before, but now this West Nile thing—forget about it. You show up in a backyard—a backyard you’ve been going to forever, mind you—and the faces on the people there? It’s like the Angel of Death just showed up and wants to sell you Amway products. So I don’t know. I’m back this year, and I’ll probably stay, but we’ll see what happens.

D Magazine: Okay, one last question: do you have West Nile?Mosquito: Man, screw you. I mean, I, we—. [long sigh] I thought—screw you. How dare you? How dare you? This interview is over. We’re done. Don’t hang around any standing water this year, asshole.