BOOM. It’s a word that has been heard around Dallas before. Like back in the 1930s when the city was awash in money pouring in from the oil boom in East Texas. Or, like in 2011, when people kept shouting it out from the stands at the American Airlines Center each time Dirk Nowitzki hit a one-legged jumper en route to an NBA title. But the word “boom” is rarely heard when referring to this area’s residential real estate. “Steady” is more like it.

Consider this: during the biggest residential housing boom in U.S. history, a period more or less between 2000 and 2006, when places like Los Angeles were seeing triple-digit gains in home prices, Dallas’ home prices rose about 24 percent overall. Two-four. That’s it.
Now, to be sure, 24 percent is just fine in six years. And, yes,  that “steady” appreciation spared Dallas the fallout from the housing bust that sent prices cascading in those hot markets of Southern California and South Florida and lots of other places. And that cascade tanked the U.S. economy. But, still, Dallas had no bust because it had no boom, and that means that housing prices here, up until last year, had barely appreciated at all, on average, in the past decade.

But that was then. This is now. And right now, you can go ahead and say it: boom. In the first quarter of this year, many North Texas neighborhoods saw double-digit price gains. At the same time, fewer houses were on the market than at any time in the past three decades. The area has a single-family home inventory level of just 2.8 months, meaning that if no more houses go on the market for 2.8 months, every available house would, in theory, be sold. Two decades ago, the inventory level in Dallas was 10.3 months. Ten years ago, in the middle of the national housing boom, it was 6.7 months.

What does it all mean? Simple: there are fewer houses to buy right now than there ordinarily would be. A lot fewer. At least part of the reason for that is that new home construction has yet to recover from the economic downturn. In the first quarter, crews got to hammering on 4,312 houses in the Dallas area, the most new home construction in that quarter in five years. At that pace, we’ll have something like 20,000 new houses built here this year. That’s less than half the number of houses that went under construction in 2006.

Builders have slowed down for good reason. In the past few years, plenty of people didn’t want to buy houses—new or otherwise. But talk to real estate agents, like we’ve been doing here at D Magazine, and you find that is no longer the case. People—a lot of them—are looking for houses again. And because there are a lot of potential buyers but not a lot of sellers of either new or existing houses, prices have shot up.

There’s a word for that, too. Two words, actually. “Seller’s market.”

“This is definitely a seller’s market,” says Jeff Duffey, of Jeff Duffey & Associates, in Dallas. “In the best neighborhoods, if a seller isn’t getting multiple offers in their first four or five days on the market, they are either obscenely overpriced, or their house wasn’t in condition to show well. In this market, there’s no reason right now your home shouldn’t sell within a week.”

That’s great news for sellers, particularly people in Coppell, the Park Cities, Plano, Preston Hollow, Lakewood, and some other spots around town that are featured on the pages to follow—spots where sales have been particularly robust so far this year. For the first time that most real estate agents here can remember, bidding wars have become commonplace. And agents are resorting to any means necessary to get their buyers into the houses they want. “I’m writing cover letters with my offers, telling the stories of my buyers, hoping to appeal to the sellers’ emotions,” says Wendy Hulkowich, lead agent at the Hulkowich Group, in Plano. “I just wrote one that said, ‘Look at this family. They are first-time homebuyers with a newborn, and they want your house.’ We included a picture of them in the hospital with the new baby. We’ve never had to do things like this in Dallas before. This market is unique.”

This market also comes with a catch for sellers. They may be able to command a premium for their properties, and they may have a scrapbook full of letters from potential buyers, but, at some point, most of those sellers will be buyers, too. And that’s scaring off a lot of would-be sellers. “You’re seeing it all over, especially in the Park Cities,” says Sue Krider, a vice president with Allie Beth Allman and Associates, in Dallas. “We’re getting to a point where people would put their homes on the market if they had a place to buy. But they don’t.”

And you know what that means? Supply will stay low while demand remains high. Boom! 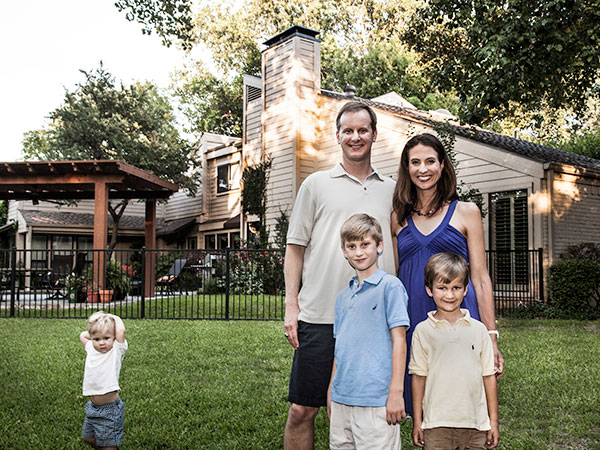 The Sellers: Tracy and Mike Voegtle

The Objective: Find something to buy in the Richardson Independent School District, and find it soon.

The Would-be Buyers’ Story: The last time Tracy and Mike Voegtle were in the Dallas real estate market, things were pretty easy. They bought a house in Lake Highlands in 1999, and after years of steady but small appreciation, sold it in 2006 when they relocated to Atlanta. There, they bought a house near the peak of the nationwide boom. “In 2006, we paid more for our house in Atlanta—in a 300-home neighborhood—than anybody paid for a home in that same neighborhood all year,” Mike Voegtle says. But when Mike’s architecture firm merged with Dallas’ 5G Studio Collaborative last year, Mike and Tracy and their three young boys packed up again for Dallas—and a suddenly different housing market. “We could not find a buyer in Atlanta for the longest time, so we ended up taking a bath on our house there,” Mike says. “But we had to move on. And when we came to Dallas, we found the exact opposite market. Here, the day homes go on the market, they already have multiple offers on them. We don’t even get the chance to look at most of the ones we’re interested in.” Of the houses the couple has seen since February in an area roughly bounded by Preston to the west, Coit to the east, Frankford to the north, and Alpha to the south, they’ve placed offers on five. Each time they’ve lost out on the house. Each time for a different reason. “The market is extremely frustrating for a family,” Mike says. They are renting a townhouse that’s located in DISD. “We feel like time is running out. We want to be in the Richardson school district before the year starts.” 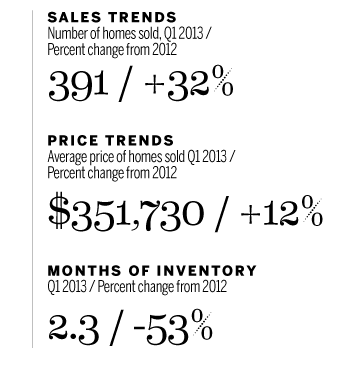 The Market: There were 391 houses sold in the Far North Dallas/Addison area in the first four months of 2013. That’s 32 percent more than were sold in the same period last year. It’s 90 percent more homes than were sold there in the same period in 2008. But it’s still just 100 homes sold per month. Cut that number down further for buyers like the Voegtles, who also are only looking for a modern-style or midcentury modern home, and further still for buyers who want a specific number of bedrooms, and further again for buyers who want to be in a specific part of “Far North Dallas/Addison,” which is, unquestionably, a broadly defined area. Once you make those subtractions, buyers like the Voegtles in any given month might be looking at a dozen, or fewer, total available homes on the market that meet their needs. But here’s where the math gets even harder: Far North Dallas/Addison had 38 percent fewer active listings in the first quarter of this year than it did last year. Cut the already tight supply by a third, then throw a whole lot of new buyers into the market—as real estate agents are seeing all over Dallas—and you get many people looking at not many houses.

The Possible Solution: Mike admits he may have to change what he’s looking for to find a home in the area in which he’s looking. And he has talked to more than a few people who have “just given up and moved to Frisco.” But for the moment he’s sticking with his gameplan of watching the market doggedly on a daily, even hourly, basis and having his wife, Tracy, act as a private investigator of sorts. “She’s trying to infiltrate these neighborhoods from a social standpoint—joining groups, talking to friends, and trying to gain insight on what’s coming on the market. We’re trying to stay optimistic. But every house we lose, it becomes harder.” 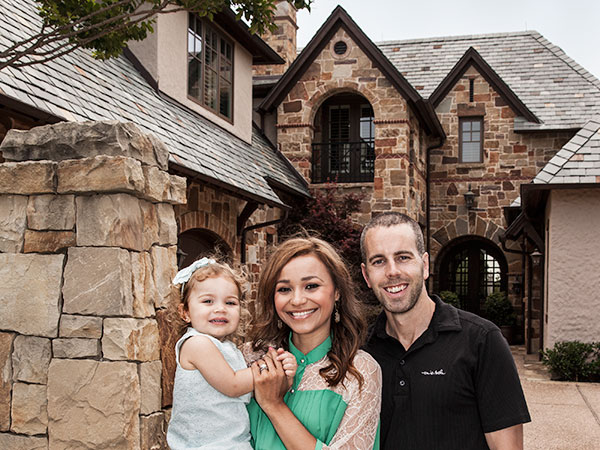 The Sellers: Carol and Chase Murray

The Objective: Capitalize on the rebounding market by selling a three-bedroom house in Westlake and buying a larger one in University Park, so this couple and their 2-year-old daughter can be closer to central Dallas life.

The Sellers’ Story: In 2005, when he was a single avid golfer, Chase Murray bought his first home, a new build on the grounds of the Vaquero Country Club development in Westlake. That year also happened to be a highpoint in the housing market. Eight years later, as the market has again picked up, Murray is ready to sell and buy again. But this time, greens and fairways aren’t the attraction. Concrete and steel are. Murray is now married and has a 2-year-old daughter. He’s 31. His wife, Carol, is 26. “There aren’t a lot of people our age in Westlake,” Murray says. “So we’ve decided we’d like to be closer to the city, and we think University Park is the right place to be.” 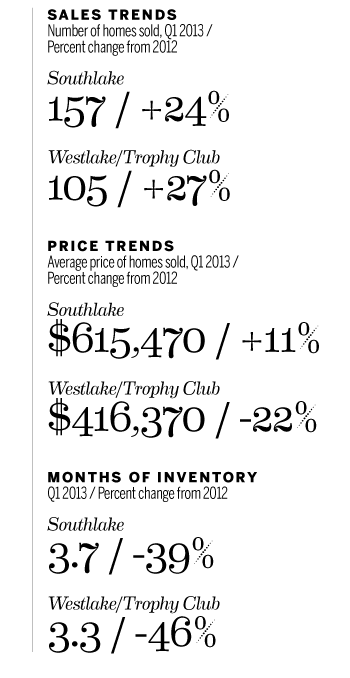 The Market: Cindie Stewart, a real estate agent who specializes in Southlake, Westlake, and Trophy Club, says after several soft sales years, those communities northwest of Dallas are in demand again, both with buyers and with builders. “The builders are turning a lot of dirt here—especially in Trophy Club,” she says. “There are a lot of new, high-end homes coming on the market, especially in the Knoll in Trophy Club and in the Hogan’s Glen development there.”

The Catch: In many of Dallas’ wealthier communities, prices have gone up as home sales have increased this year. Not so in Westlake, where average sales prices are off 22 percent from the first quarter of 2012. The reason, area real estate agents believe, is that very few homeowners whose properties are worth $600,000 or more chose to list their properties for sale during the rebound. That drove average prices lower over the short term, but may not be a long-term trend, they say. And those agents may have a point. Since 2008, the median home price in Westlake is up 37 percent. That’s better than median price gains in Southlake, Coppell, and even the Park Cities.

The Bottom Line: The Murrays have yet to get the price they’re looking for. “We’ve had some offers,” Chase says. “But we’re not in a rush to do anything. This community is in demand. So we can wait for the right offer.” And even when that offer comes, Chase won’t be leaving Westlake entirely. “I’m keeping my membership to the club,” he says. “The golfing is great here.”