Real estate agents are overwhelmed by the current demand for single-family housing in Dallas. But, so far, they’re only cautiously optimistic about the demand for condominium properties. That’s probably wise. Just as the construction of several tall condo towers was slowly transforming the downtown and Uptown Dallas skylines, the housing market collapsed, and the national economy fell with it. That put a complete stop to marquee projects like the Residences at the Stoneleigh, and it forced the conversion of other eye-catching spires, like The House—a 28-story, 133-unit building in Victory Park—into mostly rental properties. 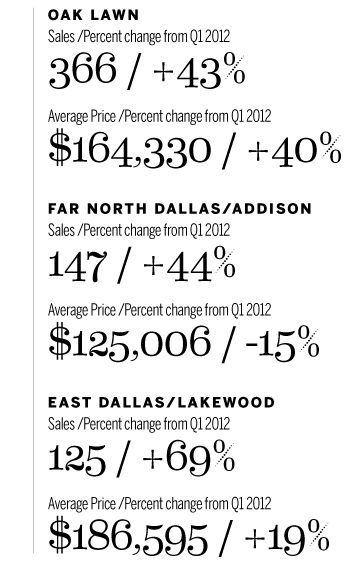 But the market is starting to turn back toward buying. The 22-story Stoneleigh residential tower, which sat unfinished for years after going into bankruptcy in 2009, got a new owner last year (Centurion American Development Group, which bought the tower for $4.5 million) and has resumed construction. And several buyers have already paid about $1 million each for condo space that they’ll have to pay to finish themselves. At the nearby 31-story Azure condo building, which was finished in 2007, the developers are just a few units from being sold out. Gabriel Barbier-Mueller, CEO of developer Harwood International, says that since last year the units have again been selling at their price levels from 2007. Just a few blocks away, at The Residences at the Ritz-Carlton, one real estate agent says prices, which reach as high as $3.75 million, have recovered to their 2008 levels.

Still, most of the Dallas condo market is in smaller, older buildings that dot the blocks of Oak Lawn, Turtle Creek, and the streets just outside of downtown. And those units—which can often be purchased with monthly mortgage payments that are comparable to monthly rental prices in the area—are selling even faster than the luxury properties.

Loren and Alea Garces bought their two-bedroom, two-bath, 1,100-square-foot Oak Lawn condo in 2008, when the market for condos was in a slide. They put it up for sale this May when the market had begun to recover. But neither knew if the condo would sell for their asking price of $155,000—$30,000 more than they’d paid for the space three years before.

“The same day we listed it, we had multiple people coming to see it,” Loren says. “There were about 20 people in to view it over the first weekend, and we had two offers, both at our asking price, within two days of listing. We were pretty pleasantly surprised.”

The Residences at the Ritz Carlton Courtesy of Ritz Carlton
Alan Shaffer, the agent at Clay Stapp & Co. who represented the Garceses in their sale, wasn’t as surprised. “The market has been turning up, and condos in older complexes seem to be selling better,” Shaffer says. “Really, the pre-owned market has gone through the roof. It went from a buyers’ market to a sellers’ market in about three weeks at the start of 2013. There is demand everywhere right now for condos in Uptown and downtown, even at the high end with new construction. The Stoneleigh is a great example. People are buying lots in the sky there for $1 million now. That kind of thing hasn’t happened in Dallas in a long while.”

So is now the time to buy? Well, that depends. The market has recovered, sure. “But,” cautions Sue Krider, a vice president with Allie Beth Allman & Associates who specializes in high-rise condo leases and sales in Dallas, “we’re not popping the Champagne corks just yet. Generally, condos are the first to come down and the last to come back. A lot of people who were leasing because they couldn’t make up their minds about buying in this market are jumping into buying now.”

What they’re finding are condos and townhouses in Oak Lawn, where the bulk of the city’s condos are sold, carrying a median price tag of $251,120. That’s 17 percent higher than the median price in the first quarter of 2012. And the price hikes are something to watch cautiously, real estate agents say.

“What we don’t want to happen is things go crazy with upward prices and then we have a quick downturn,” Krider says. “But several of my long-term leasing clients have now decided to buy. They feel like they’re able to buy things at a good, fair price.”