This was how I felt about most of the men I dated, many of them divorced and hovering around 40. Their egos were raw and hungry. They needed drunk sex and cooing sounds. I sometimes wanted to cut them off in midsentence, hold their hand between both of mine, stroke the 5 o’clock shadow on their cheek, and say: “You need to go bang 25-year-olds for a while. It’s okay. My feelings aren’t hurt.”

I felt that way about D., a little bit. He was in a “work transition.” He and his wife had split a few months before. And as we sat at the Grapevine, he told me how they’d been in an open relationship for the last five years of their marriage. I sipped my water with lime and nodded.

“An open marriage takes incredible trust,” he said. And I believe it. But it was tough, too, and ensnarled his self-esteem in unexpected ways. He was sore, for instance, about the way his wife had gone on that dating site a few years ago and been smothered with attention from men who didn’t care that she was hitched. But he, in turn, had gone on the site and been rebuffed by women who cared very much that he was hitched.

And I agreed that it was unfair, the same way that it was unfair how men my own age would prefer to bang 25-year-olds than tangle with a grown-ass woman, but these were the laws of the universe, and we were subject to their spin.

That week, I had a business-type lunch with a friend who has written about this city for many years. I mentioned my conversation with D. to him, and he was incredulous. “Open relationships? In Dallas?” And when I said yes, totally, in Dallas, he said, “But the open relationships are all initiated by the man, right? They’re just smokescreens for the guy cheating, right?” And I said no, not at all. Because in D.’s case, it was his wife’s idea. She wanted to explore her feelings for a male co-worker. And I have one female friend in Dallas who continues to kick around the idea with her boyfriend, and another married friend who eagerly tried it on for size. She called me a few years ago. “I can’t wait to introduce you to my girlfriend!” she said, sounding tipsy, and I was so baffled, like I’d missed a very fascinating email. 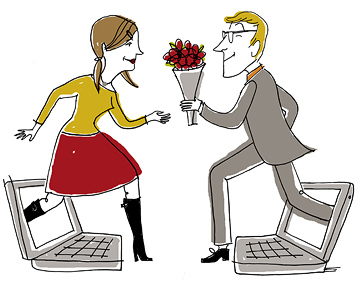 Look, it works sometimes, and it fails most of the time, but the “open relationship” gambit was not something debased or boneheaded, nor was it something that happened only in splashy New York magazine trend stories. You could find it all over the dating site: “I’m married, but we’re experimenting with something new. Maybe this will fail, but it’s worth a try.” It was something that happened between two people wrestling with their own frailties and desires. Monogamy was hard, and divorce was brutal. Could anyone be blamed for hoping a marriage contract came with a line-item veto?

D. and I met for dinner at Mai’s a few weeks later. We talked about writing. We talked about internet culture. He made me laugh by saying bizarre things. “What if I got furious, and I flipped over this table right now?” he asked, gripping the corner.

“I’d be embarrassed,” I said. “And totally turned on.”

Afterward, we sat outside Paciugo and ate gelato. “Let’s sit here and make fun of people,” he said, as we situated ourselves on the high stools that overlooked Abrams and watched giant trucks pull up to the curb.

And I also felt this way about the other men I dated, who were never exactly right, but still close. Like the tattooed academic who turned out to be a jerk. Or the English teacher who scribbled poems in a notebook and was big and handsome as a superhero. But his voice grew flinty when he talked about his ex, and he was rattled from a dozen major life changes, and I couldn’t help thinking he needed to go bang some 25-year-olds. I started to think I should, too.

I am getting to that age when people say odd things about the fact that I’ve never been married. “I can’t believe someone hasn’t picked you up and carried you off to the altar,” my uncle told me recently, and I thought, “What the hell kind of relationship is that?” My uncle has been married four times, twice to the same woman.

But I think what he meant was: “You have value. I want happiness for you.” And I agree, which is why I’m not letting some strange person carry me off to an altar. I have such a good life already. I live in a carriage house on Swiss Avenue with an old cat who always listens. I strum my guitar every night. I make dinner in my underwear and dance to early Van Halen. I’m not desperate for some guy to cuddle me on the couch while we watch America’s Next Top Dancing Dog (although I am desperate for someone to make the show America’s Next Top Dancing Dog).

One night in August, I went to the Chihuly exhibit with a guy I’ll call Matt. He was not interested in open relationships. That guy was built for monogamy. I wanted so badly to like him, but attraction is a stubborn beast. It never comes when you call it.

We strolled the grounds of the Arboretum, which had been transformed into this Seussian spectacle of blown glass and wild color. It didn’t feel like Dallas. It felt like an enchanted forest. It felt like Mars.

We sat on a bench in front of a twisty yellow sculpture lit up from within, its tentacles swirling in different directions, and he listened carefully as I told him about a work situation that was minor but felt major to me. He nodded and touched my leg at certain moments, and I felt close to him. We talked about personal, real things that night. We talked about how surreal it was to be single in your 30s, to watch your close friends drift away to other universes: married life, two-story homes, Babies ‘R’ Us.

“A little inflexible?” he said.

That’s not what I intended to say, though it might be true. “I was going to say it’s made me reluctant to date anyone who isn’t incredible,” I said, and we both looked down at that moment, because neither of us was sure yet if that meant him.

I wanted to like him. I really did. I wanted him to kiss me that night, both of us illuminated by a tangle of glass that made no sense to us but moved our hearts anyway. But I knew that the following day I would send him the kind of email I was getting better at writing. “The thing is. Unfortunately. I really think.”

I have this fantasy that if I move to another city, it would be different. A city that is more artsy and progressive, more like me. I have fantasies about Los Angeles. (“Los Angeles?” my therapist practically screamed when I told her this. “Do you know how hard it is to date in Los Angeles?”) But I know this is magical thinking, that Dallas is more like me than Los Angeles anyway. That love is tricky everywhere you go.

“If you’re in Dallas,” my mother said, “it’s only logical that someone else like you is in Dallas.” Maybe my mother is right. (She is right about many things.)

Until then, we are beacons for each other, these men and I. We remind each other of what else is out there—in this life, in this city—so much bigger and full of possibility than we ever imagined.