In 2004, The Real Estate Council announced a $1 million grant to help launch the park project. The grant was later increased to more than $1.5 million in cash and incubator support, says Linda Owen, who was president of TREC at the time.

Meanwhile, Tom Leppert, the then-chairman of the Dallas Regional Chamber board who would later become the mayor of Dallas, asked fellow chamber board member Jody Grant, chairman of Texas Capital Bank, to head up a group charged with coming up with ideas to improve downtown Dallas.

Concepts included the Woodall Rodgers deck park, and Grant zeroed in on it as being a game-changer for the city. He heard about the TREC grant, and quickly set up a meeting with Zogg and Owen.

That led to the formation of the Woodall Rodgers Park Foundation, launched in 2005 by Zogg, Owen, and Grant. The small group of volunteers who make up its board has spent nearly a decade helping Klyde Warren Park come to fruition.

Says Owen, who left TREC in 2008 to become president and CEO of the foundation: “Our strongly held operating ethic was, ‘One will get a lot more done if one spends as little time as possible worrying about who gets credit’—and we were right.”

Moving the Project Forward
Along with developing plans for the park, one of the foundation’s main charges was to drum up support for the park—financial and otherwise. The reaction was mixed, board members say. For some people, the concept was so “out there” it was immediately dismissed; but, for others, it was a completely doable, bigger-than-life, perfectly Dallas kind of idea.

Foundation board member Nancy Best says it’s exactly the kind of project that she and her husband, Randy, find appealing. “We’ve always loved big ideas—and this was a big idea,” she says. “You have to remember that, for some of the early donors, there was no guarantee that the park would ever happen. It just shows what we can do when we work together.” 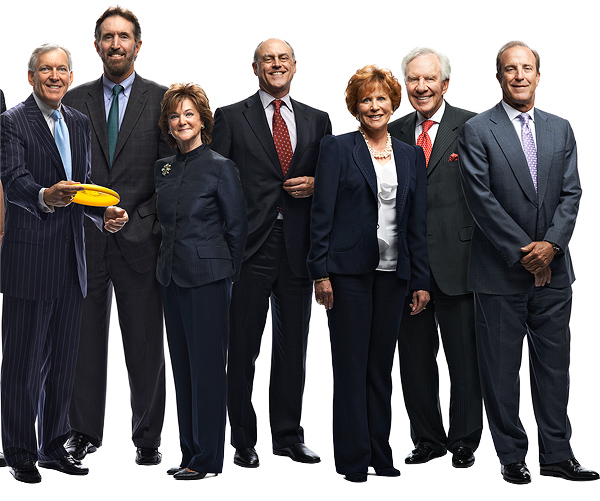 “We received public money, but private donations put us over the top,” Leppert says. “That says great things about Dallas. When you think about what’s happening now in the country, where in the U.S. do you see as much investment in the city as we have in Dallas?”

Ed Fjordbak, the former president of the Communities Foundation of Texas who’s now president and CEO of Essilor Vision Foundation, joined the park board, he says, because of his allegiance and admiration for Jody Grant. “You don’t tell him he can’t do something,” Fjordbak says, “because he will prove you wrong.”

He also was concerned about the “great divide” between Dallas’ two urban cores.

“Uptown was growing, but it was draining downtown,” he says. “Divide and conquer is what you do when want to defeat an enemy—and Uptown and downtown were divided. Plus, Woodall Rodgers was a noisy ditch—the Arts District was bounded by a noisy ditch! It made sense for us to connect Uptown and downtown. This park can become the town square.”

Fiscal Responsibility
Although he supported the project from the get-go, Fjordbak wanted to make sure that fundraising would be done in such a way that it didn’t drain donations from other worthy causes in the city.

“I knew that the AT&T Performing Arts Center was struggling to meets its goal,” he says. “Jody pledged that we wouldn’t do a public campaign so as to avoid hurting their fundraising. We wanted to be additive, not competitive, and we felt this way even before the economy turned.”

The foundation’s meetings are frequent and they are long, Fjordbak says, but that’s what it has taken to keep the park project on track.

“This is a board that speaks their mind, works on compromise, and is devoted to excellence,” he says. “We had one big basket that we filled with our wants and desires. We were never going to do anything we didn’t have the money to do. The fiscal responsibility of the board is unbelievable.”

As a native Dallasite and a taxpayer, Fjordbak says one of the things about the park that he is most impressed by is the fact that it was created “out of thin air. We didn’t take anything off of the tax rolls. Now there’s a bargain!”

Newest Members
Two of the newest members of the foundation board are Ossa Fisher, a partner with Bain & Co., and Scott Ginsburg, founder of Boardwalk Auto Group. Fisher, the daughter-in-law of Federal Reserve Bank of Dallas President and CEO Richard Fisher and his wife Nancy, represents the Fisher family, which funded the Nancy Collins Fisher Pavilion, as well as a special bench in honor of Richard and Nancy’s daughter, Texana, who died in 2010.

The Ginsburgs decided to fund the Ginsburg Family Great Lawn. The expansive grassy area, which can accommodate 3,000 people, will host a variety of events including concerts, performance art, festivals, and weddings.

“We wanted to support something that would represent our children,” Ginsburg says. “We have two older children and two younger children ranging in age from 3 to 30, and the lawn was something that people of all ages can enjoy.”Ginsburg came to Dallas from Washington, D.C., where he worked for Sen. Gaylord Nelson of Wisconsin, who established Earth Day. That background has influenced his family’s charitable giving.

“We have been focused on supporting things that improve or protect the environment,” he says. The deck park with its lush lawns, trees, and other plants is a perfect fit.

Ginsburg says he has a fantasy of sorts about the Great Lawn. He’d love to go down to the south end some early morning with a golf club, tee up, and just see how far the ball will go. “I already know I can’t hit it all the way to the north end!”