It seemed like something should happen. and yet, nothing did. We had our first drink at Toby Keith’s I Love This Bar and Grill, located inside the WinStar World Casino. We’d checked into the WinStar Hotel—a roughly $109-per-night hotel just over the Red River in Thackerville, Oklahoma—and we were ready for a drink, having fought through traffic, still heavy on I-35 at 8 at night.

We’d gone first to the WinStar’s New York-themed bar, all blue LED lights and glass panels, but it had loud dueling pianos that night and no food. “Jack served here,” the chalkboard outside the Toby Keith bar said, and that was enough to entice us. Plus, it was smoke free, a reprieve from the persistent, thick casino air.

We sat at the bar alongside a woman the bartender knew by name. She played games on her iPhone and listened to our conversation. A guy on the other side of us was working through his bowl of chili. There were maybe another dozen people there. I was waiting, somehow, for something different, for something interesting to happen. We were in a bar in a casino; casinos exist outside the ordinariness of life in a space often populated by outsized hope or the soft wish for luck. So much of the American ethos is about bootstraps and earning and working and deserving—and none of that applies when it comes to slot machines. Casinos hold the promise of being outside the regular rules. And, of course, the WinStar belongs to the Chickasaw Nation. Technically, different laws do apply. So I sat and waited for something or someone outside the ordinary.

Very little happened. People ate, had a drink, and left for home or to go back to gambling. The casino, set alongside squares of undeveloped land, sprawls larger than a university campus. There’s a 3,000-seat event center where acts like John Mayer play. Trucks and piles of dirt promise more growth (another hotel and some banquet space, among other things). The WinStar claims its 380,000-square-foot casino is the third largest in the world. The casino comprises eight “cities”: Rome, Vienna, Cairo, New York, Beijing, London, Paris, Madrid. Inside, each section is largely indistinguishable from the next. There are eight crystal dragons dangling from the ceiling in Beijing, for example, but at eye level most everything is the same.

The four city bars are not bars in any real sense of the word. In part that’s because they are open, barely separated from the casino floor with its ringing slots. And in part it’s because every single seat at the bar I saw has video poker. No one looked at each other. No one talked. As best I could tell, the bars are frankly just a place to get drinks faster than you can from waitstaff on the floor.
The place where people drink and talk is at the tables. We joined three guys from various small towns, all drinking Coors Light from a can (you buy your drinks, even at the tables). We played small-stakes blackjack, $5 minimum bet. They were 30ish and chatty, married and courteous. One sang the praises of the country life he had to leave to get work in the big city (Lufkin, I think he said). It was almost archetypal. 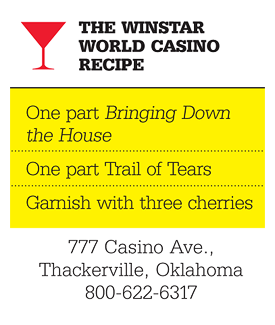 In the morning, a 40ish man and a younger guy (son maybe, or nephew) were playing blackjack and offering advice about splits and doubles. The older man was also flirting—hard, sweetly—with a dealer about to end her work. She was chatty, too, tired and funny and working the graveyard shift. There had been an altercation at the table behind us—apparently, a man had disputed whether he had in fact asked for another card—and our dealer told us how much she liked us and tables full of people like us who don’t cause a ruckus.

“You do your own hair?” Flirt Man asked the Dealer.

The tired Dealer squealed and giggled, waving her hands at him. Nephew shook his head in a combination of youthful disgust and admiration.

And there it was, the thing that happened: people talking, cards being shuffled, chips moving across felt. Man smiling at woman, asking about her day. Woman navigating fun customer and maintaining professional distance. Boy learning how it’s all done. The dealer didn’t bust as often as everyone hoped she would, and the house won more money than it paid out. Ordinary rules applied.