With his shaggy beard and dark painter’s cap, Graham Dodds looks out of place in Central 214, the restaurant he now helms at Hotel Palomar. It feels like a typical hotel restaurant—contrived modern decor, nondescript white leather banquettes, amber walls—so focus-grouped that it lacks any personality. And it’s not just the new chef’s appearance. Dodds’ culinary history is far too personal for such an impersonal space.

For the past three years, Dodds was the executive chef at Bolsa, the award-winning spot in the Bishop Arts District. He was in on the project from its inception, and his farm-to-fork approach—championing local and seasonal ingredients—was fresh at the time, not the marketing gimmick it has become. Dodds’ creations were simple, his flavors pure. Nothing was over-sauced or overwrought. Bolsa was an instant hit, and it established North Oak Cliff as a dining destination. D Magazine named it the 2009 restaurant of the year.

The intimate venue played to Dodds’ strengths, but it also had its limitations. Eventually the chef was ready for a bigger stage. “I had a great run at Bolsa,” he says. “But I feel Central 214 was a great career move, to come run a bigger operation and learn the ins and outs of a hotel restaurant.” True, it’s more of a challenge for Dodds, but Kimpton Hotels, which manages the Palomar, has given the chef plenty of flexibility. “They’re letting me run it like an independent restaurant,” he says.

Still, it’s hard to get past Central 214’s vibe. On one of our visits, a bachelorette party was downing flutes of bubbly and shouting, “Whooo!” In the bar area, hotel guests were tapping away on laptops. A nearby table wasn’t familiar with chef Dodds. The out-of-towners, however, were familiar with former Central 214 chef Blythe Beck and her self-billed “sexy New American cuisine.” She promoted the deep-fried, gravy-slathered fare on her Naughty Kitchen reality TV show, which aired on the Oxygen network for one unfortunate season. Beck’s menu read more like marketing shtick than a culinary point of view. But obviously she created a fan base.

Any skepticism was swept away when the salads arrived. His was a shaved celery root salad with honey crisp apple and pine nuts. Hers was a dinosaur kale with ricotta salata tossed in vinaigrette with minced artichoke.

Our table couldn’t help but admire the salads, and our neighbors’ oohs and aaahs sealed the deal. We ordered them. Both were stellar, especially the kale. Lacinato (aka dinosaur) kale is Dodds’ favorite vegetable, and he thought serving it as a salad would be a great way to highlight the hearty green. Shaved ricotta salata adds almost a meaty texture to the salad, and the vinaigrette adds the right dash of brightness. Though Dodds did plan on taking it off the menu (remember: he is all about seasonal produce), he’s found two farmers who are still growing the kale and will keep it for the spring.

Two appetizers of Dodds’ are destined to be Central 214 classics. Popcorn sweetbreads were inspired by a version at Roberta’s in Brooklyn, where Dodds worked last fall. His rendition turns out tender and crispy morsels resting in a pool of buerre fondue (“My play on movie theater butter,” he says) and a bit of lime zest. They are highly addictive, as are the triple-cooked fries. Here Dodds took inspiration from the summers he spent in Scotland. His fries are a thicker, oversize steak-fry version of classic British chips. He boils the potatoes until they fall apart, air dries them on racks to draw out the moisture, blanches them in a low fryer, air dries again, and then finally crisps them for eight minutes to get just the right texture. It’s a five-hour process that results in a tuber revelation with a rich, crackling exterior followed by a velvety mashed potato-like interior.

Most dishes we tried were part of the winter menu; they were savory and comforting. Oxtail ragout is one of Dodds’ favorite dishes. “I could probably eat this dish every day for the rest of my life,” he says. I agree. Dodds braises the oxtail in white wine and chicken stock for hours and seasons it with mirepoix and San Marzano tomatoes. He serves it under crisped gnocchi that is made with a puffy pâté a choux dough rather than potatoes. A basil pesto rounds out the plate. The dish has a glossy, brown sheen that matches its richness. The sinewy oxtail and slightly crunchy gnocchi are perfect foils.

Beef short ribs—which seem to be on every menu in Dallas—were fatty decadence. But the side of puréed parsnips stole the show. My dining companion took one bite of the silky side and declared, “If I were ever going to make love with a puréed vegetable, this would be my new lover.” 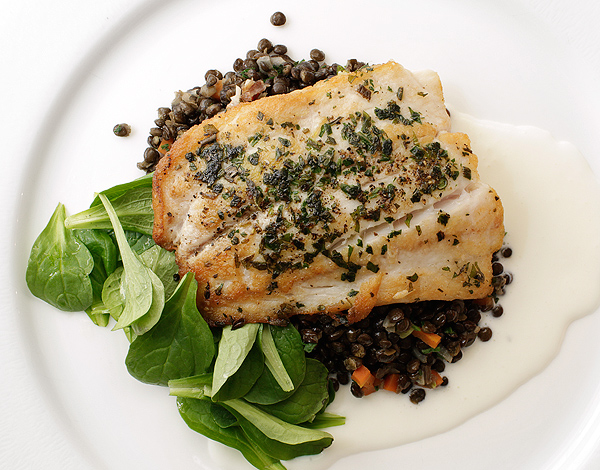 Striped Bass with Black Lentils photography by Kevin Marple
photography by Kevin Marple
There are plenty of lighter dishes on Central 214’s new menu. Naturally raised striped bass from South Texas paired well with hearty black lentils and a tangy goat milk yogurt. Vegetarian dishes usually get shortchanged in restaurants. Not so at Central 214. His cauliflower “risotto” is a clever play on the starchy classic. Here the chef grinds the cauliflower into small chunks and roasts them. He then combines it with a cauliflower-enriched cream and finishes it with Parmesan. The texture is uncannily like that of risotto. Served with wild mushrooms and a red wine gastrique, it seduced even the staunchest carnivore at our table.

Dodds’ lunch menu feels fresh from the farm as well: crispy pig ears with buttermilk dressing, an egg sandwich with bacon and piquillo peppers (a holdover from his Bolsa days), and a playful take on the classic BLT called the JLT (pork jowl, lettuce, and tomato). The lone misstep was, ironically, the most popular item on the lunch menu, the goat burger with bacon. The goat patty from Windy Hill Organics in Comanche, Texas, was flavorful and juicy, but the house-made bacon cut from the goat belly was tough and salty.

Dodds developed the dessert menu, which is executed by Gladys Ibanez. Much like his desserts at Bolsa, Central 214’s are a pleasant bunch but feel anticlimactic. The best one we sampled was the Pavlova, a meringue-based dessert with crisp edges and a soft interior. The meringue is covered with white chocolate cream and a cranberry sauce. I would have preferred the tartness of fresh cranberries against the sweetness of the chocolate cream.

Other desserts include a chocolate cake made with Ugly Pug black lager, house-made churros, and a lemon honey cake with sweet mascarpone. And then there’s the poudine chomeur, a fancy name for a traditional French-Canadian dessert dish better known as poor man’s pudding. It was confounding, nothing more than biscuit dough cooked in maple syrup and served bubbling in a cup at the table. It was the ugliest dessert I’d ever been served. But looks aren’t everything. Our spoons scraped every last bite of gooey sweet mess from the cup. A guilty pleasure? Yes, with an emphasis on the pleasure.

Central 214 doesn’t have the “it” factor that surrounds Bolsa. You don’t have the feeling that something special and unique is happening around you. The hotel restaurant has always struggled for an identity. The food has never been the inspirational focal point. That is, until now. With Dodds’ philosophy intact, Central 214 may finally be ready for its close-up. Dodds confirmed that the owners of the Palomar are renovating the restaurant, doing away with the modern look and crafting something more rustic and cozy to match his fare. The chef also hopes to install a rooftop garden and beehives. (He collects his own honey, too.) It will take awhile to see if Dodds’ fresh energy and talent will be enough to pump life into Central 214’s staid reputation. His food certainly deserves a big audience. In the meantime, pass the fries.

For more information about Central 214, visit our restaurant guide.