The Pin Show wasn’t supposed to be an event this year. Co-founder Julie McCullough Kim was done with it. After producing three of the shows, which highlighted independent designers, she decided they gobbled up too much of her time. But then Bryan Embry, owner of the Ross Akard Gallery, got wind of her plans. He didn’t like what he heard. He arranged a spot for a designer in the Fairmont’s Artist in Residency Program and convinced McCullough Kim to give it one more year. We’re glad she did.

Forty designers applied to be a part of the evening. Thirty-two were asked to bring in their lines. Twenty-eight made the cut. We fell in love with five of them. 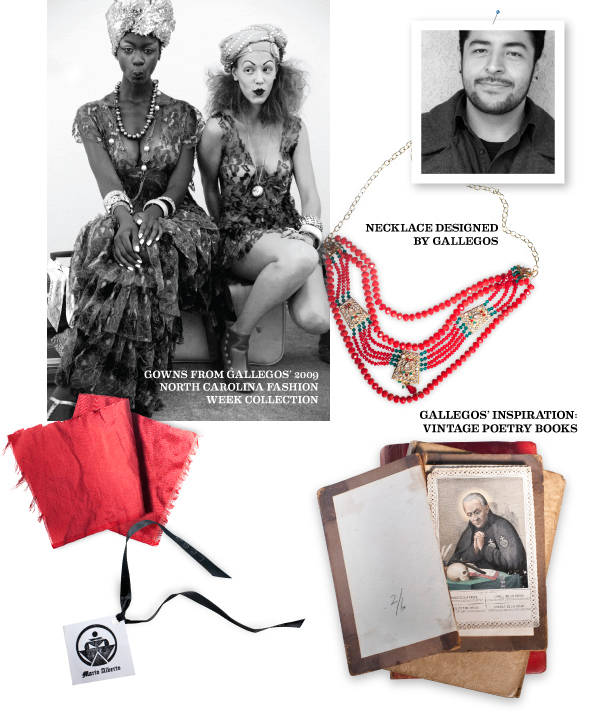 Line: Mario Alberto
Specialty: Cocktail dresses
and eveningwear
Purchase at: By appointment
only, 214-994-3912 or
[email protected]

Mario Gallegos remembers studying a couture gown in a magazine while a student at El Centro College. The gown had no way for a woman to put her arms through the sleeves. As Gallegos puzzled over the dress, his professor, Michael Anthony, asked him if it had to have sleeves. “I hit nirvana,” Gallegos says. “I felt those little words just completely changed everything. There are no barriers. I could do anything.”

The 27-year-old buyer for Clotheshorse Anonymous sits in his Deep Ellum loft on a slightly broken Edwardian chair he can’t bear to throw out. He’s surrounded by books, statues, and his birds. His creations are everywhere. A beautiful rose lace gown sits on a mannequin, a hand-beaded organza skirt hangs on a rack, and shoes with vintage lace, beads, and glitter adorn a pile of books. For years, he has created lines for others. But Gallegos has decided that 2012 is his year. “I’m going to take a risk with whatever cash I have,” he says. He wants to create a ready-to-wear line with oversize jackets and bright colors. It’ll be a change from his current romantic ballgowns. “I’m a Gemini,” he says. “I’ve got a good side and a bad side. It’s the bad side coming out.”

Where do you get inspiration?
Everywhere. Books, movies, online.

Name one person in Dallas you’d like to design for.
My fairy godmother, Jan Strimple 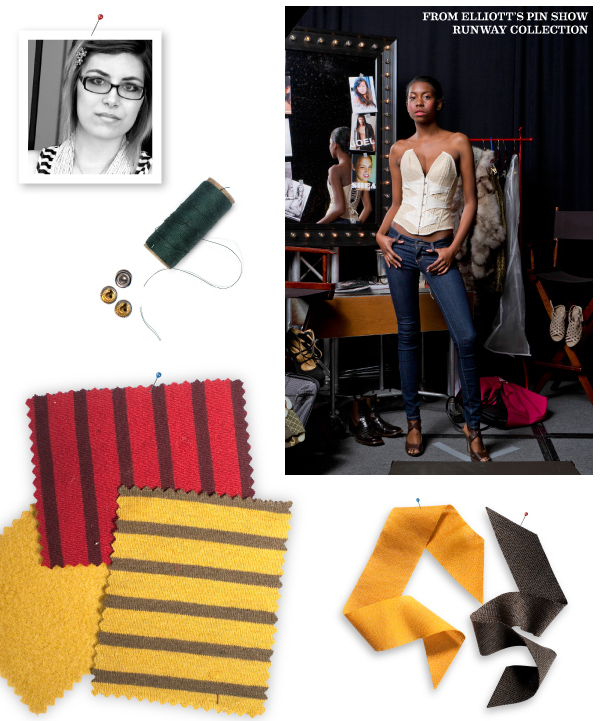 At the end of a long day as an associate designer of dress and tailored menswear at the Haggar Clothing Co., Charlotte Elliott comes home to her 1940s apartment in the Oak Lawn area, eats dinner, and then sits down on her black couch. She pulls one of her two sewing machines up next to her and begins sewing clothing for her line, Yomono. “It’s kind of a play on the word ‘komono,’ ” she says. “I like that. But to be honest, I don’t really know where it came from.” It was just one of the names the 25-year-old came up with while at the Art Institute of Dallas, and it stuck.

Elliott launched her line in 2009. Since then, she’s built a successful Etsy shop and has booths at IndieGenius and Art Is Art.

One of the focuses of Elliott’s line is to leave behind a small ecological footprint. Most of her materials are reused or reconstructed. A chic dress fitted to a mannequin in the corner of her quaint apartment is the perfect example of her ability to reuse. It’s made of three types of men’s pants, with the grays from the pants creating a subtle color blocking. But her main area of expertise is corsetry. “I always admired corsets,” she says. “They have so much workmanship and you can really see how much passion goes into them because there is so much refined detail.” But working with such intricate designs requires a lot of time, something Elliott’s okay with. “If I didn’t love this as much as I do, I wouldn’t sacrifice my weekends and neglect my boyfriend,” she says. “If I didn’t love doing this as much as I do, I wouldn’t be doing it every day after work.”

Where do you get
inspiration?
Film noir

Name one person in Dallas you’d like to design for.
Burlesque performer Cora Coquette

Who are your favorite designers?
House of Courreges and Alexander McQueen