It was merely a coincidence that the latest racial and housing discrimination lawsuit against suburban Sunnyvale was filed this year on Martin Luther King Jr. Day. Mike Daniel, the venerable Dallas civil rights attorney, explained that when you have filed as many briefs and suits as he has against Sunnyvale, “sooner or later one’s going to fall on that day.”

Twenty-four years have passed since he filed his first suit against the town, which sits between sprawl-covered Mesquite and Garland, 12 miles east of downtown. It has a feel one resident described as “pseudo-country,” with trees, grass, “and occasionally a cow.”

Daniel’s client, Mary Dews, was a counselor for the Dallas Tenants Association in the mid-1980s, and her job was to find decent, sanitary, and affordable apartments for black families. She found nothing of the sort in Sunnyvale. It allowed only single-family houses on 1-acre lots. Dews’ lawsuit alleged Sunnyvale’s zoning “perpetuates racial segregation and residential patterns both within Sunnyvale, by maintaining its all-white character, and within Dallas County, by placing one of Dallas County’s suburban cities, with a large geographical area with the potential for development of multifamily and other affordable housing, effectively off limits for black families of low and moderate incomes.” According to federal data, there are three cities in Dallas County with no government-subsidized housing: Sunnyvale, Highland Park, and University Park.

After a trial, U.S. District Judge Jerry Buchmeyer ruled in 2000 that it was no accident that, in 1990, Sunnyvale had only 16 blacks among its 2,228 residents. The evidence showed that Sunnyvale’s incorporation in 1953 came as a response to efforts to build federally subsidized developments in that part of the county for black soldiers who had served in World War II and Korea. And if there was any question about the intent of the zoning, Buchmeyer’s opinion quoted one developer who, in 1985, was bluntly told by a Sunnyvale town councilman that he liked the 1-acre minimum because “it kept niggers out.”

Mews and Buchmeyer have both passed away, but the 1988 lawsuit remains unresolved, and Sunnyvale still doesn’t have a single apartment unit, affordable or otherwise. The town reached a settlement in 2005 with the Inclusive Communities Project (ICP), a Dallas fair housing nonprofit organization that took over pressing the case, to provide at least 70 low-income units. Five years later, Sunnyvale was found in contempt for failing to live up to the agreement.

To satisfy the court with a remedy, the town last year approved zoning and financial incentives for a developer to build 94 units. Their location could hardly have been more isolated: an industrial-zoned section of town away from any existing homes and adjacent to a sprawling warehouse on a road busy with 18-wheel trucks. Still, U.S. District Judge Reed O’Connor ruled in July that the town had complied with court orders by approving the development, which was given until 2013 to obtain tax-credit financing.

Meanwhile, Sunnyvale declined ICP’s request to build its own apartments on a 15-acre property that ICP purchased in 2009 on Belt Line Road, Sunnyvale’s main street. The rejection prompted ICP and Daniel to file suit in January and again accuse the town of using zoning to enforce racial discrimination.

David Byrd, who served as Sunnyvale’s mayor for a two-year term ending last May, says there may have been “racial overtones” to what the town did 20 years ago. But the 62-year-old semiretired IT consultant says Sunnyvale is different now, and that is reflected in its more diverse racial makeup. Today, blacks represent 5.7 percent of the town’s 1,639 households; Hispanics 6.6 percent. Indian-Americans, who are counted in census figures as Asian, are by far the largest minority in the town, making up about 20 percent of its 5,130 residents. As for zoning policy, Byrd says developments such as the ICP apartments get turned down because “the town has, if you will, high standards.” 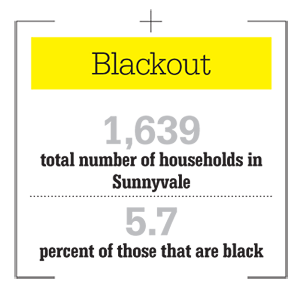 Lee Adams, a burly political gadfly who put out a town newspaper, the Sunnyvale News, until health problems forced him to stop last year, says white residents have fought low-income housing with a passion. “When ICP bought that land, you had maybe 20 people whose neighborhood adjoined it show up to complain,” he says. “You had 100 people who live nowhere near it at the meeting, and they were even madder.”

For decades, Sunnyvale kids went to North Mesquite High School, but when the student body there became predominantly Hispanic and black over the past decade, Sunnyvale residents voted to build their own high school, which opened in 2009. “The kids hated giving up their school. They liked North Mesquite,” Adams says.

Riding around town with Adams at the wheel of his pickup, I see the changing housing styles: older ranchettes with their horse pastures and newer subdivisions with 6,000-square-foot Hummer houses. Here and there someone has planted a stunning million-dollar home. “They think they’re Southlake, but look at this,” he says as he pulls up to the public library, which is housed in a cramped metal building.

“I’m on the outs these days, but I wasn’t always,” says Adams, describing how people on the town council or with some clout would share their frank opinions about the housing case. “The attitude is these are low-income, scummy people, and we don’t want these type of people in our town,” he says. There is resentment about a Dallas fair housing group or a federal judge telling Sunnyvale what to do, he
says.

Adams, who lived in Sunnyvale for several years but now resides in a neighboring town, says he abhors “the way some people think they’re above other people.” It was that sentiment, he says, that moved him to write a letter to Judge O’Connor about what he says was a deliberate effort on the town council to misrepresent and kill the ICP proposal.

His letter claims that a conspiracy was hatched by Mayor Byrd, Town Manager Scott Campbell, and Town Attorney Terry Morgan to lie to the council about the suitability of ICP’s plans. The letter also says that Council Member Pat Wiley would be willing to testify to that fact in court. Byrd disputes Adams’ allegations and says there is a paper trail proving him wrong. Wiley says Adams’ letter is truthful, but he declines to discuss details. “I’m already in hot water,” he says.

Wiley, who moved to Sunnyvale about seven years ago and opened an auto body shop in a newer commercial area, says residents tell him they fear affordable apartments will harm property values and crowd the schools. “People don’t want change out here, period. It’s the land time forgot,” he says. He sees the issue from another angle, as the father of someone who could use a subsidized apartment. “My son was hit by a drunk driver when he was 16, and he’s disabled. I’m supporting him now, but someday I can see him living in something like that. That’s not the way the snobs around here think about it.”
Write to [email protected].