I thought, ridiculously, “You are not in a good position to be rude.” I knew now what I had really seen. A cop had just shot a handcuffed prisoner in cold blood. Earlier, I had just thought that might be what I’d witnessed. Now I knew.

“Hey, I know him. It’s what’s-his-name from over at Channel 5. Used to be bad news at the Times Herald.” Detective Roscoe Borger took over. “Did ya get all that on film?” he asked cautiously.

“Can’t tell,” I covered myself. “I might have been too far away. The old light may not be what it used to be. Needs a charge every once in a while to get it up, like a lot of us.” I tried to inject a little levity into the tense atmosphere.

I knew I might be in trouble no matter what I said. I wondered if I might be “rubbed out” just to keep me quiet. I’d learned a lot about police doings when I was a reporter in Abilene. But then Abilene was a place where anything was likely and not always fair.

I kept my mouth shut and let the cops think what they would. Then I got the hell out of the neighborhood and off to Fort Worth as fast as my four cylinders could get to the end of the turnpike.

The 10 o’clock news on Channel 5 was the only station to have the shooting. The story started with pictures of the body being loaded into the ambulance. The story reported, “Police are still trying to untangle the events surrounding the shooting of the operator of a house of prostitution tonight on Dallas’ south side.” No harm to the department in that report. The ball was now on the police side of the net. But what about the shooting pictures? Did they not turn out? Was it too dark? I never found out, but the pictures I thought I shot never showed up on the news. 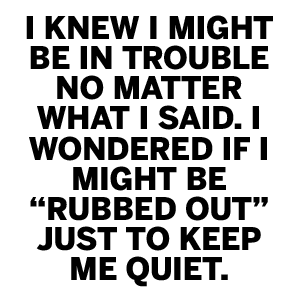 Speculation among police people was that Shipp “lost” them. The police department, of course, had to come up with its own final chapter to the story. So, weeks later, after an in-house investigation and grand jury attention, the police decided that the shooting was in self-defense. I kept my silence. Shortly after that, I noticed that I now had the run of the police department. No door was closed. Files were opened. News tips came from everywhere. I was the golden boy of the police.

When I followed the detective back into the burglary bureau interrogation room, the bureau captain gave me the old thumbs-up sign. And before I had completed my witnessing business, I was “howdy’d” by a half-dozen normally sober, sour-faced detectives. The word was out that I had “dumped” the shooting pictures and saved a cop’s ass. But as I signed my name to the suspect’s confession, I thought to myself,  “I wonder what I would have done if I had had the pictures on the film.” I’d never know. Neither would the officers who called me a “darling.”

I noticed that the prisoner who had just given a statement looked like he might have been the loser in a one-legged, free-for-all, ass-kicking contest. He was badly bruised, to say the least. I started reading the statement.

The suspect’s name was Finis Blanketview. He said he was an Irving plumber. He developed an interesting side action when he decided to case property as a plumber and then plunder it as a burglar. Unfortunately, the territory that he plundered belonged to the French boys, a notorious gang from the Balch Springs area south of Dallas. Having for some time staked out the Denton Road industrial district, they were the best burglars in the business. And these boys had no need for a partner.

When they got wind of Mr. Blanketview’s plans to help himself to some of their action, they lay in wait, hijacked the intruder, and then just beat the holy crap out of him. They left him tied up inside a heavy machinery warehouse and called the cops.

I put the police “beef” sheet back in order and replaced the paper clip. I looked at Finis, wanting to laugh. How could a guy be so dumb?
Then I had a great idea. It wouldn’t hurt to ask. “How would you like to be the main man in a television news story about burglary?” Finis was happy to oblige. In the subsequent TV documentary, Finis was the star, acting more like a hero than a petty thief. And my standing with the police was only enhanced.

The inevitable result of this fame happened about a year after I first met Finis. A deputy sheriff from Bill Decker’s office called me. “Ya hear about the robber who held up a bank down in Mansfield and is now holed up in an old flophouse hotel in downtown Cleburne?” The deputy continued, “Well, get this. He’s keeping a bunch of lawmen at bay and says he’ll give up if you will come down there and walk him out.”

I was totally astonished. The Johnson County sheriff radioed the Dallas County Sheriff’s Department and told them to get “that television newsman” down there. I wasted no time getting to downtown Cleburne. Of course, the little orange unit was flanked front and rear with police vehicles with sets of lights and sirens.

As I wriggled my way through the crowd, I had “interview” on my mind. Lugging my big camera and managing the sound camera, too, I shouted from the edge of the crowd. “Finis, that you up there? I’m comin’ up. Okay, Finis?” It took several attempts to get a response. But there it came rather weakly: “Come on up—by yourself.”

I read every face as I made my way through the crowd. I wanted no unexpected moves. I knew county sheriffs and their deputies. They made the law and they were the law. And they would keep order. Fortunately, I didn’t notice anyone who was about to try foolishly to become a hero. Probably they figured there was going to be only one hero this day. Just who was yet to be determined, even if it cost one television newsman.

Thank goodness Finis was in a room on the second floor. That sound gear was a hernia-maker. “Finis, I’m here. Open the door before I drop this stuff!”

“By yourself?” Finis asked, as he eased the ancient, creaking door open enough for me to squeeze in. “Oh! Excuse me! I didn’t open it enough. Got your interview camera, I see.” He spoke knowingly, remembering the interview from his glory days on television.

One of the best lines in the interview was Finis saying he’d “rather surrender to the French gang than give up to that pack of police wolves down there.” Poor Finis. He really wasn’t a bad guy. Just not too smart—or lucky. I got my exclusive interview and a little glory. Finis got safe passage to jail without getting shot. As I passed through the curious and relieved crowd, I thought it really did pay to be a plumber’s friend!