A couple of guys in their late 30s chatted with me over a tree stump stool at Goodfriend Beer Garden and Burger House, the new East Dallas pub. They live down the road, were hanging out. My friend Susan arrived, ignored the big TV, and slid onto the couch next to me. Her hair and coat smelled crisp like winter. The guys left, and we stretched out our legs a bit.

Susan murmured something about how she’d forgotten that people go out at 9 on a Thursday night. Though she was once a hipster and still has the style to show for it, she now has a year-old daughter and a lot more Thursday nights at home. She lives down the road from Goodfriend, so the trip to the bar was easy, and, in fact, she and her family are big fans of Good 2 Go Taco next door.

We talked poetry and books, tenure and in-laws, the sweet sweetness of our kids, and we ate, oh, maybe a third of the enormous Spuds MacKenzie: waffle fries with bacon, cheese, scallions, and jalapeños. We split a $9 homemade black bean vegan burger with an avocado tostada inside an Empire Baking Company bun. Buns excepted, the food comes from the popular Good 2 Go folks next door, who pass burgers, salads, and sides through a literal hole in the wall to the Goodfriend servers. 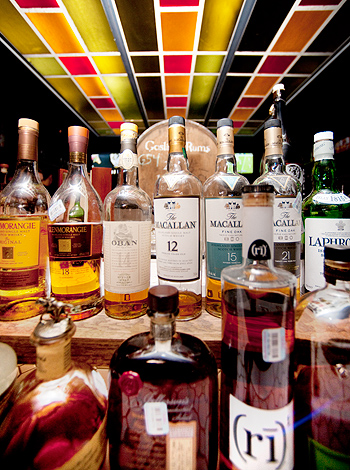 photography by Elizabeth Lavin
photography by Elizabeth Lavin
Our server may have had a nose ring; I can’t remember exactly. But if she didn’t, she could have. The place has a hipster vibe. It’s the kind of pub that looks better through thick, black-framed glasses and a green-living soul. On both my visits, I passed on the $7 designer cocktails on the Magnificent Seven list and opted instead for beer from the ever-changing selection because cold beer on a cold night inside a warm pub feels good. I drank Rheingold in a can, Franconia Wheat on draft. Susan had a Brooklyn Brown in a bottle, and together we moved a heavy, old-school sewing machine (decoration, ambience) farther down the bar so we had more elbow room.

East Dallasites’ pent-up hunger for a pub with cool beer and homey space had led to an avalanche of online chatter about Goodfriend before it opened in October. The first night I went in, I was tired, grumpy, and not in the mood to work, even if work meant having a burger and beer. I had hauled myself across town when I would rather have gone to bed, and wondered if I’d be let down or just unimpressed. 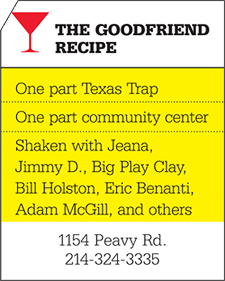 Two minutes after I walked into Goodfriend, I was sold. It was less about any one detail, less about the recycled materials in the bar, or nonintrusive TVs, or comfy patio. It was about the overall feel of the place. People were chatting with each other. Some had brought their children. There were middle-aged and young people talking, turning from one conversation to the next. Every seat was full. Everyone seemed happy to be there and easy in their own skins. It made the place feel neighborhoody and good. As if the owners, Josh Yingling and Matt Tobin from Vickery Park, had somehow done the hardest thing: being in the right place at the right time.

Timing is everything, the old wives say. It’s funny how you can feel it, that sense of right-place-right-time-ness. When I worked at a technology/video games magazine in San Francisco in the late ’90s, I could feel the warp of the world shifting under my feet, feel the swell that was rising and changing the shape of American life. When I met my husband, I felt the click and pop of something falling into place.

So much of life is blind luck; so much of luck is timing. Hard work, too, but also chance, when you and the world happen to be ready for each other. Or so I remind myself when facing brick walls and rejection letters, wishing I had done more, been more, needed less sleep. Hard work is an important part, but it is only one part. Another piece is having the right idea at the right moment, being in the right place at the right time.

“Baby-sitter-worthy,” Susan said of Goodfriend, “as in, I’d pay for a baby sitter to go back there with my honey and get a burger.” As she said it, I heard the click and pop of a neighborhood bar falling into place.