“If at first the idea is not absurd, then there’s no hope for it.”
—Albert Einstein

It was killed in 1895. its corpse was reanimated in 1913, grafted together with mismatched body parts like Frankenstein’s monster—and, like Frankenstein’s monster, it was given a diseased brain. It takes 17,000 pages of the Federal Register to describe its horrifying features and another million pages of case law to interpret its malevolent intent. It takes 6 billion hours of time and $400 billion in costs each year to appease it—or to sneak around it. We sent a Super Committee of the brightest minds of Congress to tame it, and it threw them in the river like Boris Karloff’s monster did to the little girl. And now we’re trying to see if giving it a new haircut (a surtax on millionaires and billionaires) or a fingernail trim will make it behave.

It’s the United States income tax code, and we need to put a stake in its heart and bury it for good.

Question: if a group of relatively smart people with no political axe to grind and no pet constituency to protect were given a blank canvas and the mandate of devising a scheme to finance their collective government with minimal impact on economic activity, would they pick an income tax? (Emphasis on smart and nonpolitical.) Answer: not in a million years.

I was a corporate tax attorney at a major downtown law firm for seven years, seven years of my life I can never have back. I struggled through many of those 17,000 incomprehensibly arabesque pages of code sections and regulations. I read countless tax cases. I know a thing or two about taxes. Here are the problems with an income tax:

* First and foremost, it’s all about definitions. What is income, by the way? Sounds simple, but it’s not. Revenue is not income. Gifts are not income. Inheritances are not income. Gains from the sale of some assets are income but some are not, and they’re taxed at different rates. Dividends on stocks are sometimes income and sometimes not, and they’re taxed at different rates. Some expenses reduce income and some do not—and some are amortized or depreciated over extended periods. The income of individuals is taxed differently than that of corporations or trusts. In short, there’s a lot of room to play games.

* There are timing issues. When is income realized, such that the person who earns it should be taxed? One guy gets millions of dollars of cash flow, but it’s not taxed because it’s not deemed “realized”—or he’s figured out a way to accelerate expenses he hasn’t actually paid to shelter it. A different guy gets a K-1 on phantom income and is crushed by a tax bill with no cash to pay it.

* There are collection issues. For everyone other than W-2 wage-earners, the income tax is essentially an honor (or dishonor) system. The guy who mows your lawn and whom you pay in cash may or may not report his earnings. We can only speculate. But that’s a penny ante problem, you say. A lawn guy? Well, it’s not. The untaxed underground economy is estimated to be $2 trillion, meaning $400 billion to $500 billion in tax goes uncollected each year. And that doesn’t take into account the guy who sells stock in his private company in a nonbrokered sale. He can make hundreds of thousands, if not millions, on the sale. But we’ll have to count on him to remember that gain when April 15 comes around, because there’s no entity that records the sale and lets the IRS know.

* Finally, there are earmark/pork-barrel problems. The tax code is one of Congress’ favorite ways to reward its biggest donors with credits, deductions, and exemptions. It perverts the tax code beyond recognition.

And here’s what this mess has produced: almost half of our citizens pay no federal income tax at all (far more than half, if you count the kids who, by Newt’s way of thinking, should be working). By contrast, the top 5 percent of income-earners paid almost 60 percent of the nation’s taxes—but they earned almost a third of the entire country’s income, which is why you have class warfare and plenty of justification for animosity on both sides. (As an aside, in 2009, 1,400 millionaires didn’t pay any federal income tax. The real class warfare should be between the millionaires who bore a disproportionate share of the nation’s tax burden and the 1,400 millionaires who skated owing nothing. I need to find out what accounting firm they’re using.)

Think of this: when you have people who made a gargantuan amount of money (I’m looking at you, Andy Beal) paying white-shoe law firms more than $1 million for a tax opinion (I’m looking at you, Jenkens & Gilchrist—or I was, until you were sued out of existence) to devise complex tax shelters named after a serial killer to shield hundreds of millions in capital gains that the bounty of this country allowed you to earn, there is something wrong with our tax system. And when GE can file a 57,000-page tax return and pay no tax on $14 billion in profit, it’s game over.

So, if we gave Congress a mulligan on its tee shot off the Sixteenth Amendment, what tax system would smart/nonpolitical people choose?

Perry’s 20 percent flat tax? To its credit, it has the appeal of fitting on a notecard that you can tug out of your front breast pocket when giving a drunken speech in New Hampshire, but that’s about it. You still have each issue previously identified—it’s still an income tax—but you’re guaranteed to reduce revenue. Perry’s plan allows the taxpayer to choose between a 20 percent flat tax and what he or she would owe under the old system. Ergo, everyone would choose whatever’s cheaper, and tax receipts would go down. And worse, you would spend even more time and money figuring out two different tax returns. (And not to get bleeding heart here, but a 20 percent flat tax might be harder for lower income people to bear than someone like me or the readers of this magazine.)

By the time this article appears on the stands, Perry might already be out of the race. But never fear, Newt Gingrich has done him one better—a 15 percent flat tax!—with the same choice to do your taxes under the old system. And Gingrich is supposed to be the smart one.

Herman Cain’s already gone but still flogging his 9-9-9 plan. As a dial-around long distance telephone plan, it works great. As a comprehensive tax system, not so much. Whereas it does eliminate the distinction between corporate and individual earnings, all the definitional, timing, and collection issues remain. Plus, a 9 percent sales tax is regressive on lower income people—unless you exempt food, clothing, etc., in which case you reduce tax receipts.

Donald Trump’s net worth tax? Remember him? In 1999, he proposed a 14.25 percent net worth tax. Okay, not something you would want to be hit with every year, but what about it? The total net worth of U.S. households in 2009 was $54.2 trillion. The president’s budget for fiscal 2012 is $3.7 trillion. Therefore, we would need a 6.8 percent net worth tax for a balanced budget. Every year. Obama would love it, but there are just not enough detestable millionaires and billionaires to get the job done. The total net worth of the richest 400 individuals in our country is $1.53 trillion according to Forbes magazine. If we imposed a 100 percent tax on all of their wealth, wiping them totally out, it wouldn’t pay even half of the annual budget. And then what would we do next year?

Besides, a net worth tax is unworkable. You have valuation issues (What’s my private company worth?), liquidity problems (I’ll have to sell my farm to come up with the money to pay the tax on the value of my farm), and tax dodging (Er, let’s not talk about my overseas assets and cash held in foreign accounts). We would be stuck taxing people’s bank and brokerage accounts—causing every sentient person to withdraw all of his or her money from banks and brokers. And that would be the end of the country as we know it. 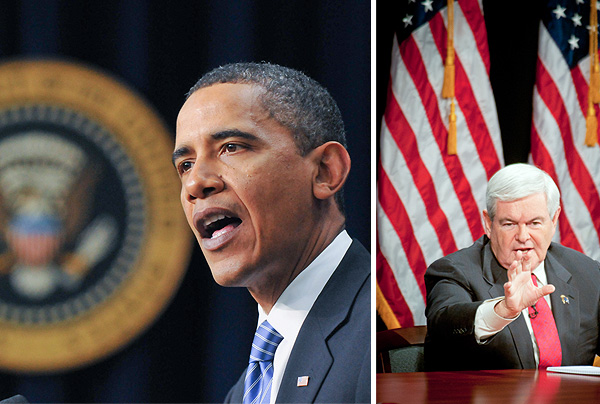 President Obama and Newt Gingrich don’t agree on much. But both sides would support overhauling the tax code. photography courtesy of Corbis
What about the Americans for Fair Taxation’s 23 percent solution? A national sales tax is a neat idea—except that (i) at almost a quarter of the price of the goods themselves, it would be horribly regressive; (ii) not enough transactions actually constitute “sales”; and (iii) like the net worth tax, the impact on economic activity would be dramatically adverse.

A property tax? Sorry, but the Constitution prohibits it (unless it’s apportioned among the states by numbers). And even if it didn’t, you would have the same valuation, liquidity, and tax-dodging problems you have with a net worth tax.

Really what we need is a tax system that doesn’t focus on who is taxed and at what rate, but what is taxed and when. Preferably, it would get at income, net worth, property, inheritances, sales, loans—the whole schmear. It would have the broadest reach possible, which would allow for a low rate of tax.

Here’s a bit of heresy for the Democrats: everyone, even the poor, needs to pay federal tax. Everyone enjoys the stability of our government and the security of our military, benefits from our monetary system, and gets around on our roads. Everyone needs to pay something for it, to be invested in the decisions our government makes.

That said, the ideal taxing system would follow the money.

So here’s a bit of heresy for my fellow Republicans: the middle class needs to pay disproportionately more than the poor, the rich need to pay disproportionately more than the middle class, and the über rich need to pay yet more. Why? Either we’re going to have a shared community where the ones who have more contribute more, or we’re going to have a society like Sao Paulo in Brazil, where millions live in squalor in favelas, and the rich hundreds live in walled communities under armed security and drive around in armored Mercedes.

And while you’re reeling from that bit of apostasy, here’s another: no organization should be exempt from federal taxes. I belong to a rich church. It does wonderful things for the community. It also benefits from the stability of our government, etc. It needs to pay federal taxes. My old law school has a $32 billion endowment, up a whopping $4.4 billion from just a year ago. Its endowment is larger than the GPD of more than half of the world’s countries. It’s obscene. It needs to pay federal taxes. (And it needs to stop asking me for money.)

The ideal taxing system would be immune from definitional hanky-panky. It would match the collection of the tax to when the money is there.

In short, the ideal taxing system would be a small tax on every single monetary transaction.

That’s right: a miniscule tax, say 1 percent (or less—depending on what the annual dollar total of every single transaction in the country adds up to), on every single monetary transaction, including wages, gifts, inheritances, property sales, rent payments, retail sales, legal services, company acquisitions, loans, and sales of stocks and securities.

Would this hurt the working poor? Let’s assume that someone earns $19,000 and that his employer passes the entire tax on to the employee. A 1 percent tax on $19,000 is $190. The employee would pay a 1 percent tax on all his spending and savings (if he’s able to put anything away, that is). So another $190 of tax, for a total of $380 on his entire earnings, spending, and savings. That’s hardly regressive.