The Dallas Opera begins its third season at the Winspear this month on a somber, if not exactly a flat, note.Over the summer, the company canceled a production, Leos Janacek’s 1921 masterpiece, Katya Kabanova, which it had staged once before, beautifully, in 1997. The Dallas Opera must figure that a prudent amputation is better than losing a patient’s life.

No matter what boosters will tell you, the arts are not exactly thriving anywhere. Things have not gone well for most arts organizations over the past few years. Revenues are down; staffs are being cut; changes are being made. In Dallas, opera might have suffered the most. It is expensive to produce under the best of conditions, especially now that “the visuals” cost almost as much as the singers. But The Dallas Opera incurred additional costs by moving the company to the Winspear Opera House. Not only is the venue itself more expensive to operate, but now the company has just 2,200 seats to sell, where once it had more than 3,400 at the Music Hall at Fair Park. Instead of four performances, the company must stage six to accommodate the same number of patrons. More performances require more labor. Stage hands don’t work for free.

Given August’s grim, swooping and leaping, gyrating turmoil on Wall Street, people may buy even fewer seats now than before. When the going gets tough, the customers go home. From my experience, The Dallas Opera can’t afford much slippage. Last spring I was riveted, for four hours, during two performances of the company’s first production of Boris Godunov. Not so, other attendees. Each time, the house was not entirely full at the start of the first act. Two hours later, following the single intermission, the house was even less full. People applauded on their way to the parking lots after a long Act 1.

To say the least, then, The Dallas Opera stands at a pivotal moment. What is the future for the company in its second half century? I sat down last spring with Keith Cerny, general director and CEO, as he was finishing his first year at the helm, to find out. This was before the latest wounds. How, I wondered, will a man with a Ph.D. in econometrics keep the Winspear humming?

With a long, expressive, engaging face (think of Ray Bolger), and a calm, engaging self-presentation, Cerny combines gravitas with youthfulness. He tends not to betray emotion. He measures his words thoughtfully, but he has no aura of self-importance, let alone heaviness. He looks younger than 48, more like a boyish dad, which he is, than a head honcho. His four sons—8, 10, 12, and 17—all attend public schools. With his British wife, Jennifer, he has happily settled into a 90-year-old house in tree-shaded Highland Park. And he has taken over the reins of The Dallas Opera at both the best and worst of times.

The best? Now that the company has established itself in the Winspear, it has found it easier to engage top-notch vocalists who would otherwise be at least reluctant, and perhaps totally disinclined, to perform in Fair Park. When the baritone slated to sing the title role in Verdi’s Rigoletto last spring backed out at the 11th hour, Cerny and Jonathan Pell, the company’s artistic director, persuaded the Italian Paolo Gavanelli to modify his schedule and come to Dallas. The results were excellent. Opera companies must plan well in advance. (One of Cerny’s first moves was to put The Dallas Opera on a five-year schedule, rather than three, in order to accommodate both artists and costs.) Last-minute glitches always occur; singers get sick and cancel. The Winspear’s fame helped save the day last spring.

The worst? Budgets. Money. It’s what every artistic CEO must think about. Luckily, Cerny comes to us with talents on both sides of his brain and complementary credentials. He grew up in Berkeley, not in a musical family. At 7 he already knew he wanted to play the piano; he also sang. In college he majored in physics and music. And to top it off, he earned an MBA degree from Harvard, as well as a doctoral dissertation on option pricing theory. He worked, sometimes merely in an advisory capacity, for seven other opera companies, including San Francisco’s, before heading to Dallas. Like any other suit, he sprinkles his conversation with words like “brand,” “structure,” and “initiatives,” but coming from his lips the lingo of the board room sounds neither pompous nor boring, just part of the process needed to get the product (opera) and its message (sales) out to the buyers (audience).

The days are long gone when Larry Kelly and Nicola Rescigno, with the blessings of Maria Callas as a fairy godmother, could come to Dallas from Chicago without (as my grandfather would say) “a pot to piss in” and exclaim, like Mickey Rooney and Judy Garland in Babes in Arms: “Hey, kids, let’s put on a show!” Grand Opera is Big Business and requires more than a wing and a prayer to keep alive. And The Dallas Opera has had money problems before now. In 1970, Dallas Civic Opera—the name of the earlier incarnation—racked up a $1 million deficit. Checks bounced. When Helga Dernesch, the great Austrian soprano, arrived in the fall of 1971 to start rehearsals for her American debut, in Beethoven’s Fidelio, her first words were, “Where is check and where is bank?”

There have been some pretty rough spots during the past few years for the company as well. In 2008, George Steel came and then decamped for New York within five months. Last May, the stalwart Graeme Jenkins, The Dallas Opera’s music director for 17 seasons, who has molded the orchestra into a splendid ensemble, said he would not return when his current contract ends in the 2012-2013 season. 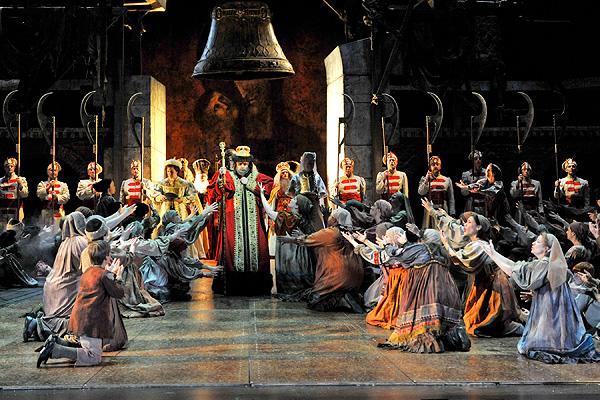 The Dallas Opera’s production of Boris Godunov photography courtesy of the Dallas Opera
This past year at the Winspear had moments of transcendence and moments of ordinariness. Such is to be expected. The season, as befits Dallas tastes, tended to the safe and conservative side: so-so productions of Don Giovanni, Anna Bolena, and Roméo et Juliette, but then the dazzling Rigoletto and the awesome Boris Godunov. Notice: nothing avant garde or discordant.

I talked to Cerny about audiences, how to build them, keep them, challenge as well as entertain them. I learned a lot. For example, 25 years ago, two-thirds of opera companies’ revenues came from ticket sales. Now it’s about one-third, at best. Development and endowment, not ticket buyers, keep a house in the black. And another thing: although opera seems to appeal to the old, the gray, and the wealthy, opera audiences really are no grayer than they ever were, and it’s important that they remain gray, because that’s where the money is. People in their 50s, with children away from home, perhaps out of college and off the payroll, are the ones who need to be cultivated for gifts.

The Dallas Opera has announced a seven-figure deficit for the fiscal year just past (the estimated shortfall is between $3.8 and $4 million). But it also raised $1.25 million in a special appeal last July and has secured an additional $3.5 million in multiyear commitments. The projected 2011-12 deficit will be smaller, and the company has plans to get back into the black at the end of the 2014-15 season. Next season, in addition to chucking one entire production, it will cut down on the number of performances of three of the operas. Only Verdi’s La Traviata and Mozart’s The Magic Flute, tried-and-true audience-pleasers, will get a full roster of six performances. Any junior high school student will tell you that this reduction will cut revenues as well as costs, but Cerny must figure that it’s worth doing.