The worst “burger” was the black bean veggie, so poorly conceived that it felt like a big middle finger to vegetarians. Veggie burgers generally fall into two camps: grain or black bean. A good one has body and a flavor profile that eschews the usual cumin. Described as a black bean patty, The Commissary’s was a flaccid blob of black bean purée smeared between two cardboard-stiff flour tortillas. Was their stiffness deliberate, or were they just stale? You couldn’t pick it up and eat it like a burger; the two tortillas squished together, dumping the purée onto the plate in unseemly dollops. 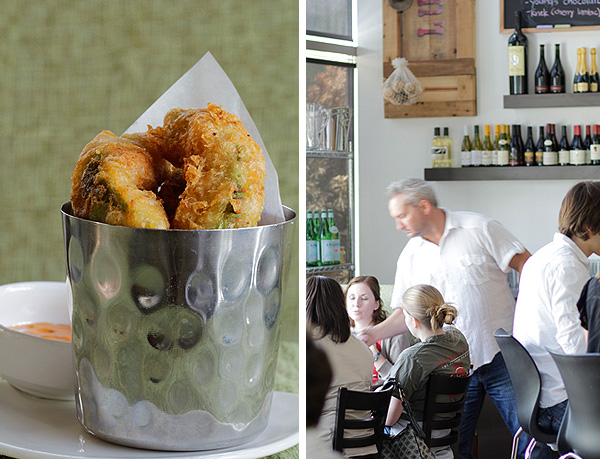 With burgers come sides. Skinny Fries were just shy of matchstick, so skinny that all you got was “fried” without much sense you were eating a potato. If you want more spud, Disco Fries were fatter rectangles artlessly topped with a cheese sauce. The portion was so big that three people sharing couldn’t make a dent. Onion rings were big and brawny, in a pale, peppery crust that seemed underdone. Fried avocado was a novelty, too rich to enjoy more than a single wedge. Sweet potato tots, the signature side, had a cute thimble shape that looked tater totty, but the resemblance stopped there. Soft nuggets pocked with random sesame seeds, they were barely crisp. Fine if you like sweet potatoes, but not if you crave the tater-tot shaggy crust and texture.

A few entrées and small plates seemed designed to fulfill a more traditional dining experience. Some of the small plates, like the cornmeal-dusted fried oysters and the tempura-fried sweetbreads, were fun for snacking, but the large plates, available at dinner only, were a bust. One night’s seared scallops were served with four scallops on a plate, barely a garnish; that was it. Lamb chop lollipops were similarly take-it-or-leave-it: three ribs, cooked medium rare, without even the energy expended to clean the bone where you pick it up. That’s some lollipop. A lobster roll nightly special felt thrown together and not true to form. It came in the de rigueur hot dog bun, but the lobster salad filling was weighed down with dross: celery, onion, and brackish spices that overwhelmed the lobster’s delicate flavor.

Some of The Commissary’s nicest assets it inherited from its previous tenant, Dali Wine Bar. That includes an A-plus location with a dynamite patio facing downtown. There’s also good karma left over from the wine program that Dali established. The place remains a popular haunt for food and beverage professionals, and it’s one of the few places that offers wine on tap from Texas-based Duchman Family wines.

When the restaurant opened, Tesar oversaw the kitchen and the front of the house, and service was a disaster, with overwhelmed staffers, frustrated customers, and long waits. They’ve since added more management up front, and service has improved.

Tesar initially offered a nightly chef’s table where he could be Chef Tesar. A restaurant within a restaurant, it was open only Thursday,
Friday, and Saturday nights. That concept had to be rethought, too. Tesar closed it in July, and planned to reopen the end of September. In the interim, he’s been doing a Sunday lobster bake—very Southampton Beach. You get the distinct impression he doesn’t want the pressure. For now, burgers will do.
For more information about The Commissary, visit our restaurant guide.