In a profession loaded with bad boys, chef John Tesar stands out. Mercurial, dismissive, he’s a hyperactive hothead with a self-destructive streak so legendary that his old pal Anthony Bourdain has written about it. Tesar is so good at embodying the tantrum-throwing temperamental-chef stereotype that D Magazine made him the subject of the September cover story, titled “The Most Hated Chef in Dallas.”

But there is the man, and then there is what he puts on the plate. From his early days at a French restaurant called Pierre’s in Westhampton to his stint at RM Seafood in Las Vegas, he has impressed discriminating palates, including the folks who hired him in 2006 to be executive chef at the Rosewood Mansion on Turtle Creek, where he took on the intimidating task of replacing longtime fixture Dean Fearing.

Tesar left The Mansion in 2009, and now his canvas is The Commissary, the casual-chic burger spot in Dallas’ One Arts Plaza. Flipping burgers might seem a step down from the five-star world, but burgers have become a culinary darling, putting Tesar right in the thick of it and also, not incidentally, giving him a breather from the top chef fast track.

It being run by Tesar, The Commissary is no ordinary burger joint. One of five restaurants located in the swanky downtown district, it has a respectable wine program overseen by Scott Barber, a former Mansion sommelier. Burgers dominate the menu, but they’re ultra gourmet, with an imaginative spectrum of ingredients and flavors. The attention to detail is nearly haute cuisine.

The first distinction is Tesar’s unusual cooking method. First he steams the patties in a CVap machine, a favorite toy of high-profile chefs such as Jean-Georges Vongerichten and Wylie Dufresne. The CVap cooks the meat to a medium-rare 140 degrees, yet keeps it moist and red. When it’s time to serve, the burger is seared on a 450-degree griddle that imparts a perfect salty, blackened crust. His hamburgers look like steaks.

The Commissary’s second distinction is the variety of burgers it serves, a dozen variations. The menu doesn’t go off the rails with gimmicky burgers. The approach is chef driven, refined.

You gotta have a classic bacon cheeseburger. Here, it’s the Magic Burger, a wink to Tesar’s first job at a Southampton Beach joint called Magic’s Pub. He uses aged cheddar and apple wood-smoked bacon, crisp but with a residual chew. The twist is the choice of bun: an English muffin lightly toasted and sufficiently sturdy to hold it all together. 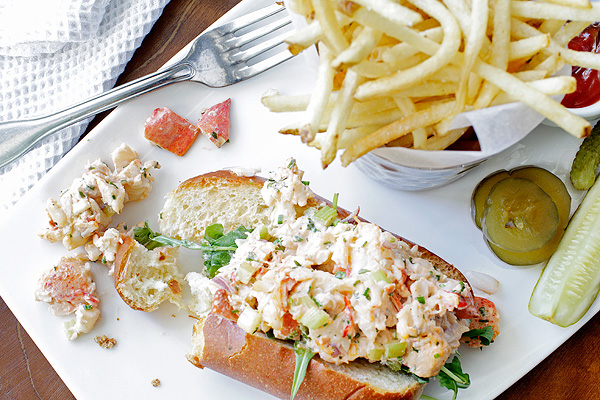 Lobster roll, fried avocado, and interior photography by Kevin Marple
photography by Kevin Marple
We should feel hometown pride for the Dallas Burger, a fine, spicy version with lush poblano peppers roasted until mellow, house-made barbecue sauce, and pepper Jack cheese. It comes on the default bun, a neutral dome with sesame seeds made by Empire Baking Company. For a spicier burger still, The Big Tex has salsa, pickled jalapeños, an ancho chile rub, and chipotle mayonnaise.

It is decreed that all chef-driven burger places must have one with an egg on it. At The Commissary, it’s called The Farmer, served with a duck egg sunny side up, the yolk on the verge of firm, so it didn’t drip all over. Thin slices of speck brought to mind ham and eggs. Served on a glossy brioche bun with melted Vermont cheddar, The Farmer was almost too decadent.

There are burgers with lamb in a pita pocket, with crab, and, for the hard-core foodies, a Tail End that throws it all in: pork and pig’s tail, topped with pork belly, green tomato chutney, and jalapeño mayo. Surprisingly, there is no turkey burger. Way to avoid the pack.