This is the story of the dress that was beautiful but never looked beautiful on you. The boyfriend who met your every criteria but whom you didn’t love. It’s the story of the thing that was almost right and how lovely that can be, even though it’s not right—or at least not for you. The particulars always matter so I’ll tell you that the Katy Trail Ice House is redolent of the long, lazy days of college or grad school, of the effortlessness of the midsummer, midafternoon beer. Outdoor wooden tables are misted. People run by on the hike and bike trail. The sheer number of people exercising, even in the heat, is joyous to watch, the way Gene Kelly is joyous to watch, his every movement so vibrantly alive that you want to sing in your own ordinary kitchen.

The Katy Trail Ice House comes from the folks behind Bandito’s and the Barley House. It has good food and a good staff that brings large, frosted schoon­ers of beer to you promptly. In fact, on each of my visits, the staff was terrific—so helpful, nonintrusive. The Texas music playing on the sound system felt Gruene Hall good. Many Texas beers are available, including Live Oak Liberation Ale, which made my husband happy. He finds it so rarely. He loves it so much. The guacamole was good; the salsa was fresh. The burgers delicious.

It is a Texas ice house with everything a Texas girl could ask for. The food, the decor, the beer, the layout of the tables—it just felt like Austin to me, felt like summer near Town Lake (now Lady Bird Lake) to me. And indeed the bar bills itself as an Austin-style beer garden and restaurant.

But the Katy Trail Ice House isn’t weird. At all. And “Keep Austin weird” is that town’s slogan. You can sit in an upscale bar on Austin’s West Sixth Street on a Saturday night, and the person at the table next to yours might be a senior high-tech PR exec who’s not so secretly also a trapeze artist. Your waiter could be a former roller derby queen. And when you leave, there’s a chance you’ll run into Leslie, the half-dressed, beloved, mostly homeless transvestite who regularly runs for mayor. That’s how Austin rolls.

Uptown isn’t weird. It’s crisply pressed. I saw expensive clothes and handbags. Even scruffy folks, in their ball caps or flip-flops, looked well-maintained and dressed attractively in the way mainstream culture defines attractiveness. I saw lots of the traditional Dallas look (blond, put together, would do great in liquor sales). Which is perfect for Uptown. But in a bar that was otherwise so Austin-y, the lack of derby queens felt, well, weird. 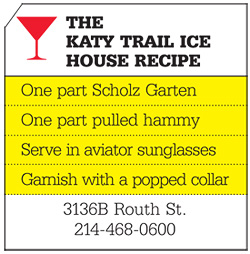 I am obviously alone in my disconcertion of the lack of weirdness. This summer, TABC reports that it sells more beer and liquor than almost any other bar in the state. And D Magazine, in its annual “Best of Big D” issue, just gave the joint its Best Bar Patio award.

Lots of things in life can be wonderful but not right for you at the same time—and it’s only rarely a heartbreak. Most times, there’s just a quiet moment of thinking, “This isn’t right for me,” and moving on, knowing that the world is full of widely different people and that what doesn’t work for you will be perfect for someone else. Every jar has a lid, every hat has a head, and every cliche has an apropos situation. That’s something to celebrate with trombones, and Cyd Charisse dance numbers. Because when I scratch my personal Austin itch at Lee Harvey’s, that leaves an open seat for someone else at the Katy Trail Ice House. And somewhere in Austin my beautiful dress that never really fit me now clings to the body of a friend like skin. Because somewhere out in the wide world, I feel sure a good woman loves a man I didn’t with such ferocity that he sings every night in the kitchen.