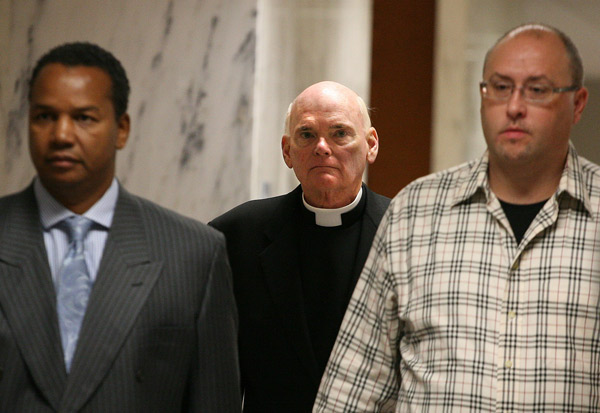 Father Swann leaves the courtroom after the verdict against ESD was announced. photo by Christina Barany
photo by Christina Barany
The gross negligence finding stemmed from the way that the school handled the expulsion of Emily Northup, not from her 2009 relationship with teacher J. Nathan Campbell. ESD will reevaluate its expulsion policy to “make sure it’s a thoughtful process,” Eagle said. The school is going to set up a committee to look at best practices from other private schools in regards to expulsion.

Eagle said ESD, which has a reported operating budget of $38.8 million, “doesn’t have very much cash.” When plaintiffs attorney Charla Aldous cross-examined Eagle, she presented a recent financial record showing the school had $11 million in cash. Eagle said those were tuition payments and could only be used “for educating students.”

In an important ruling, the jury found that while ESD is a charity, it’s not protected by the Texas Charitable and Immunity and Liability Act, which caps damages at $500,000. The school’s 501(c)(3) status has been questioned since June, when the case was sent to federal court for consideration. It was eventually remanded back to the county courtroom of Judge D’Metria Benson, who declined to rule on the matter and instead deferred to the jury.

The jury awarded the most damages for Emily’s “loss of enjoyment of life” in the future, making that worth $1 million. The verdict capped a few weeks of surprises in the trial. On Sept. 8, a man, who will be referred to as Bill Black to protect his daughter’s identify, offered never-before-heard testimony that Swann threatened to kick his daughter out of ESD after she came forward about being sexually harassed by her math teacher in the fall of 1993.

During a heated exchange with Swann, Black said his wife called the priest “a sanctimonious son of bitch,” and suggested she would tell the board and parents about the incident. At which point, Black said, Swann asked the couple if they were threatening him. “You bet your sweet ass we are,” Black recalled saying at the time. The Blacks eventually made a deal with Swann, where they agreed to keep quiet about the harassment and he agreed to let their daughter stay at ESD.

Swann was all set to testify the same day (and arrived decked out in full priestly garb), but before he could take the stand, Judge Benson declared the court in recess for three days so that “new evidence” could be investigated. It appeared that another surprise witness would take the stand, but when court resumed the next week, Swann was the final rebuttal witness for the plaintiffs. The only sign of new evidence was a filing by the defense that said they hadn’t tampered with an alleged witness, a current ESD teacher who had allegedly contacted the plaintiffs and offered to testify. The teacher’s name and purpose for testifying has never been revealed.

When Swann took the stand for the third time during this trial, on Sept. 13, he described an altogether different set of circumstances than had Black. The complaint, Swann said, was an allegation of staring, not physical contact or inappropriate comments. And the idea that the girl should leave ESD came from her parents, not Swann. He also disagreed with the timing of the complaint, saying it was in the spring of 1993, not the fall.

Family attorney Aldous produced Swann’s handwritten notes from the meeting, which included “administration wants problem to go away,” “won’t go away,” and “how can I risk bankrupting ESD.” Swann said he was quoting Black in all of those statements. During closing arguments, Aldous hammered home the idea that ESD needed to learn a lesson. “This is your charge, ladies of the jury: to decide if ESD will be allowed to treat children like this in the future.”

ESD attorney Chrysta Castaneda argued that the school made the right decision in removing Emily, calling it “the hard choice that was the right choice.”

For many more details of the trial, and further updates, visit prestonhollowpeople.com.