The first time I came across Clayton Kershaw was my junior year in high school at the 2006 Scot Classic, an annual tournament of North Texas high schools hosted by Highland Park High School every year right before district starts. Let’s just say his legend preceded him. It didn’t take long before my teammates and I became witnesses to the folklore in action.

I played for Keller High, and we had always done well in that tournament, so we assumed we would match up against the host team in the championship. We arrived early at the field, where we were supposed to face Highland Park early because we were the second game of their double header (the tournament was a double-elimination round robin). Kershaw was pitching. It shocked us that they would use him before playing us because we figured to be one of the favorites. We soon came to find out that we were lucky they pitched him when they did. Kershaw proceeded to strike out 17 of the 21 batters he faced, pitching a no-hit shutout with startling perfection. He threw 95 mph with stunning accuracy for a high-schooler and had a devastating curveball. Adjectives flooded our minds and poured out of our mouths. Amazing. Scary. Special. Phenomenal. He was a prodigy. Like Mozart at a piano, Kershaw was orchestrating a masterpiece with every snapping curveball and buzzing fastball, and he was doing it with such natural ease that you couldn’t help but gasp.

The year before, I had faced Craig Italiano, a Flower Mound High kid who wound up a second-round draft pick by the Oakland A’s. Italiano threw 100 mph and had a frame like Kershaw’s, but he had no idea where the ball was going. When he tried to throw an off-speed pitch, his curveball would nosedive 3 feet in front of the plate. Watching Kershaw was like watching Cliff Lee pitch against a bunch of high school kids.

After winning his first game that day, Kershaw played first base against us, hitting cleanup. He didn’t look nearly as graceful in the batter’s box as he did on the mound. Nonetheless, he hit an opposite field home run in his first at bat in the top of the first inning. I watched him slink around the bases like a kid who had just grown 8 inches overnight and was wearing clown shoes. It was obvious his future was as a pitcher, but he still was the closest thing to Roy Hobbs I had seen up to that point in my life. I felt the same way I did when I first saw my favorite player, Andruw Jones, play in person. I just held my breath, tried not to blink, and felt my heart race. It’s a special feeling to witness greatness, and I was seeing it in its early stages—a remarkable sight only a very few lucky people can claim.

I hit leadoff that day. I told myself before I entered the box that if I got on base at any point in the game, I’d make a point to talk to him. Most ballplayers don’t have a problem with talking to the opposing team’s first baseman, but I never did it. For one, while I played, even if I was friends with some of the guys on the other team, they were my opponents. To me, that meant they were the enemy. Second, the biggest part of my game was base running. I could steal bases with the best of them, outrun most, and took an extra base at every opportunity. Small talk doesn’t make base running any easier. I played against some pretty good ballplayers: Austin Jackson (finished second in AL rookie of the year voting in 2010), Jordan Walden (2011 All-Star), Blake Beavan (2007 first-round pick), Zach Britton and James Russell (both with good innings at the major-league level), and many more great players who are either in the minors or at Division I college programs. I never talked to any of them during the game.

But I just had to talk to Kershaw. There was no doubt in my mind that he would one day be an All-Star in the majors. Kershaw was better than anyone I’d played against by a Secretariat margin. He literally was a man among boys.

Luckily I reached base in my first at bat. This is how the following conversation went:

Me: “Nice hit.” [referring to his home run earlier]

Kershaw: [grinning goofily like only a left-handed pitcher can] “Thanks. I got lucky.”

Me: “Yeah, I noticed your eyes were closed.” [They weren’t.]

Me: [thanking God he wasn’t] “Wouldn’t matter. I’d pull a hammy during warm-ups if you were.”

Kershaw: [laughing] “So where’re you goin’ to school?” [meaning college]

Me: “A couple of my teammates are going to play at TCU. So hopefully there. No offers yet. How about you? Are you going to school, or are you going to take the money?” 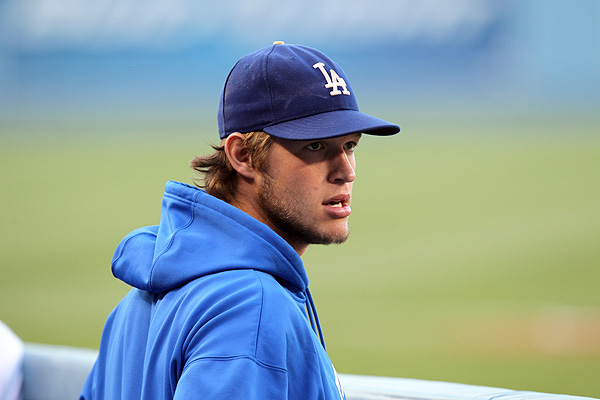 Kershaw is the Dodgers’ first Triple Crown winner since Sandy Koufax. photography courtesy of Corbis
At which point, one of my teammates got a base hit, and the conversation ended. I admired the teenage phenomenon for how nice and humble he was, and I’ve followed his career closely ever since. He ended up taking the money. The Dodgers took him seventh overall in the first round of the 2006 draft. I remember seeing his first YouTube video as a big leaguer. Kershaw was 19 and in his second spring training with the Dodgers. Hall of Famer Vin Scully was calling the game. Up to the plate came Sean Casey, a 10-year vet playing for the Boston Red Sox. Kershaw had the count at two strikes when he looped in a curveball that started off behind the batter and ended up square in the strike zone, jelly-legging Casey, who could do nothing but watch. Scully, who’d been broadcasting for 59 years, at first couldn’t seem to find the words to describe what he’d just seen. He grunted in disbelief. Then he offered: “Holy mackerel. He just broke off Public Enemy No. 1.”

I remember calling all my friends when he was coming out of the bullpen in the playoffs that following year as a 20-year-old. He put up great numbers for a rookie in his first full season as a starter. The following year, he was snubbed by Joe Torre, who didn’t give him the opening day start. But now comes his first season in which he deserves a Cy Young, the award given by a vote of the Baseball Writers Association of America to the best pitchers in baseball, one each in the American and National leagues.

This is a great year for the top National League pitchers. There are several pitchers who in any other year would deserve the Cy Young.
But this is Kershaw’s year. He led the National League in wins (21, tied), earned run average (2.28), strikeouts (248), innings (233.1), and walks and hits per innings pitched (0.98, tied). Basically, he has dominated his league.

But his best display of dominance would be against the cream of the cream. Kershaw is 4-0 against the two-time Cy Young award winner Tim Lincecum of the defending World Champion San Francisco Giants. In his games against Lincecum, Kershaw gave up 1 earned run in 30 1/3 innings, with 36 strikeouts. That is Sandy Koufax-like. In fact, Kershaw is the first Triple Crown winner (leading his league in strikeouts, wins, and ERA) since Jake Peavy in 2007, and he’s the first Dodger to do it since—you got it—Koufax in 1966.

Some may argue that Kershaw doesn’t deserve the Cy Young (let alone the MVP, which I could also make a case for) because his team didn’t compete for a playoff spot. But the last three seasons have proven that argument no longer holds water. Tim Lincecum (2008), Zack Greinke (2009), and Felix Hernandez (2010) all won Cy Young awards on teams that finished under .500. And, unlike Kershaw, none of them won the pitcher’s Triple Crown.

In the background of Kershaw’s fantastic season, the Dodgers franchise has been a mess. Owner Frank McCourt is going through an ugly divorce. With his wife owning half the team, the franchise has been caught in the middle. Major League Baseball had to step in when McCourt could not meet payroll and has pressured the sale of the team. McCourt and Commissioner Bud Selig have been at odds because Selig did not approve a potentially lucrative television deal that might have kept the team profitable and under McCourt’s control. Despite all this drama, despite the team’s subpar season, Kershaw has answered the bell every fifth day and won 21 games.

With the Dodgers in financial flux and Kershaw another year closer to arbitration, it’s tantalizing to look toward the future and the possibility of his being traded or signing with another team as a free agent when he becomes eligible. Hopefully the Rangers will contend for his services and bring Kershaw back to Texas. For now, though, we will have to admire from afar.

The nation is just learning his name, but all baseball fans in North Texas should be proud that one of our own is now one of the best. If you haven’t had a chance to see him, make sure you watch opening day for the Dodgers next season. Trust me, the adjectives will flow.

Nick Miller played baseball at El Paso Community College, where he studied journalism. When he gave up his baseball career, he transferred to the University of North Texas, where he is now studying engineering. Find him at theoracleofsports.blogspot.com.