It’s a bright, crisp autumn afternoon at the popular Bishop Arts restaurant Oddfellows, and Tom Vincent is encouraging his students
to breathe deeply.

“Come on,” he demands. “Really put your nose down into it.” A chorus of sniffs rises up from the crowd of 20. Some look pleased, others befuddled. “Mmmmm—that’s nice,” Vincent coos. “So, did you smell anything? Anything at all? Just say the first thing that comes to your mind and don’t worry about being wrong. There are no wrong answers here.”

A tentative hand creeps into the air. “Baker’s chocolate?” asks a timid woman. Yes, Vincent assures her. He tastes that as well.

Suddenly, words like caramel, tobacco, and black currant bounce around the room as Vincent’s new acolytes buzz with confidence, furiously scribbling notes and whispering comments to one another.

“Fish oil!” yelps one excited man. That one draws a chuckle from the crowd, almost testing Vincent’s philosophy that there are no wrong answers. “Okay, that’s a new one,” he says. “But let’s explore that. Why fish oil?”

If the preceding scene seems a bit silly—really? fish oil?—you’re not alone. Most people put little thought into their morning cup of coffee. It’s a fuel source. A habit. They certainly don’t sit during their morning commute, sipping and smelling their drip for notes of lemon zest and bright fruit. On a global scale, more than 2.25 billion cups of coffee are consumed in the world each day, making coffee one of the most valuable commodities in the world, second only to oil. So, yes, coffee is popular. For many, it’s a necessity, their morning life blood. But still, it’s just coffee, right? Ground beans. Hot water. That’s it. How complicated can it be?

“Oh, you’d be surprised,” says Vincent, self-confessed coffee nerd and owner of Texas Coffee School, the Arlington-based training facility for future baristas and coffeehouse owners as well as home enthusiasts who want to learn how to make a proper handcrafted coffee. He’s part of a new breed of fanatics that is evolving the coffee culture in Dallas. These people want the city to change the way it looks at its daily fix, transforming it from ubiquitous caffeinated beverage to affordable luxury.

“It’s a lot like the local food movement,” Vincent explains over—what else?—a cup of coffee during his afternoon Oddfellows cupping session. Much like a wine tasting, cupping is a technique used to evaluate a coffee’s aroma and flavor profile. Vincent hosts regular cuppings at the Oak Cliff restaurant, where he helped set up its ambitious coffee service. “Trends tend to get to Dallas slowly,” he explains. “People here now care about where their food comes from, how it’s prepared, how it got here. They want the best. Want to savor it.” Vincent and others are betting that the same is true with coffee.

In places like Portland, Oregon, and Austin, this conversation would seem behind the times. In those cities, the coffeehouse culture thrives: an appealing blend of community, innovation, and carefully crafted brews. And, yes, Dallas has always had its fair share of competent coffeehouses. But over the past two to three years, local coffee geeks have seen a shift in the status quo. “Say, 13 to 14 years ago, Texas was the weakest market compared to the rest of the nation,” says Mike McKim of Cuvée Coffee in Austin, one of the leading roasters in the country. “Austin really started booming four years ago. Now Dallas is ready to explode. Anyone you talk to in the specialty coffee industry thinks that this is the next big market.”

“It’s a unique time to be in Dallas,” says Jonathan Meadows, owner of Cultivar Coffee & Tea Co., a coffee roaster and shop in East Dallas. “If you’re a coffee lover, never has there been a better time to be alive. We understand it better now. It tastes better now.” Meadows is one of Dallas’ new generation of coffee roasters that eschews the old Dallas roasting philosophy for a new one in which the bean’s needs win out over the desire of the roaster.

“By and large, Dallas’ concept of bean roasting has been for roasters to force their will on the coffee,” Meadows says. “If you liked a charred dark roast—and many local roasters do—then that’s what you’d do with the bean, regardless of what was best for the bean.” But Meadows has a slightly more ideological take on roasting. Look at the bean, the region, the varietal. Roast it. Taste it. Is it too light? Too dark? “Let the bean talk and tell you what it needs,” he explains. “Sure, it’s a romantic idea. I like it. But it also just makes the coffee taste better.”

Oak Cliff Coffee Roasters’ Shannon Neffendorf agrees. After working in Milan and embracing its espresso culture, he started his company out of equal parts passion and frustration. He simply couldn’t find suitable coffee in Dallas. Now his goal is to change the city one bean at a time. “The bean tells me when and how to roast it,” he says. “The flavor is already there. I just try to stay true to the essence of the coffee.” 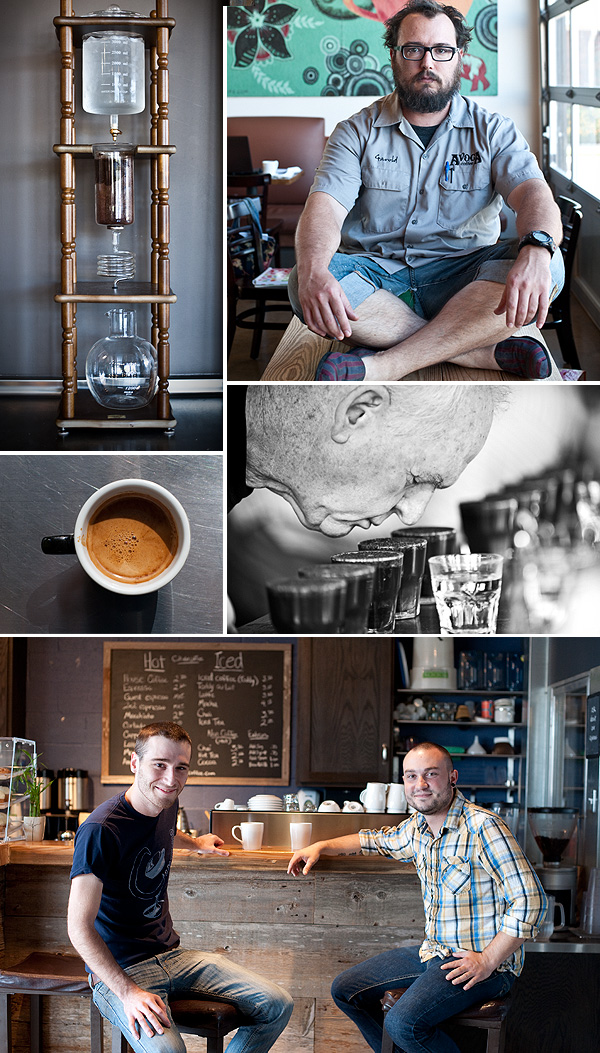 (clockwise from top left) Japanese cold drip brew apparatus at Avoca Coffee; Avoca Coffee roaster Garold LaRue; Jim Clayton participates in a coffee cupping at Oddfellows; Cultivar owners Nathan Shelton and Jonathan Meadows; a Mercantile Coffeehouse espresso. photography by Elizabeth Lavin
photography by Elizabeth Lavin
“That’s it. Slurp as loud as you can,” Vincent encourages the Oddfellows crowd. “Don’t worry. It’s not rude. I promise.” As with wine, you want to aerate the coffee and hit all areas of the palate, he explains.

Matt Spillers has arrived at the cupping and takes it all in with a smile. One of Oddfellows’ co-owners, Spillers was insistent that his restaurant have one of the city’s best coffee services. “At first, it was more for Oak Cliff,” he says. “We needed great coffee over here. But really Dallas itself needed it. So we decided to do it right.” That meant working with Vincent and Cuvée’s Mike McKim. At Oddfellows, a cup of coffee is prepared using a pour-over drip method—hot water slowly and steadily poured over coarsely ground coffee—rather than the standard automatic drip employed by most restaurants and coffeehouses. Espresso drinks are made using a La Marzocco Strada machine, one of only four such espresso machines used in the country. It allows Oddfellows’ specially trained baristas greater control over the quality of the shot. The restaurant also uses Cuvée Coffee as well as guest beans from other lauded roasters.

Other new coffeehouses employ similar techniques. Downtown Dallas’ Mercantile Coffeehouse brews each cup by hand using a pour-over method and beans from Chicago-based Intelligentsia, one of the country’s finest. Fort Worth’s Avoca Coffee roasts its own beans and uses a press pot to brew its coffee. Cultivar offers its 2×2, a side-by-side flight of house and guest espressos.

If this all sounds like it takes a bit longer than your standard to-go drip, well, yeah, it does. But this new breed of coffee pioneers is betting that fickle Dallas customers will come to see and savor the difference. “Look, this has been a game of patience,” Spillers says. “We want to produce the highest-quality cup of coffee possible yet still keep it affordable, efficient, and timely.” Sure, it would be faster to just hit a brew button. But Spillers contends that a great cup of coffee demands a certain level of finesse and skill. “It’s like the fast food syndrome,” he says. “Once you start eating fresh, locally grown food, you can’t go back to the stuff you ate before. We’re betting that Dallas will discover the same thing with a handcrafted cup of coffee.”

This Thanksgiving staple makes Vincent’s face light up. He takes another sniff, sips, and nods in agreement. “You’re so right,” he says to a woman in his cupping class. Later, he confesses that he gets excited when he hears a description he hasn’t heard before. “I can have, like, 500 words on my page when I’m tasting a coffee,” he says. “But when someone tosses me a curve like ‘candied yams,’ it blows me away. It shows that people can get it when they’re exposed to it. That Dallas is ready to take its time with a great cup of coffee.”

Perhaps they won’t uncover notes of candied orange peel or notice the coffee’s syrupy mouthfeel. But they’ll still notice a difference. Vincent describes it as the “aha!” moment.The consumer takes that sip and thinks to himself, “This—this is what coffee should taste like.” Vincent says, “I see it on the face of at least one student in every class.”