In March 2010, I read a story in the New York Times about Kamal Mouzawak, a Lebanese chef and restaurant owner. The Times piece dubbed Mouzawak “the Alice Waters of the Middle East” for his dedication to bringing together people from different religions and cultural backgrounds by creating a farmers market in Beirut. He is a farm-to-market visionary.

I told my friend Chad Houser about the story, because I knew he and Mouzawak shared the same belief in the powerful bond that can be created by cooking and sharing food. His mother grew up on a farm in East Texas and spent her summers selling produce at the Dallas Farmers Market, and his family had a tradition of big Sunday suppers built around the bounty from their garden. Houser brought that spirit to Parigi, the restaurant where he is co-chef and co-partner. He is also president of the Dallas Farmers Market Friends and one of the founders of Cafe Momentum, a nonprofit restaurant that serves as a culinary training facility for at-risk youth. So I knew Houser would appreciate Mouzawak’s story.

“His dedication is the same as mine,” Houser said. “By creating a market, he has established a place where Sunnis, Shiites, Christians, and Jews are buying and selling food, the one thing they have in common, together in one place.”

It took only one email to reach Mouzawak. He not only offered to host us, he also asked Houser to cook a Texas-inspired meal in his restaurant, Tawlet. Because that’s what Mouzawak does: asks people to cook. He started the small restaurant two years ago. The concept is inspirational. Each day, he invites women from different villages to come and cook versions of what they serve their families. It gives these remote housewives a place to showcase their talents and get paid for it, too. Because of Mouzawak’s curatorial approach to the restaurant business, Tawlet has been credited with defining the regional cuisines of Lebanon.

We decided to take Mouzawak up on his offer. Houser packed a suitcase with corn grits and cornmeal from Homestead Gristmill outside of Waco. “I know I won’t be able to find it there,” Houser said. “I can’t cook the food I grew up on without them.” He also took gifts of Texas olive oil and a bottle of Becker Vineyards’ Viognier.

Before we left, Houser hosted a brainstorming session with friends and chefs at his house. He wasn’t sure what kind of ingredients he would be able to source for his debut at Tawlet.

“I’m leaving with a file with recipes for about 30 dishes,” Houser said. “But I’m going with an open mind, because I have to wait and see what I find.”

Beirut is sandwiched between the Mediterranean Sea and the Lebanon Mountains. In the same view you can see sand and palm trees and, in the distance, snow-capped mountains. The city is full of pale white high-rise buildings with balconies covered with lines of laundry hanging out to dry. The sounds of the city are deafening. Some streets smell like urine, and the breeze off the sea carries the not-so-faint stench of dead fish. Then suddenly you turn a corner and the street reminds you of New Orleans or Paris or Southern Italy: pink and green buildings, gables on the balcony, cafes, Vespas weaving through the cars. No matter where you go, the sight of policemen wearing battle fatigues and police stations surrounded by piles of sandbags is unnerving.

It’s April, and we are sitting in Mouzawak’s swanky apartment in a quiet neighborhood of Beirut. We can hear the distant sounds of jackhammers, of honking cars. When Mouzawak rented it 12 years ago, the building was in ruins and only blocks away from the notorious “green line,” a swath of the city that divided Beirut during the civil war. “Green” because it had been a no man’s land for so long that nature had taken over and created a leafy forest, a convenient cover for warring snipers. When he moved in, the block was full of empty buildings; he says he woke up one day and found himself living in a party zone.

Mouzawak’s apartment in Beirut is beautiful—arched windows overlooking palm trees, 20-foot ceilings, and an eclectic mix of Bauhaus furniture. He is warm, gentle, and shoeless. He sits reclined on his sofa surrounded by two assistants with laptops as he discusses our schedule. Tomorrow, we will visit Souk el Tayeb, the market Mouzawak created in the center of town. The day after, Houser will prepare a lunch at Mouzawak’s house in the country about an hour north of Beirut. For the next week, we will visit farms, artisanal food producers, wineries, and restaurants. We are stunned, jet-lagged, excited, and starving. 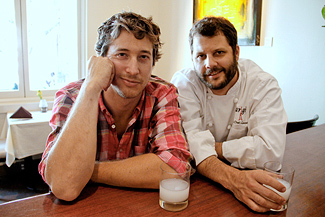 The author and Houser. photography by Gerardo Lopez
photography by Gerardo Lopez
We take the 20-minute walk through the city to Boubouffe, a kitschy, homey bistro Mouzawak has recommended. As we walk, we swerve to avoid speeding scooters and pass many of the new bars popping up in the city. Suddenly we spy the waving arms of a passenger in a car. The man yells, “Yalla! Kifak! Bon jour! Come with us, we are going to Boubouffe! Come, you must come!” It is Mouzawak, his friend Rania, and her two kids. We begin eating around 10 pm.

Mouzawak orders a spread—thin Lebanese pita, baba ghanoush, tabbouleh, chicken shawarma, lamb shawarma, and hummus. The chicken shawarma is wrapped in pita and stuffed with several French fries, a yogurt sauce, and enough garlic to kill a dozen vampires. It is a revelation. Gyros in Dallas are a nice greasy snack sometimes; chicken shawarma in Lebanon, which from a distance look like just another gyro, is an experience. Everything at Boubouffe is amazing. It feels like before this we’d eaten Lebanese food in black and white and here it is live, in Technicolor. Nothing on the menu is new, and yet nothing tastes quite like anything we’ve ever eaten before.

In the morning, we drink Lebanese coffee in small espresso cups, and then we’re off to the Souk el Tayeb market located in Saifi Village, a stylish and renovated area in downtown Beirut. By 9 am it is bustling. We stand on a platform in the center of the market, a former parking lot. There are plans for a mall to go up next door. Across the way is a mosque, beautiful and sparse. Another building straddling the northeast corner is only a shell from the war, but cranes are there, ready to assist the rebirth. Down the street, Hermès is already up and running. Luxury and destruction, tossed together. You can feel the momentum.

Souk el Tayeb translates into “the market of good.” “What does it mean, ‘the market of good’? First, it means good people,” Mouzawak says. “We are finding people in Lebanon who love what they do. They cook, they make jewelry, or they grow food on a farm. So we bring them together in the market and use their produce at Tawlet. Somewhere in all of this, we hope that it will make a difference in our lives.”

I ask Mouzawak if he is trying to change history with his market. “I am only focusing on what is good,” Mouzawak says. “If we bring it together today, hopefully we can keep it together tomorrow.”

The market is full of product. There is organic dairy, honey, and vegetables; marzipan shaped into roses or, because Easter approaches, into chicks and eggs; halloumi, a cheese that is sliced and then grilled; and a drink called jallab, which Mouzawak tells us is grape molasses, in this case with a touch of rose water. Like the organizers have done at the Dallas Farmers Market, Mouzawak has divided his market into specific areas: local and organic; local; mix of some local and foreign. “Farmers and consumers are now becoming interested in quality control and buying local,” Mouzawak says.

A woman sits on the ground rolling out dough with her hands into a small circle on a wooden board. She slowly stretches it on her arms like you might (gently) stretch a pizza and drops it on a convex grill beside her. As small bubbles appear, she takes a spatula and rubs oil and za’atar across the dough. She starts the process again. And again. The way it has been done for thousands of years.