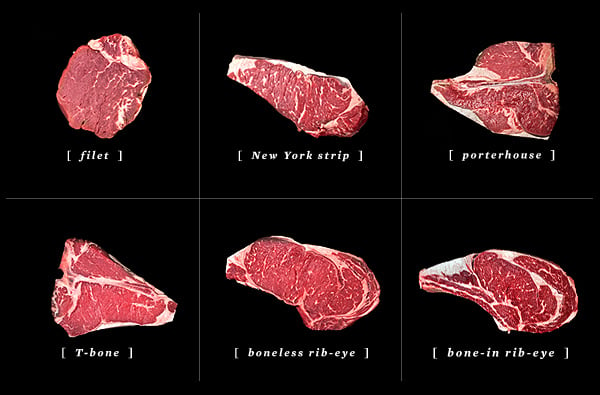 photography by Elizabeth Lavin
photography by Elizabeth Lavin
Filet
The delicate and lean filet is probably the most popular steak. It is usually cut in 8- or 10-ounce portions and is considered a “lady’s choice.” The cut comes from the tenderloin, the most tender muscle of the animal, which runs along the spine of a steer. Smaller portions cut at the end are called mignon, or “small” in French. A filet has a buttery tenderness that some steak lovers consider too soft.

Bone-in filet
Be prepared to pay for this one. Only two bone-in filets can be cut from each steer. The bone lends a rich, subtly sweet marrow flavor to the lean meat.

Long-bone filet
A filet with a long—sometimes 8-inch—bone that is nothing more than a showy gimmick. The taste is the same as the bone-in filet, but the price can be double.

New York vs. Kansas City strip
The beef industry can’t seem to agree on this one, so I’ll go with the prevailing opinion. A New York strip is boneless, and the Kansas City has a bone. Both are cut from the larger end of the loin. The meat comes from the strip and is not as flavorful as a rib-eye or as tender as a tenderloin. However, some people prefer the chew of a strip and the flavor of the sizeable rim of fat on the side.

Porterhouse
This cut is basically a bone-in strip with a generous piece of the tenderloin, or filet, attached. The porterhouse, cut from the short loin nearest the sirloin, is usually served as a large steak and can go as thick as 3 inches. It’s fine grained and flavorful.

T-bone
You don’t find too many T-bones in upscale steakhouses because the cut is really just a junior porterhouse. The thick bone that runs through the center looks good on a plate, but T-bones have a much smaller portion of the filet and are usually cut thinner and broiled.

Delmonico
This leaner, boneless rib-eye gets its name from New York’s famous Delmonico’s restaurant. The signature triangular steak is trimmed from the short loin, next to the rib, and the fat cover, or “lip,” is removed, leaving only intramuscular fat. Sometimes called a New York steak.

Châteaubriand
This is really a small roast more than it is a true steak. It is cut from the center of a beef tenderloin and should be anywhere from 3 to 5 inches thick, weighing anywhere from 12 to 16 ounces. Accordingly, it ought to serve two or more.

Rib-eye
This cut is harvested from the rib section of the steer. It has deep marbling and lots of flavor. When trimmed and cooked properly, the boneless rib-eye will melt in your mouth.

Bone-in rib-eye
A rib-eye with the bone in is cut from the sixth through the 12th ribs. The internal marrow adds a robust flavor to the steak.
Cowboy rib-eye
See “bone-in rib-eye.” No difference. Just marketing.

Dry aged vs. wet aged
When meat is aged, microbes and enzymes break down the connective tissues in the muscle, making the meat more tender. Until the invention of the plastic bag 34 years ago, all meat was hung to dry age, during which process the meat sheds water weight, producing a dense, beefier flavor. Then the beef industry discovered that meat could be aged in a vacuum-sealed bag, reducing that lost water weight (and increasing profits). But the meat can’t breathe in that bag, and it ages while in contact with its own blood, which imparts an almost sour note to a steak’s flavor. Today, dry-aged beef is back in style. Many Dallas steakhouses offer it on their menus. The degree to which these restaurants actually dry age their meat in-house is a discussion for another time. I recommend that you ask a server or manager to explain the restaurant’s aging methods before you buy.

Grass-fed beef
Ecofriendly diners are turning to grass-fed beef, a movement supported by many family farmers. Generally, grass-fed steaks come from happier cows raised in rural communities where they range free without being given antibiotics or hormones. The flavor of grass-fed beef is distinctively different from dry- or wet-aged meats from corn-fed cows. I find it gamier. For many, it’s an acquired taste.