Dallas has a giant crush on Lucia. And why not? She is easy to love. This small, adventurous Italian restaurant has courage, a fierce independent streak, and some sultry handmade pasta, too.

Lucia is the offspring of Jennifer and David Uygur, who are fulfilling their dream of opening their own place. David built a dedicated following for his creative cooking at Lola, where his precisely rendered culinary experimentation made the restaurant’s limited-seating tasting room the top destination for foodies in the know. Jennifer is the slow-food enthusiast and former wine manager at the Dallas Central Market.

At Lucia, Uygur departs from New American cuisine, an act inspired by his wife’s love of Italian food. Her aunt was an opera singer, and a teenage Jennifer went to Verona to see her perform. That trip educated her palate. Uygur  had his own Italian connection. Right after he got out of culinary school, he worked for Basil’s in Austin, where they make fresh pasta every day.

Bravo that Lucia’s Italian is not of the bogus red sauce variety that has afflicted Dallas for so many years. But it’s not scrupulously authentic, either. Uygur uses Italian as his starting point, then incorporates elements that mean something to him. It becomes a form of personal expression, and that’s part of the pleasure. You are in his hands, along for the ride. Dining at Lucia, which has an ever-changing menu, takes you places.

It takes you to a plate of gnocchi, soft but with a stubborn firmness you vow to conquer. That gnocchi comes with thin slices of speck, a ham, to contribute some tang; cabbage leaves sautéed in a dry pan until they become sweet as candy; and Taleggio cheese, one of the more decadent of Italian cheeses, a happy harlot of a cheese if there ever was one, oozing richness. Each ingredient on its own seems a revelation; together, they soar. 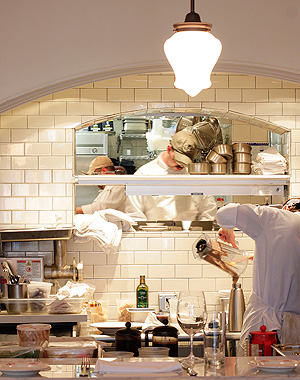 Open kitchen. photography by Kevin Marple
photography by Kevin Marple
It takes you to a pork belly, proud in its sharp and sweet bacon flavor, but slow-roasted to melt away any resistance in texture. That pork belly comes with corona beans—oh goody, a bean we hardly know—large and creamy, with a slight pop to its skin and a ruddy, earthy center. The wonderfully bitter green called broccoli di rabe juts in with its nutty sharpness to poke the placidity of this new fangled pork and beans.

Lucia hits lots of hot buttons. It’s in the hip neighborhood Bishop Arts. It chooses small over large. It elevates a cuisine that’s been mostly underappreciated in Dallas. And it is artisanal, in that the kitchen makes nearly everything from scratch, from the house bread to the pastas to the cured meats. And, like no other restaurant, Lucia feels alive. The creamy parchment walls of the cozy dining room nearly glow, drawing you in from the sidewalk and enveloping you in a warm hug. You can almost sense its heartbeat. It feels timeless, as if it has been there forever. The other patrons seem like old friends.

Jennifer, playing the role of hostess, makes you feel like you’re in the couple’s home. She has an ingenuous charm that puts diners at ease. The service echoes her informality, sometimes too much. Many of Lucia’s staffers worked with Uygur at Lola, and, like an old family, they can come off as eccentric­—doting on regulars, oblivious to the rest. As further proof of Lucia’s mom-and-pop status, there’s an unhurried approach to returning phone calls. There are quirky touches in the decor, too. The rusty tools, mezzalunas, on the walls are from the Uygurs’ collection, and the cookbooks on the shelves come from their home library. 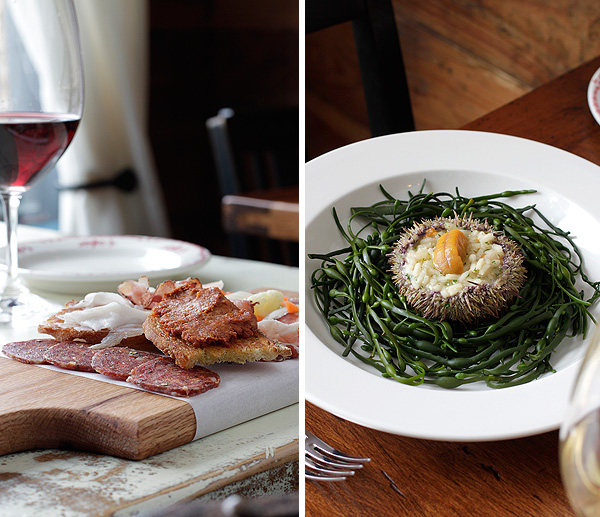 Salumi platter; Risotto with sea urchin. photography by Kevin Marple
photography by Kevin Marple
The meal starts with a dish of warm olives. Warm olives? Really? But they’re good, laced with ingredients such as orange peel or garlic; their preparation changes from time to time. And then there is the house bread, so exceptional that it instantly grabs the title of best restaurant bread in Dallas. In a brilliant stroke, Uygur  uses a spinoff of the legendary “no knead” recipe first published by the New York Times in 2006 and a food blogger’s favorite ever since. The recipe was devised by Jim Lahey, owner of Sullivan Street Bakery in New York, and represents a major achievement in the annals of bread-making for its ease of execution and stunning results—even for the most bread challenged of home bakers among us. It produces bread with a fabulously thick, chewy crust and a spongy, doughy center. Lucia’s restaurant-quality ovens give it an extra dose of tawny, crisp greatness.

Lucia’s menu is divided, Italian style, into four courses: antipasti (starter), primi (pasta), secondi (entrée), and finally dolce (dessert). In a helpful gesture, the two first courses come in half-size or small portions, enabling those with smaller appetites to sample all four.
A couple of starters have vaunted into “must get” territory, starting with the salumi misti, Uygur’s house-cured meats. He has been curing meats since before his Lola days, so it’s no surprise to find them here. Some of his items look like standard cold cuts, such as his coppa, a thinly sliced meat that resembles prosciutto. But Lucia has new tricks, too. Namely, nduja, a rust-colored sausage that’s like a super-spicy pate, spread over slices of bread, like bruschetta. Red pepper makes it hot—just hot enough to get you to stop a minute, blink tears from your eyes, then reach for more.

The other talker is the beef tongue, which Uygur sears until the outside gets dark and crusty while leaving the inside as tender as butter. It is served with salsa verde and roasted onions, like a clever spinoff of liver and onions. More than any other dish, the beef tongue embodies one of Uygur’s primary goals: to glorify ingredients others would ignore. He’ll feature beef tongue any day over the de facto petit filet mignon you’re guaranteed to find at less adventurous restaurants.

This impulse to champion the culinary underdog surfaces everywhere. Most chefs, for example, would use celery tops only to make stock. Or they would just toss them aside. But Uygur sprinkles chopped fresh celery leaves over oyster risotto as a garnish. They give the dish a pert freshness no other ingredient could.

His secondi, or main courses, tend toward thick hunks of protein, cooked slowly so that they melt in the mouth, accessorized with vegetables and grains of the season. Compared to the weird science he did at Lola, this food seems less from the brain and more from the heart. Many ingredients are sourced locally, such as the baby lettuces from Tassione Farms, tossed in a simple lemon and garlic vinaigrette. Pork from Full Quiver Farm gets used in the salumi, then encores in other ways, such as house-made sausage with lentils and parsnips and carrots.

Desserts are mostly worth your trouble. House-made gelato and sorbetto come in flavors you wouldn’t expect. The sorbetto made from butternut squash proved a pleasant surprise, but some, such as the overtly buttery brown butter gelato, can be a challenge. Little puddings with candied fruits and nuts were lovely, like bittersweet chocolate budino with salted caramel and orange cream. They’re served in sweet glass bowls that reminded Jennifer of something your grandmother might have.

Jennifer assembled the wine list with bottles from Italy, Oregon, Austria, and France. She favors wines you don’t see everywhere and that pair well with Uygur ’s food without overshadowing it. She’s deep into obscure Italians such as Poderi Luigi Einaudi Vigna Tecc, a medium-bodied red she chose for its low acidity and because it has more personality than you usually find in a Dolcetto. It’s worth seeking her out for a consult. She knows the list inside and out, which can’t always be said of her staff.

The room has only 36 seats total, if you count the four at the bar. With so few tables, you’ll have to make your weekend reservation well in advance, especially since the proclamation in January by the New York Times that Lucia is “the best new restaurant in Texas right now.” It’s so small that everyone in the dining room can see the open kitchen, like a temple with its celestial arches and gleaming white tile. Uygur and his small staff work with fixed expressions, but there’s a relaxation, too. Every so often, he’ll come out and chat with customers, something he rarely did at Lola.

This Lucia is like a tree that changes with the seasons. In the winter, she is rustic and earthy, ripe with root vegetables and muddy sauces. In the summer, she will sing of tomatoes and basil. She won’t give you the same thing every time you visit. That is why we love her.

For more information about Lucia, visit our restaurant guide.