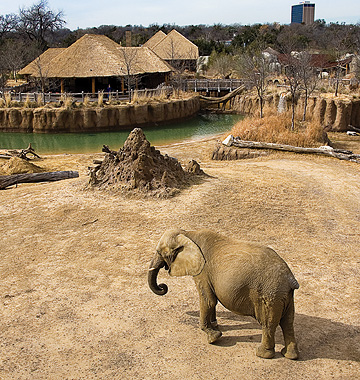 photography by Lisa Means
photography by Lisa Means
The body’s demands fascinate me. the roaring hunger after a hard swim, the luxuriant satisfaction of a full belly. The slow creep of sleepiness or cool slide of water drunk on a hot day. Twenty-five hundred years after Aristotle laid his philosophical foundations, 500 after Descartes called thinking the defining element of existence, and 50 since second-wave feminism posited theories about ways to live, the physicality of the body remains joyously fascinating and inexorable in its demands. And now, as a parent to small children, I am more fully aware of those demands than I have ever been before or likely ever will be again. This explains, at least in part, why I love to feed animals at the Dallas Zoo.

A giraffe takes a lettuce leaf from a child, its long, black tongue resembling, surprisingly, a bird’s. Giraffe tongues are different from dogs’ or cats’, those usual pink tongues lapping water. Hairs on the chin look impossibly soft, the muzzle like well-worn suede. Even the horns, those tiny horns, look like they are waiting to be rubbed. The zoo staffer reminds everyone that the giraffe is not to be touched, that you can’t brush feathery eyelashes with your fingertips.

At a tiny stand no bigger than a lifeguard’s hut, you can buy three rye crackers or three leaves of romaine lettuce for $5. The leaves are crisp and green, the rye crackers the same ones small children eat with cheese. One busy day, the giraffes stopped eating by 2 pm. So many people had fed them that they were full. Children in bright jackets still bought food and waved lettuce leaves vainly.

On other days, the giraffes are hungry and eat eagerly. It took less than one minute for my daughter to feed the giraffe all three rye crackers, for the long, black tongue to curl like a bracelet around the first cracker, for the giraffe to look for and be given the next one. At that height—us on an elevated lookout point and the giraffe in a kind of sanded gully below—the giraffe and I were eye level. My son was strapped into a pack on my back. He, too, was eye level. We all looked at each other for a moment, eye to eye, face to face.

English is largely a language of binaries. at its core it’s iambic. Syllables are broken down into stressed and unstressed, and the essential parts of a sentence are subject and predicate. It’s a language rooted in pairs. And, over the years, the more I studied in school, the more Cartesian I grew. That I could think meant I existed. As far as I was (and mostly still am) concerned, thought ordered my reality. Because I thought in a binary language (English), my reality was, in many important ways, binary. In my world, things were paired, sometimes in opposites, sometimes not: up and down, adult and child, action and actor, sunlight and day, and so on. All of which meant that in the deepest parts of my mind, those recesses where my individual truths live and underlie my actions, in that place, “animal” and “human” were a pair. Which meant that they were each distinct. Though I knew intellectually that a human is a kind of animal, I felt them as more separate than that, and, fascinating as the body and its demands were, I identified essentially as human (thinking, rational, able to observe and control the body)—not animal.

I did not really know I was also an animal until four months after my daughter was born. A tipsy man in a public place threw a Nerf football, and it hit my daughter while she was in my mother-in-law’s arms. I wasn’t angry—anger is much too familiar a feeling to explain my visceral response, the sudden muscular heat running through me. The man began walking over to apologize. I held a finger up in violent warning to keep him away.

I didn’t know myself.

Politicians and newsmen who bandy about the term “mama bear” are fools. No one should speak lightly about something so profound and raw.

When we ran out of food, the giraffe lost interest and walked away, wandering through the 11-acre Giants of the Savanna exhibit, opened in May of last year. The exhibit has an easy beauty. Ostriches run with a loping speed that belies the goofy caricature that is their bodies. Warthogs and red river hogs grunt and play in the muck. Elephants spray themselves in the distance, like something out of Isak Dinesen. Watching animals eat is almost as much fun as feeding them. Most of the animals graze. A few are given food at specific times as part of their training exercises. You can watch predators (lion or cheetah) engage in these exercises twice a day. Elephants have “encounters,” too. You can watch them train twice daily. But the elephants eat about 140 pounds of food a day, each, so they consume more than the paltry food given during encounters. Baskets of grass hang close to the fences. Elephants lumber over from their muddy watering holes and grab the browning straws, their trunks pendulums, swinging the food in. The mouth opens like a drawbridge, then closes. Grab, swing, open, close: hunger’s rhythm. How well I know this rhythm. How well, I suspect, every parent knows this rhythm. Breakfast, snack, lunch, snack, dinner. Dessert. Don’t forget dessert, Mom. On a canvas-covered divan inside the Simmons Safari Base Camp, I settled the kids and pulled out our squishy bags of raisins and whole yellow bananas. They ate with both hands.

Afterward, we wandered over to the exhibit’s Serengeti Grill restaurant, where one wall is made entirely of glass. On the other side is a pride of lions, each of which can come right up to the window. A child can press her hand to the transparent wall, only inches between her and the lion’s nose. The glass is 4.5 inches thick, the width of a large city’s phone book. Even so, the sight is unsettling: the lioness, mouth casually open, 4.5 inches from my daughter. You, lioness; you, cheetah; you, predator of any stripe and size; you I do not ever care to watch eat.

It is fair to say that my children hunger for the zoo, for the springy ground coverings and toddler-friendly water feature at the Lacerte Family Children’s Zoo. For the main zoo’s smooth, wide paths and child-height rails that provide excellent space first for running, then for gripping steel bars and flipping in endless aerial somersaults. And, of course, there’s a carousel. For my daughter, the zoo’s various spaces are often the attraction; the animals sometimes are an afterthought. Feeding them is not.

Nor is it for me. I always liked food and cooking and valued eating well. Even so, feeding my children satisfies me in an unexpected gut-level way. The animal me purrs each time I make peanut butter sandwiches, but it’s my most complete self who takes my children to feed giraffes at the zoo, our arms outstretched, long giraffe faces leaning in, a single brown cracker the point of contact between us.