Tone Bell, a Dallas comic with unhurried pacing and killer timing, does a funny bit about a guy eating cake in an airport. In fact, airports are Bell’s favorite place to people-watch. His second-favorite place is Pete’s Dueling Piano Bar. Here’s how Pete’s works: charge $8 at the door. Have four guys and two pianos. Rotate the guys in, sometimes have all four playing classic sing-along tunes from Billy Joel’s “Piano Man” and Neil Diamond’s “Sweet Caroline” to Lee Greenwood’s “God Bless the USA.” Have conga lines and bring a bachelorette up onstage. Salute the veterans in the house and make a few sex jokes. Don’t let it get quiet or reflective. Keep the music and the antics up so that folks can party like it’s 1999 (sadly, there were no Prince songs the night I visited).

Rumor has it Pete’s pours a stiff drink (I specifically asked for a weak one for that reason). It offers shots in test tubes and has a Margaritaville vibe. The bar is an escape, a place people anticipate singing. And not the on-the-stage-everyone-is-looking-at-you singing of a karaoke bar. Pete’s is filled with the conviviality of singing together, arm in arm, the anonymity and togetherness of Bon Jovi ballads belted at a volume that might leave vocal cords sore the next day.

Pete’s and the Improv Comedy Club share a building, so the comics often come over for drinks after shows. Tom Green slipped in once, had a drink, played a drum solo, and then left. Tracy Morgan stopped by, too. And local comics hang out at Pete’s frequently. They know the bartenders well and refer to them as family.

“Everyone is so nice,” says comic Raj Sharma, a tall man with an epic wingspan and an energetic jocularity. He’s referring to the staff. The people cover a broader range. “You’re never alone at Pete’s because you have so many thoughts” about the patrons, Sharma says, swirling his hands around his head in a mimicry of the thoughts inside. 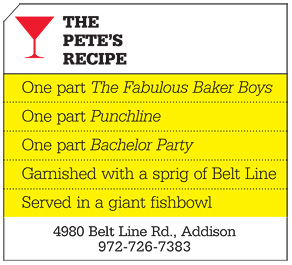 Sitting at the bar with his friend Bell, Sharma launches into a riff about people wearing Affliction clothes and a guy nearby who looks like he ironed one side of his shirt too much. It’s funny stuff—and, of course, both he and Bell are dead-on about the people-watching. Everyone comes to Pete’s: a woman with hair teased so high I am sure she’s a hipster doing a B-52s thing, till she pats her husband’s bum, the husband being an utterly unironic creased-Wrangler-wearing fiftysomething; guys in their 40s, graying temples and Patagonia fleeces; taciturn men in black cowboy hats; women sparkled up; bachelorette parties; people with tattoos, ball caps, or ropers; three generations of a family all at one table.

You can’t mix that much energy and that many people and have a dull night. Every kind of night-out adventure happens. Sharma and Bell mention that about every four hours, someone cries (oh, the sad, drunk crier). Someone falls down the stairs. (Sharma has done it once or twice. They are slick, narrow, turning stairs, hard to navigate stone cold sober.) The cabs are lined up outside. And, well, people who come in by themselves don’t necessarily leave that way. There’s something about the magic of a shared Journey song.

Bars like Pete’s—and there’s a Pete’s in Austin, Houston, Fort Worth, and Vegas—are perhaps best known for school song rivalries. People tip the maestros to play a school song; others tip more to play a rival’s song. Before long, you’re talking about rowdy crowds sing-fighting and, on a good night, a $500 tip jar. It’s easy to assume the piano players get their money for nothing, to quote Dire Straits, but it’s clear the players earn their scratch. They are showmen, able to gauge and swing a crowd’s mood. Offstage, one player looks tired and completely ordinary, a guy getting ready for work. Onstage, he is the life of the party, the guy women crush on and men admire, the guy who can cheer them up and on and show them the way to fun. There’s an intensely difficult art to that.

It’s an art very similar to comedy: reading people, using body and sound and pacing to jostle them into laughing, into having fun. Just watch how far you take it. Because chances are, there are a couple of comics sitting at the bar, watching your every move.