There is a difference between running for exercise and running compulsively, for unnatural distances, because you have the disease. I fall under this latter category. I am compelled to run. I write gigantic checks that, in the future, my 60-year-old knees will one day have to cash.

I cannot tolerate treadmills. They make me feel like part of some futuristic dystopia, like the large bank of “running” machines is really designed to help power some North Korean nuclear plant. I am also apprehensive about making that crucial misstep that would brand me with an impressive face scab. Better, I think, to stick to the concrete and asphalt that moves at a pace I control.

The best side effect of my compulsion is that it allows me to see more of the city. I never really felt like a Dallasite until the day I ran 3.5 miles to the “X” in the road that marks where John F. Kennedy was shot and then back to my apartment. Morbid, I know, but also a great way to tour the length of downtown. I like plotting other routes through forgotten parts of the city, like my 8-mile journey through South Dallas, where I coast down Malcolm X Boulevard before making a left on Pine Street. It’s a completely different perspective down there, making one friend’s description of Dallas as being like “white rice” sound ignorant.

So it was with much interest that I watched the Santa Fe Trail develop through the part of the city that I least expected to get its own running track. The Santa Fe is one of the newest in a series of running and biking paths, all aiming to make Dallas a fitter, happier city. It was mostly completed late last fall, creating an almost continuous route between the Deep Ellum area and White Rock Lake. Along with the Katy, White Rock, and Cottonwood trails, the Santa Fe adds to what will someday be a huge network of recreation paths connecting all of North Texas. When the Santa Fe was finished, I set out to run its length. 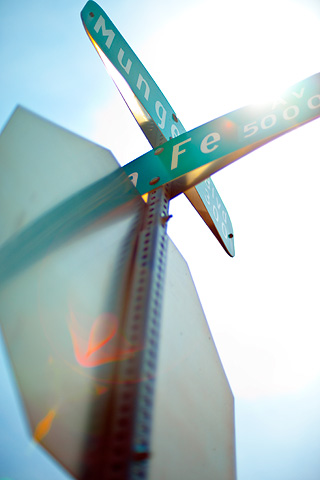 The trail was laid with an austerity that says, “This place is for stoics without bandoleers of energy drinks and stupid-looking hats." photography by Elizabeth Lavin
photography by Elizabeth Lavin
The western terminus of the Santa Fe emerges from the ground like a tree root at the nexus of Deep Ellum, Fair Park, and East Dallas. It starts where South Hill Avenue begins to duck under I-30. Two abandoned train rails buried in the asphalt road point the way east, down a concrete path bisected by a dashed yellow line.

The Santa Fe feels like East Dallas’ funky response to Uptown’s prissy Katy Trail. The path starts by rising to a high vantage of the surrounding cityscape. You can see real East Dallas from here. The trail winds past the Primera Iglesia Del Nazareno and multiple auto shops before dropping to eye level with residential East Dallas. Car yards are shielded by corrugated tin. Packed, working-class houses line the trail. Unlike the Katy, which almost prides itself on remaining hidden, there is no barrier between you and the neighborhood. You are a part of it.

Also unlike other Dallas recreational paths, the Santa Fe offers no amenities. There are no water fountains, no port-o-lets, and certainly no misting showers. The trail was laid with an austerity that says, “This place is for stoics without bandoleers of energy drinks and stupid-looking hats.” Shade trees, benches, and water supplies are in the long-term vision of the Friends of the Santa Fe Trail, the nonprofit that oversees the trail’s development. For now, the lack of conveniences befits the humble surroundings. You do have to compete with traffic at every cross street between Carroll and Glasgow, but all the drivers I encountered respected the runner’s right-of-way.

As I run the trail, I confront a cross-section of urban Dallas. I meet Hispanic men and women out for morning walks in their neighborhood. I pass a homeless man pushing a baby stroller crammed with his belongings. I zigzag through teenagers walking to Woodrow Wilson High School. The bikers are there, too, probably from Lakewood, Lance Armstrong wannabes whizzing past in garish spandex. Other than them, there are few athletic dilettantes out to flaunt their fashionable Lululemon sweat-wear. I dream of making t-shirts: “The Santa Fe is for Utilitarians.”

The Santa Fe Trail closely shadows the path of its namesake, the Gulf, Colorado and Santa Fe Railway, which once cut through downtown Dallas before heading east, out of the city. There are few remnants of the former railway along the current running path. There is only the long ditch where I imagine the tracks once sat and the lonely, road-crossing rails that begin the trail. Regardless, it is nice to run along a route that has the weight of history behind it.

Eventually, the trail cuts behind the Lakewood Country Club golf course and turns to flank Lindsley Park. There, I marvel at the ample greenery and am amazed that Dallas has this much nature to spare. This makes sense, given that the trail glances off the untouched corridor that feeds into Rochester Park. After that, the trail makes a sharp left, deviating from its coincidence with the old railway, and moves under the last railroad artifact: an old bridge whose concrete foundation is covered with graffiti. I hope no one at the Park Department thinks it would be an act of beautification to paint over the colorful scrawls with the graffiti-eradicating gray that the city favors.

For its last three-quarters of a mile, the Santa Fe becomes progressively more Katy-like, gliding under a canopy of trees that cloaks the surrounding landscape. It spits out into the open air, giving the last of its aerial views: the White Rock Lake spillway beverage stores and a Cash America Pawn. A short stretch beyond that, and the trail almost connects with the White Rock loop, completing its 4-mile journey from urban actuality to a manmade lake.

The Santa Fe itself is not quite complete. Friends of the Santa Fe would like to see another mile added to connect the trail to Deep Ellum via the Baylor light rail station. The outdoor culture in general seems to be accelerating in Dallas. The city’s Park and Recreation Department lists the combined length of existing trails at approximately 104 miles, with another 170 miles in development. If our willful North Texas burg excels at anything, it’s ambition. Turning Dallas into the fittest of American cities is probably unrealistic, but, as the saying goes, you don’t have to be faster than the bear, you just have to be faster than Houston.