Dallas, it’s time to wake up and taste the mole. For too many years, you’ve treated any dish served with a mole as if it were an infectious disease. Perhaps poor misunderstood mole needs a Facebook page to get you to like it. Once you’re friends, you can dig deeper into its profile and get familiar with not just mole’s complex personality but some of Mexico’s other spirited ingredients.

You will learn the word “mole” is simply a Spanish term for sauce. Almost every city, town, or street vendor on the plaza of a village has its own variety of mole rooted in the local culture. There are red, yellow, green, rusty brown, and black moles, each a unique concoction started with rehydrated chiles (traditionally a combination of pasilla, ancho, and cascabel) that are thickened with ground nuts, seeds, corn, or bread and seasoned with dozens of herbs. Some moles are based on sweet-and-tangy tomatoes or poblano peppers; others are invigorated by raisins or plums. The dark, dense, and intense mole negro from Oaxaca leaves a mysterious hint of unsweetened chocolate on the palate.

If you don’t make an effort to like this food, you will miss the hottest culinary trend in Dallas, and I know how you hate to be out of the loop. Regional Mexican cuisine takes you beyond the enchiladas, rice, and beans of Tex-Mex to dishes prepared with guajillo peppers, corn smut, and lengua. Buck up. It’s time to take the plunge. You can start with the gentle offerings at Komali.

After five years of serving modern New American cuisine with an international twist at his eponymous restaurant, Salum, chef Abraham Salum opened Komali, a restaurant that pays homage to the flavors he remembers from growing up in Mexico City. The quiet chef with the infectious smile has a colorful heritage. His parents were born in Mexico (his dad to Lebanese parents). He grew up on meals cooked by his Spanish and Lebanese grandmothers. “My Spanish grandmother combined cuisines,” Salum says. “She cooked Mexican dishes like tamales and meatballs, plus a lot of octopus and the best bacalao [a traditional Spanish dish of salted cod, tomatoes, olive oil, garlic, and onions]. My other grandmother made Arabic food like lamb and tabbouleh.”

At Komali, chef Salum presents his own interpretation of authentic Mexican food. He faces a lot of competition. Small spots such as Mesa, El Ranchito, Veracruz, and Cafe San Miguel are serving great regional Mexican food. Maximo and Alma, the newest upscale modern Mexican eatery opened by Tristan Simon and cheffed by Rick Bayless-trained chef Michael Brown, are charging big bucks for fancy Mexican-style enchiladas. This summer, talented chef Gabriel DeLeon (Masaryk Modern Mexican Kitchen) will start work in a new restaurant called Mi Dia in Grapevine. And former Ciudad owner and chef Monica Greene promises “the real deal” will open in December at her yet to be named contemporary Mexican restaurant in the Illume on Cedar Springs.

So far, chef Salum is holding his own. He seduced his loyal Park Cities crowd at Salum to try his new food next door. It’s no surprise that the No. 1 seller is chicken enchiladas topped with tomatillo salsa, avocado, and Mexican crema. Asked if this dish was a compromise for diners having difficulty moving past Tex-Mex, Salum says, “I was worried that people wouldn’t understand the difference between Mexican and Tex-Mex, which is full of chili, yellow cheese, and sour cream.” 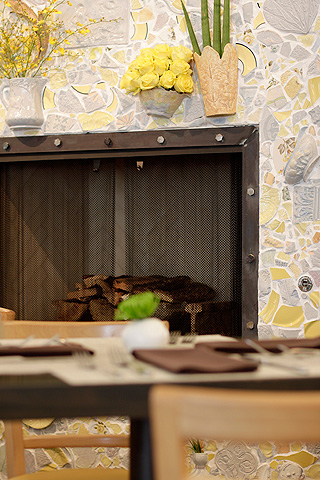 Mosaic fireplace. photography by Kevin Marple
photography by Kevin Marple
While Komali offers “safe” options such as chicken enchiladas, chef Salum is dedicated to using classic cooking techniques and ingredients to sate those diners who crave real regional Mexican cuisine. Corn tortillas are hand patted in the kitchen. Tamales are prepared by women from Oaxaca. The queso fresco is made by a friend of Luisa Sanchez’s, the chef de cuisine at Komali. Chef Salum convinced the folks at Caprino Royale, a small goat dairy and cheese factory in Waco, to make cajeta, the sweet caramel sauce he pours over chocolate flan and light, folded crepes.

After three visits, I came to prefer lunch and cocktail hour over dinner service, mainly because the long list of appetizers and sopas are some of Komali’s most authentic dishes. I like creating a more intimate eating experience by combining the small plates from various regions of Mexico.

If you stop by late in the afternoon and order drinks, they are accompanied by a platter of nibbles that might include miniature sopes, taquitos, quesadillas, albóndigas, or tostadas. If you’re lucky, you’ll get several of the little deep-fried tortillas filled with cheese and seasoned with huitlacoche, a fungus spore harvested from corn. Huitlacoche is also known as corn smut. While Komali’s deep-fried tortillas resemble empanadas, the crispy concoctions are what you get when you order quesadillas in Mexico. You won’t find huitlacoche listed on the menu. And if a customer asks what gives the quesadilla its earthy flavor, Salum spins it sweetly, describing it as “a truffle that grows on corn.”