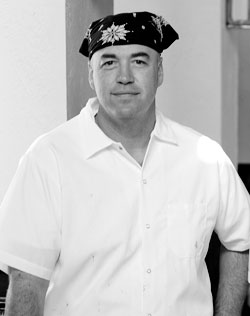 Chef Tom Fleming photography by Kevin Marple
photography by Kevin Marple
Chef Tom Fleming has an affinity for fine Alsatian wine. He developed his taste for the dry Rieslings and aromatic Gewürztraminers produced in the northeast region of France in 1990 when he apprenticed under classical French chef Paul Haeberlin at L’Auberge de l’Ill. The restaurant in the small town of Illhaeusern was established in 1878 by Haeberlin’s grandfather in an old farmhouse. L’Auberge de l’Ill received its first Michelin star in 1952, one in 1957, its third in 1967, and has maintained three-star status for more than four decades.

Fleming went on to cook all over France, the East Coast of the United States, and eventually back in his hometown of Chicago, where he was opening chef for Jean Joho’s Brasserie JO, which won a James Beard Award for Best New Restaurant in 1996. A year later, Stephan Pyles lured him to Dallas to launch the short-lived AquaKnox. While the project was delayed, Fleming hooked up with David Holben, then executive chef at Mediterraneo. Fleming signed on as chef de cuisine and worked there for 18 months before Holben introduced him to Franco Bertolasi, proprietor of The Riviera, which had ranked as the top restaurant in Dallas for nearly two decades. Fleming cooked there for two years, wowing the public and critics alike.

All of which make his latest venture something of a curiosity. Fleming no longer turns out lacquered duck or braised partridge. At his Crossroads Diner, he makes pancakes. It’s as if David Hockney decided to quit the art world, grab a can of Sherwin-Williams, and start painting houses for a living.

“I love fine dining, and I’m still passionate about it,” Fleming says. “But I don’t want to do it. I want to spend time with my two daughters [ages 6 and 9], and I want to own my own place.”

His new place, once home to Cantina Laredo, Flanigan’s, and a tacky Chinese buffet restaurant, sits on Walnut Hill, just east of Central Expressway. You can’t miss it. It’s a freestanding building with a huge mural of a fetching dark-haired woman clutching a sticky bun. “Her name is Rebecca,” Fleming says. “We decided we wanted to promote our homemade sticky buns with a mascot.”

Has Fleming lost his mind? Hardly. He has created a scenario that allows him to balance his zeal for cooking with the need to be around his family. Instead of working the late-night hours required of a haute cuisine chef, he’s at work by 5 in the morning and back home in time to greet the girls when they get in from school. His wife, Karen, runs the front of the house. On weekends, the kids come in to do roll ups and other light chores.

Fleming’s partner and co-chef is Carl Strelecki, former owner of Standard. The two worked together in the kitchens of Lombardi Mare, Lobster Ranch, and Central 214. They’ve both “had it with fine dining” and are now dedicated to cooking good, simple food made from scratch using as many local ingredients as possible.

The breakfast menu is a doozie. The star is the sticky bun, a 4-inch-by-2-inch yeasty roll filled with cinnamon, brown sugar, and pecans, covered with a thick caramel pecan sauce. Treat it as an appetizer for a table of four if you plan to eat anything else.

Like pancakes. Perhaps Fleming’s time in France helped him perfect the fine art of producing the perfect pancake. He makes them in small batches, a technique that keeps the baking powder and baking soda from overactivating, producing pancakes that are light and airy. The buttermilk, pecan, whole wheat, and cinnamon-apple pancakes are served with a side of warm syrup that Fleming makes by adding sugar water to a “secret source” pure maple extract he buys from a small supplier in New England. His deft touch is also evident in the house-made biscuits, muffins, flour tortillas, and a stunning apple crisp. Fleming coats chunks of Granny Smith apple with nutmeg, allspice, cinnamon, and brown sugar. The warm caramelized apples are wrapped with a gently ruffled collar of thin pastry—elegance I’ve never seen in a diner.

Instead of omelets, Fleming offers an assortment of frittatas. Okay, they are basically the same, but it’s easier to cook a frittata in a restaurant. Instead of relying on a line cook to get the right consistency after folding the mixture of an omelet, a frittata is not cooked on both sides. Therefore, you are less likely to receive a hard, rubbery combination of meat, cheese, and vegetables. I despise overcooked, dense eggs. At Crossroads Diner, the frittatas are fluffy and filled with inspired ingredients. One Sunday morning, we sampled two frittatas, one with roasted red pepper, Mozzarella Company goat cheese, and spicy chorizo and another filled with kalamata olives, feta cheese, and sun-dried tomato. The eggs were hot but not heavy. Small cubes of firm goat cheese poked out from the eggs. As I ate my way across the plate, they melted into luscious little pools of warm cheese.

Lovers of breakfast pork will not be denied. The best dish we tried was the pork hash with eggs. Smoked over apple wood in Fleming’s kitchen, the pork is mixed with shredded potatoes, grilled, and accompanied by your choice of eggs. The whole delicious mess was covered with a piquant green chile salsa. Of course, we added a short stack on the side. Despite bottomless cups of Illy dark-roasted coffee, we went home and napped away most of the day. 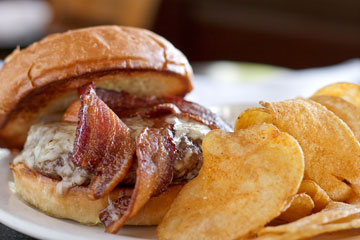 Bacon cheeseburger with house-made chips photography by Kevin Marple
photography by Kevin Marple
It’s also easy to get gluttonous at lunch. The griddled Crossroads cheeseburger is 10 ounces of Black Angus beef and a thick slab of melted cheddar cheese atop a fresh bun made by Empire Baking Company. Offered at $9, it’s a big meal even for two people. What, you want fries with that? Sorry, no fries. Fleming makes fresh potato chips, which he seasons with secret ingredients he learned from his mother.

Fleming’s bag of stealthy tricks is filled with recipes and tips passed down from the long line of cooks in his family. His mother was a classically trained chef. “My mom’s side of the family had someone in the cooking profession for four generations,” Fleming says. “Her great aunt ran food service for the Illinois Central Railroad from 1895 to 1920.” Fleming is the youngest of seven children. His oldest brother, Robert, has made a name for himself in San Antonio. He owns the successful Magnolia Pancake Haus and claims his business is “built around a recipe for ‘The World’s Best’ buttermilk pancakes.” If Robert is right, I am moving south. I can’t imagine pancakes better than those I tried at Crossroads Diner.

You can taste the generations of influence in Fleming’s special touches. Pickle juice is added to the tuna salad, which is mixed with a garlic-scented mayonnaise and presented on toasted wheat bread. A gentle hint of curry is evident in the chicken salad sandwich. A flaky crust cradles the quiche with bacon, spinach, and goat cheese—the most delicious I’ve tasted in years. The only disappointing dish I experienced was My Mom’s Egg Salad. The eggs were finely chopped and drowned in a runny, rust-colored mayonnaise. Oddly, the concoction was tasteless and not worth the calories to investigate why. Later that week, Fleming redeemed his mother’s reputation by producing a solid version of her meatloaf. The generous portion was an intense mixture of ground veal, beef, and pork covered with rich mushroom sauce.

Fleming admits the interior, like the menu, is still a work in progress. The lower third of the white walls is trimmed with dark brown beadboard wainscoting reminiscent of a late-’70s fern bar. Huge pillars and high ceilings are lighted by sconces adorned with crossed industrial forks and spoons. A few cheesy generic posters of chickens detract from a colorful mural of the Dallas skyline painted by local artist Randy Stark, who also created the delightful painting of Rebecca and the sticky bun on the restaurant’s exterior. Fleming, whose hobby is cabinetry, made the stained maple plywood benches that fit between the columns. He and Karen upholstered them with maroon-, brown-, green-, and blue-striped fabric. Fleming is also pretty proud of the “chandelier” he created using old 30-, 60-, and 80-quart Hobart mixers.

Even during a busy lunch rush, service was friendly and efficient. On one visit, our cheery waitress urged us to join the sticky bun club. I thought she was kidding. “No, it’s an actual club with a card,” Fleming says. “For every 10 you eat, you get one free.”

While I had him on the phone, I asked if there were any other details he cared to share with me. “Carl is handling the simple wine list based on small producers using good juice, but I gave him one requirement,” Fleming says. “I want to serve an Alsatian wine in a Riedel glass.”

Hugel Gentil, a blend of the noble grapes of Alsace, is available for $6.25 a glass and $26 a bottle. Somewhere in culinary heaven the great French chef Paul Haeberlin is smiling.