Correction: We incorrectly referenced Rich Wyll as a Jewish hitman. He was not a hitman. We regret the error. 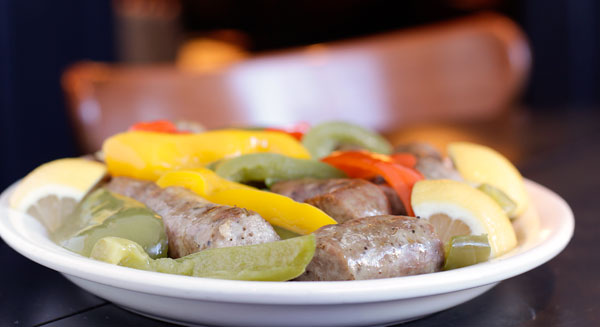 Sausage and peppers photography by Kevin Marple
photography by Kevin Marple
If the walls of this iconic Dallas restaurant could talk, we would certainly know more about its colorful history than its Wikipedia page relays. Founded by Joseph Campisi in 1946, the dark  and dingy spot is well-known for two of its former customers: Jack Ruby (who allegedly dined here the night before he killed Oswald) and Rick Wyll, a famous Jewish hit man. Hence, rumors of mob connections have swirled around the restaurant for more than 50 years. I’ve never looked good in cement shoes, so I’ll go on the record as saying the pizza at the Egyptian is still some of the best in town. The familiar oval shape is always delivered piping hot. The sausage and peppers? Not so much. Recently the alleged house-made sausage set in front of me was cold in the center and tasted of freezer burn. Even a generous side of spaghetti drowning in marinara couldn’t save it. However, you haven’t really dined in Dallas until you’ve spent an evening in one of the deteriorating red booths and watched the bar crowd. Many of the current customers were probably sitting in the same chairs back in 1963. Perhaps next to Ruby.