If today marked your first visit to the northeast corner of Fry and Hickory streets in my hometown of Denton, you wouldn’t understand what all the fuss was about. Stand there now and you’ll see a few empty acres surrounded by a chain-link fence. There’s a barbershop and an empty corner store on the other end of Fry. Cool Bean’s, literally half the bar it used to be (though you wouldn’t know that either), is just a bit down Hickory. But mostly you’ll see emptiness and inactivity. You’ll have no idea what’s missing or sense the energy that filled that block just a few years ago.

When I’m there now, I picture what used to be a typical Saturday night. A crowd loiters on the sidewalk. Pale-skinned Goth kids dressed in black rub elbows with shaggy guys strumming guitars and co-eds heading for the nearby bars.

What brought the huddled masses of Denton to this spot, and held them in its orbit, was the Tomato. It was the sort of neighborhood pizza parlor that I’d imagine existing only in some movie about a small town if I hadn’t been there countless times myself. In that grungy wonderland, with its split-level seating areas and strangely uneven lighting, it was easy to find a dark corner table at which to camp out with friends for hours. 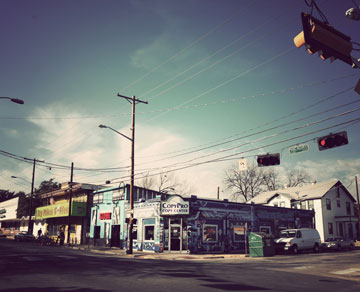 Fry Street photography by Bud Force
photography by Bud Force
“It was a place where you go to see people and go to be seen. It wasn’t just all about the pizza,” says Becky Slusarski, who co-owned the Tomato with her husband, Robert “Ski” Slusarski. The couple started as the restaurant’s managers when it opened in 1984 as the Flying Tomato. They bought the place in 1996 and truncated the name two years later because that’s what everyone called it anyway.

For more than 20 years, the Tomato was a constant comfort at the center of the collection of bars, restaurants, and shops known simply as Fry Street. Kids who first visited with their parents grew to hang out there as teenagers and then got hired to work the kitchen when they enrolled across the street at UNT. “Family” is a word the Slusarskis use often when discussing both their employees and their customers, and it’s apt to describe the Tomato as one big family room.

The couple was crushed in 2007 when they were evicted from the restaurant space. Generations of Denton dwellers suffered right along with them. A developer had bought most of the block and was planning to tear down its 1920s-era buildings to install a CVS.

The outcry from the Fry Street faithful was immediate. More than 11,000 people signed a petition asking the developer to preserve the existing buildings, but it made no difference. The Tomato and its neighbors were razed, though not before someone set the beloved pizza joint ablaze in an act of misguided rebellion. (No one was ever convicted of the arson.) The CVS project fell apart when the city balked at plans for a drive-through pharmacy. Otherwise you’d stand on that corner today and watch customers walk in to fill prescriptions or buy Q-tips. I doubt there’d be a Goth kid in sight.

For three and a half years, the Tomato’s block has remained in limbo, but if you return there this spring, you can expect to see dirt turning. Last summer, a new developer won approval to build a four-story mixed-use complex for retail and student housing. They hope to be under way this month or next and are targeting completion in fall 2012. The new project will be shiny and new and will undoubtedly bring rents on its 10,500 square feet of retail better suited to national chains than mom-and-pops. Though the developers won’t discuss who has shown interest, it’s easy to imagine spots like Starbucks, Chipotle, and Quiznos setting up shop.

Bob Clifton, a pleasantly cantankerous 70-year-old who operated a small movie theater on Fry Street in the 1960s and has spent most his life in the city, can’t stand the notion. “The thing about Denton, the thing that attracts people to Denton, is Denton was a funky town. Musicians could come up here, 10 of them live in a f—ing house, dope flows like it’s going out style, everybody’s laid-back, not giving a s— about nothing, and it’s just funky,” he says. “They’re turning it into Plano.”

Clifton has drafted a petition that could force the City Council to call an election to amend the ordinance that paved the way for the new development. He knows the block will never be what it once was, and he’d rather force the city to designate it parkland than let anything new go up. As of early December, he’d just begun his drive for signatures—he needs almost 800—but he maintains high hopes that he can block the new development.

Mike Cochran, a former City Council member and local historic preservation activist, thinks Clifton is harboring a pipe dream. The ship has sailed, and it looks to Cochran like the new development is about as good as it’s going to get. That doesn’t mean he’s happy about it. “Your physical buildings reinforce your sense of community because it’s something that’s passed on from generation to generation. People may change, cars may change, everything else, but if you’ve some physical manifestation that passes from one generation to the next, it sort of does reinforce the community,” he says. “That is definitely lost.” 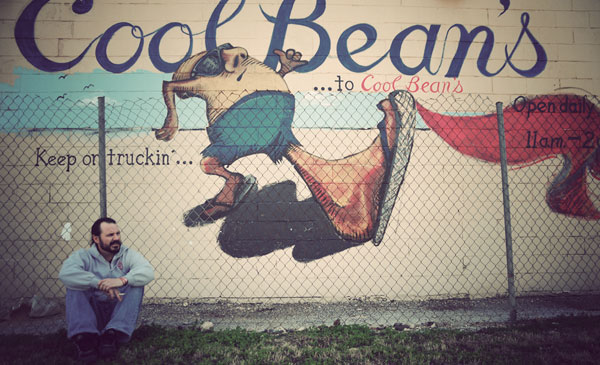 Cool Bean's bar will remain, even as a huge new apartment building is erected around it. photography by Bud Force
photography by Bud Force
Well, that, and a unique brand of pizza. Unlike the other restaurant refugees from the block, Bagheri’s and Mr. Chopsticks, the Tomato hasn’t reopened elsewhere. The bad economy and a lack of money have held the Slusarskis back. That’s probably for the best. The Tomato wouldn’t really be the Tomato anywhere else.

However, there’s now a glimmer—just the tiniest glimmer—of hope. The Slusarskis have signed a letter of intent to take space in the new development. Sure, the rent will be many times more than they paid for their old location, but a group of former Tomato employees has banded together to help raise the capital. They’ve turned to unconventional means for the cause. In October, they put on a rock-show fundraiser and hope to throw another in the spring. Talking all this over with the Slusarskis recently in the back room of Cool Bean’s (which will stay put even as the huge new apartment building is erected around it), they don’t seem terribly optimistic.

Neither am I. I’ve already made up my mind to abhor whatever eventually appears on that land. I haven’t got much choice, the way that it carelessly destroyed a place so replete with memories and so precious to so many.

But who cares what I think? I haven’t lived in Denton in years. I haven’t visited Fry Street regularly in almost a decade. Who am I to begrudge some UNT freshman the joy of walking right across the street from campus for a cup of Starbucks coffee or a Quiznos sub or a frozen yogurt or whatever? That kid won’t know what he’s missing. He won’t care that it’s a scientifically proven fact that it’s impossible for a person to create fond memories of a place as fungible as a Chipotle. He won’t understand the glorious joy of wasting hours of youth shooting the breeze with buddies over a made-to-order pie. He’ll just be thankful for a great lunch option.

And if that’s all he requires out of life, then maybe he’s better off anyway. Truth be told, I was never a huge fan of the Tomato’s pizza. The pizza was beside the point.