It’s an easy enough thing to teach, the fine distinctions between connotation and denotation, but impossible sometimes to grasp. The figurative is so slippery, so constantly on the move. And the literal is shaky enough to begin with. But what fun is the world if we never even try? If there is a difference between the metaphysical and the actual, a difference between soul and foot, between dirt and hearth, then place, not location, is what matters.

My husband and I read about Jack’s Backyard before we went there. We were on the hunt for a Lee Harvey’s but closer, faster to get home from, because kids fall asleep so quickly in the backseat when they’re full of burgers and exhausted from running through grounds blanketed in dusty rocks. We loved Lee Harvey’s fire pits, the waiter who slipped out with marshmallows for the kids, the too-skinny musicians drinking beer a few tables over. And Jack’s, off west Commerce in a dilapidated stretch of Oak Cliff earmarked for revitalization, had the same rough-warm look as Lee Harvey’s, the same kinship to Austin.

The Austin vibe at Jack’s comes from an accretion of decisions: the patio is 3,000 square feet large. Bands play a big wooden stage with a postindustrial backdrop made from a shipping container. Weeknights there is no cover. Mondays there is a busy poker game. There’s a photo booth where you can sit on the lap of your other. The beer is cold, and corrugated metal abounds. There is brunch, too, and a menu of comfort pub food, including a short menu for kids.

The stained cement floor is marked by paint left by the auto body shop that preceded Jack’s at this address. The shadows, too, have a history, an unexpected story. Of the five lights against a modern cinderblock wall, two throw off completely different shades of gray from the other three, round and perfect. On opening night, the owner plugged identical bulbs into each fixture, planned for each to be the same, turned them on, and—voila—the lights took on a shady life of their own. Opening night was also Halloween.

A bartender pours a drink. photography by Shane Kislack
photography by Shane Kislack
The owners wanted a bar that was welcoming to all. Kathy Jack had spent more than 20 years in the bar business when she opened her Backyard with her partner in business and life, the chef-caterer Susie Buck. Some nights gay women congregate at the bar. Some evenings straight folks do or gay men or even a family with a kid or two. It depends on the band, the night. Everyone seemed comfortable on all of my visits, no matter the breakdown.

In the two years it has been open, Jack’s Backyard has won awards from the Dallas Voice (as well as D Magazine). One Voice award was for Best Off the Beaten Path bar, but Jack’s Backyard may be soundly on the path soon. The trailer park just behind Jack’s, where sometimes now you can hear voices calling out to each other as you walk toward your car, has been targeted for a hip redesign. The trailer park owners hired Monte Anderson (developer of the neighboring Belmont Hotel), and the plan is to have small businesses run from spiffy trailers—gourmet food, maybe a tattoo parlor—similar to those that have popped up in towns such as Austin and Portland, Oregon. Gary Buckner, an Oak Cliff (i.e., local) carpenter-restaurateur, is already stylishly outfitting a few trailers with reclaimed materials in anticipation of demand. And the Sylvan Thirty mixed-use LEEDS development has begun demolition down the street. 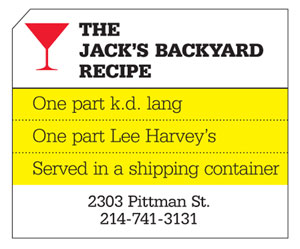 In so many ways, place is about identity, can be a shorthand for both who we are and how we wish to be perceived. I am from the United States. I am from Texas. I am an Oak Cliff dweller. My family comes from Ireland or San Francisco. Each statement says something different, something significant about the expectations, real or perceived, about who the speaker is. That the person grew up without fear of bloodshed when a new president was installed, perhaps; that the speaker knows something about cowboys. “To understand the world, you must first understand a place like Mississippi,” William Faulkner said. Or, to understand people in the world, you must first understand place. A place like Jack’s Backyard.
Write to [email protected]