Not since Neiman Marcus’ 1974 Japan Fortnight has Dallas been so perfectly feng shui. The occasion: 2010 Crystal Charity Ball’s An Evening in Imperial Kyoto at the Hilton Anatole benefiting numerous children’s charities. There were those who raised a tweezed eyebrow at the theme when ball chair Cynthia “The Gentle General” Mitchell announced it back in April. But they didn’t know Mitchell and the CCB gals.

Mitchell recruited event wizard Tom Addis and florist extraordinaire Junior Villanueva to make it happen. Guests entered through Torii-style gates to see a Zen garden where a worker methodically raked the sand while a geisha stood poised on a bridge. After perusing the silent auction and testing their luck at the casino, most sauntered over to the two-story teahouse, where Five Sixty’s chef Fuji prepared enough sushi to feed an army. Alas, CCB guests eat more than soldiers, and Fuji ran out just as the doors to the ballroom opened.

There guests discovered what appeared to be a dazzling forest of cherry blossoms in sky-high centerpieces, surrounded by walls of Japanese tapestries. Even Buddy the Anatole waiter, a veteran of many balls, said, “This is the most beautiful of all of ’em.”

But the blue-ribboned and Botoxed crowd hardly had time to find their tables when Taiko drummers announced the show was starting. The gargantuan dance floor had Japanese dancers with parasols, fans, and swords performing, while the likes of Margot and Ross Perot, Sheila and Jody Grant, Marilyn Augur, and Linda and Bill Custard looked on from the sidelines like kids at their first circus.

To match the beauty of the evening, Dallas’ we-know-fashion set did not disappoint. Texas hair maestro Céron, with Houston’s Diane Farb on his arm, barely made it to the reception after an afternoon of curling and swirling. As for jewelry, a handful of lucky gals borrowed their bling for the night from their buds Bill Noble and Richard Eiseman.

An interesting fashion note was the reappearance of fur on the scene. But these fuzzies never saw the cloak room. Nancy Dedman and Doris Jacobs both sported flawless chinchilla stoles, and nothing was going to get between them and their furry friends. Asked about Doris’ shoulder hugger, husband Jack replied, “I got a cloth coat because that’s all we could afford.” 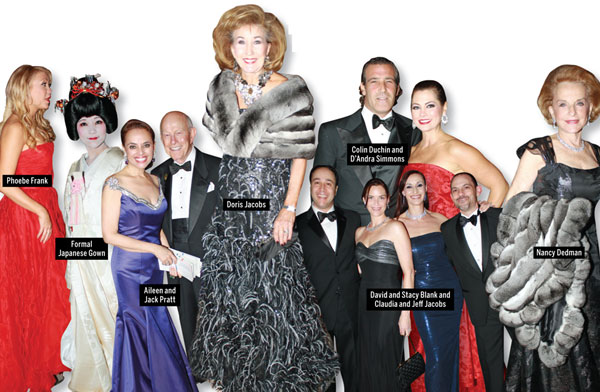