It seems axiomatic to say that parents of young children are busy. Even so, I am often amazed by how dense my life is, how compressed. My kids are little, and my husband is in medical school. I work. Some days I look up and realize I have not talked to friends in weeks. Other days I lose proper sense of time, lose all awareness of how close or far away October is. So when my husband and I spent 48 hours in Fort Worth, the kids back home with their grandparents, we did not go to the Kimbell or the Modern. We didn’t go to the zoo or the Stockyards or the Botanic Garden. We slept. We walked. We went to the movies—twice. We talked to each other and sat in a bookstore. We read, each of us, quietly and still. And we went to a bar: The Usual.

The Usual was opened in November of 2009 by three guys, Jon Carney and Brad Hensarling of the Chat Room Pub down the street, and Juan Solis. They opened The Usual in part because they saw a need for a place to get real cocktails, a place where someone would know what a sidecar is. Basically, they caught the cocktail bug. It took a little while to work out the kinks. People complained about the “Dallas” or “New York” cost of the cocktails (initially $7 to $12, now $7 to $9). The drink menu is mutable and evolves. Hensarling’s descriptions are mouthy and often hilarious, deflating the notion that a cocktail bar has to be pretentiously highfalutin. For example, the description of the pisco sour: “Before you ask what pisco is, I want to remind you that you do have an iPhone.” Another drink (sadly no longer on the menu) was described thusly: “Hello. My name is Inigo Montoya. You killed my father. Prepare to die.”

My husband was in charge of the jukebox and he was gone a long time; the choices were endless, it being a digital box with zillions of songs, rather than a more formally curated one. Minutes, hours, later he returned to his seat. It took a long time for his songs to play, and then two songs into the 20 he’d chosen, the DJ took over. I was sorry. John is good at choosing the right music for a moment. 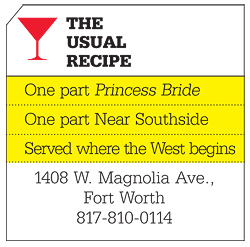 Our musical interruption aside, The Usual is an easy space to be in, modern, comfortable, and filled with blond wood. The booths are raised from the floor and almost recessed into the wall. If you sit in one and glance across the room to another, it’s like looking at a framed scene, a diorama of other people’s lives. Seven tables with a total of 28 chairs line the cement floor and can be rearranged to accommodate the nightlife evolution. It felt fluid and intimate and cozy, partly because of the iron framework votives housed on a defunct brick fireplace. We had a second drink, then left as the bar was fully waking up so that we could still get a long night’s sleep.

There’s a luxury in skipping botanical gardens, in spending your first night in Munich seeing a Lord of the Rings film with friends. A guilty pleasure in spending whole afternoons in cafes or bars with people you know from Texas instead of wandering through another antiquities room at the Met. Sometimes I see films or hang in cafes because I want to be part of the regular life of cities, to meet the city in all its ordinariness. But more than that, I am playing with time. Sitting in a bar on a Sunday afternoon in a new city releases me from the urgency of departure. Having a lazy afternoon drink is the kind of thing I do when I take a city and its attractions for granted. And I can only take a city for granted if I have endless time there.

So I tricked myself in Fort Worth by going to a bookstore and the movies, by whiling away an early evening at The Usual, which somehow made time feel longer, bigger, as if our night were infinite.
Write to [email protected].