Standing outside city hall in Palmer, Texas, Joey Dauben declares, “Anyone who says the newspaper industry is a dying industry just has a dying business model.” He has just covered a City Council meeting for one of his newspapers, the Palmer Post. His story will report a water fee vote, the sale of some outdated police equipment—and the announcement of his own candidacy for mayor.

In February, Dauben achieved his goal of owning 30 newspapers by his 30th birthday, an unusual 21st-century benchmark in an era when our local dailies are laying off workers and trying controversial online paywall schemes. Dauben’s papers are different. They are of an earlier time, when debt service and stock price didn’t drive publishing decisions. For Dauben, small-town newspapering is about garnering political influence. It’s a crusade.

Dauben started out in 2001 working for a more traditional newspaper, the Ellis County Press. By 2005, frustrated with a publisher who shied away from controversy, he started his own news website, the Ellis County Observer. The Observer wasn’t afraid to trade in rumors and innuendo. It cultivated a colorful, if sometimes brutal, roster of commenters. The site was active enough that, in 2009, when Dauben moved to New Hampshire to enroll at Plymouth State University, he kept it running.

Here’s where it gets bizarre: in September 2009, Dauben was arrested in New Hampshire because police in Combine, Texas, said he had unlawfully obtained a photo of one of their officers and posted it on the Observer’s website, with a story about an alleged police sex abuse scandal. He remained in jail for 12 days while the mess was sorted out. (Dauben’s subsequent suit against the city of Combine for wrongful imprisonment is set for trial in 2012.)

While behind bars, Dauben decided he had a calling to come back to Texas and start newspapers in as many small towns as he could. “I don’t want small-town gypsy cops to do to other people what they did to me in Combine,” he says. “So if there’s a literal paper trail following these cops from town to town, we’ll have a better way of tracking them.”

Dauben is quick to add that he has other motives, too. “We have so much reliance on Hollywood, Washington, D.C., Austin, and all of this community fluff that there exists no way for people to know what is going on in their local city halls or courthouses,” he says. He also is unabashed about the fact that his newspapers are a vehicle to support the national conservative political agenda and the local politics of his supporters, all while furthering his own political career. 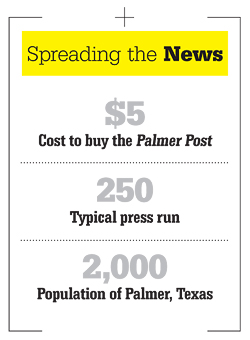 On his return to Texas, Dauben bought the assets of the near-defunct Palmer Post for $5, making it the first publication of his new DBA alias: the Freedom of the Press Group (FOTPG). He intends to incorporate the entity soon. He has launched another 29 papers, most of them monthlies sold in local shops for 50 cents a copy. Though the bulk of these papers are in smaller towns in Ellis and other outlying counties, Dauben plans to launch papers in Arlington, Irving, Richardson, and Rockwall in time for the May elections.

Dauben’s papers all feature alliterative names (e.g.: Venus Voice), coverage of local council meetings and city controversies, and common content advocating regional and national Tea Party positions, pro-life essays, and Messianic religious tenets. (Dauben is a professed Messianic Christian.) In Venus, a city employee is accused of taking a city-owned gazebo and placing it on his own property. Based on the say-so of unattributed sources, FOTPG will report sex scandals involving business and government leaders. All the papers contain a photo roster of all area elected officials.

The advertisers range from traditional small-town businesses—farmers markets, restaurants, gun shops, tax preparers—to the more personal and partisan. The avid pro-Constitution Oath Keepers, anti-vaccination groups, and even Dauben’s grandmother on the occasion of her birthday have all had ad space.

Though all the papers carry advertising, that’s not the heart of the business model. “Any town that can come up with the investors gets a paper,” Dauben says. When I press him, he tells me there is no business contract or fiduciary duty to these “investors.” Rather, they are generally locals with political or business interests who want to see a certain point of view portrayed in the press. The more support, the higher the paper’s frequency.

“The goal,” Dauben says, “is to be able to fund at least two people dedicated to every town, one to write news and the other selling ads.” For now, they are spread a bit thinner. Brandy Owen, the photographer at the Palmer meeting, is the editor in Frost, Rice, and Ennis. Last year, she ran as a Libertarian for Ellis County judge. She recently announced that she’s running for Kay Bailey Hutchison’s Senate seat in 2012.

Dauben’s staff of paid part-timers and volunteers attends town council meetings en masse, generally with one of them filming, one taking pictures, and at least one taking notes. At the Palmer meeting, they banter with the council, raising points of order and occasionally even translating between council members when they seem to have their wires crossed. Dauben, dressed in jeans, a t-shirt, and blazer, comes across as a soft-spoken casual observer rather than a rebel publisher.

It might be tempting for a Serious Journalist to write off these papers as partisan newsletters or to discount Dauben as just a particularly energetic crackpot. But consider the fact that in nearly half these towns, FOTPG papers are the only dedicated press, the only ones covering local council and school board meetings. The “investors” contribute or advertise to ensure that Dauben can “expose the unfruitful works of darkness” (a reference to the Book of Ephesians). The papers have a published policy of offering a full page of rebuttal space to anyone they cover.

Though a press run of 250 copies may sound small-time, in a town like Palmer with a population of 2,000, that’s a market share most newspapers would love to have. There are online components for all these papers, too. Although not all have their own website, they do have YouTube channels and, in a couple of markets, the number of views for video of council meetings on those channels is equal to a quarter of the population.

Dauben’s newspapers might not have the aesthetics or journalistic standards of a big-city daily. But the so-called objective newspaper is a creation of the latter part of the 20th century. And looking at what came before and might follow in the future, the newspapers we’ve grown accustomed to might be an anomaly. For more of their lifespan than not, newspapers in general have been political creatures. Governor Will Hobby rose to power on the heels of his editorship of the Houston Post, as did Post owner Ross Sterling. The Ferguson Forum was used by former Governor James E. Ferguson to turn around public perception of his impeachment, as well as to raise campaign funds.

As 20th-century-style newspapering becomes less profitable, Dauben might just be the model of the once-and-future publisher, covering the news while advocating his agenda. Maybe politics, not advertising or subscriptions, is the retro-future of local news. If so, Dauben will be the one buying ink by the barrel.
Mike Orren is the founder of Pegasus News. Write to [email protected].