After graduating from Booker T. Washington High School for the Performing and Visual Arts, Chris Arnold set out for Ohio to attend the Columbus College of Art and Design. Armed with his sketch pads, straight jeans, and jazz CDs, the preppy kid was eager to meet his new roommate. Then he saw Jeff Garrison, a long-haired hippie wearing bell bottoms and a rock concert t-shirt.

Arnold wasn’t impressed. Neither was Garrison. He couldn’t help but stare at the kid from Dallas in his penny loafers and tucked-in shirt. “He’s not an artist,” Garrison thought. “This isn’t going to work.”

Twenty-six years later, Arnold now has the long hair, and Garrison hardly has any (except on his chin). And, as it happens, it did work. After graduation, they moved to Dallas and formed Eyecon, a company whose large-scale murals you’ve likely seen on buildings around town. Their studio in Oak Cliff displays almost two decades of projects. Models and photos of projects line the walls, papers with sketches clutter the shelves, and splattered paint is everywhere. Their projects over the years have included things as minute as painting ivy on bathroom walls to creating grandiose scenes in McMansion theaters and iconic murals on parking garages.

So much for first impressions. 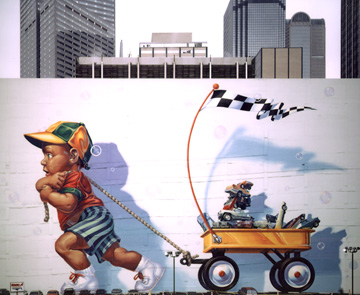 Mass Transit was Eyecon’s first big mural. the downtown improvement district Committee held a competition for artists to paint a mural on the Renaissance Tower parking garage. The piece could be anything, but it had to illustrate the tag line “Transportation.” The committee looked everywhere for talent­—except in Dallas. Then one of the board members, who happened to be the arts coordinator at Booker T. Washington, spoke up and said, “I know a guy.” She contacted Arnold. Eyecon applied to the competition and won.

Today, the mural, which portrays a 100-foot-tall toddler and cars that are larger than life-size, is mostly covered up. Garrison misses the obscured work.

“We thought it would be something out of the ordinary to have this giant toddler pulling a wagon full of cars,” he says. “At that time, DART was brand new. They were building the line through downtown. That’s why the wagon is yellow. I happened to have a 6-month-old in the house. He became a great model, but we didn’t want it necessarily to be about my son, James. We wanted it to be Dallas’ child. We altered the skin tones, and we put a hat on him so you don’t see any hair. You don’t know if he’s blond, has curly hair, whatever. During the process, we got to meet a lot of people. We came across just about every race, and they would pull out pictures. It could be an African-American baby girl, Hispanic, or white. They just all loved it and connected to it being a baby.”

“It was whimsical,” Arnold says. “We were trying to brighten people’s day. The coolest thing about the kid was not only that it was gender neutral, but it was race neutral. People kept—surprisingly, almost irritatingly—saying, ‘What is it? Is it a black kid? Is it a white kid? Is it a Hispanic kid?’ It’s a kid. That’s not what it’s about. That’s why we mixed the dark with the light and the reflecting skin tones. We mixed everyone up. Nobody knew, which is exactly what we were hoping for.” 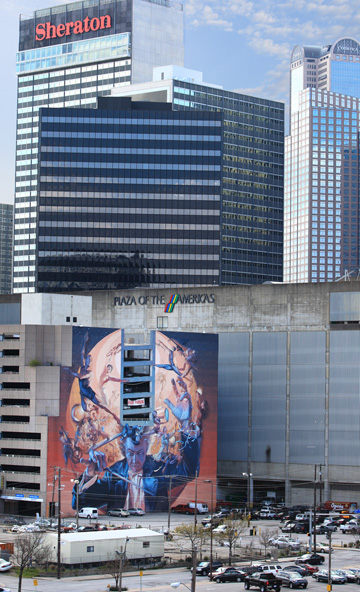 The Storm was the result of another competition through the Downtown Improvement District that Eyecon won. The piece portrays about 40 local artists trying to make it in the industry. The mural overlooks Dallas’ Arts District (walk down the staircase at the Winspear Opera House, and you’ll get a straight shot of the piece).

“The title of The Storm is a metaphor for the creative process,” Arnold says. “The storm gathers when you have an assignment or a piece you want to execute. You get into this tumultuous state of mind. Staring at that blank canvas, anxiety mounts up, and then it starts clicking, and that’s the center of the storm. That’s where we get this passion, this fire swirling.”

“Since one of the key buildings in the area is the Meyerson—and at that time, besides the DMA, was the premier building—we took a few nods from that,” Garrison says. “The conductor is conducting the arts, not just the music. The sphere behind him was taken off some of the architecture from the Meyerson. We gave subtle nods toward that property. In this case, the maestro is turned toward the viewer, which is unusual because usually you see the back of his head.”

“The conductor was actually my dad. He was totally blown away by the idea,” Arnold says. “He fit the bill because all the people represented are local, and they’re people who were currently practicing their craft. Dad’s been a music teacher [his home school is Leslie A. Stemmons Elementary School] his whole life and a conductor. He was really excited about all those aspects. The only thing he wasn’t crazy about was the rendering we had of his giant hair flying around in the air. My dad had the tux and he had the baton, but he didn’t have the hair. So we did photo sessions with him. I put his tux on and posed like him, and we blew my hair up with a fan. It’s him from the eyebrows down and me from the eyebrows up. He wasn’t really thrilled with that look until the very end. He was coming out pretty much every day, took pictures, and checked up on us. He adopted it like a lot of people did. He wasn’t on board with it until one day he was recognized by a passerby. Then he took ownership of it.” 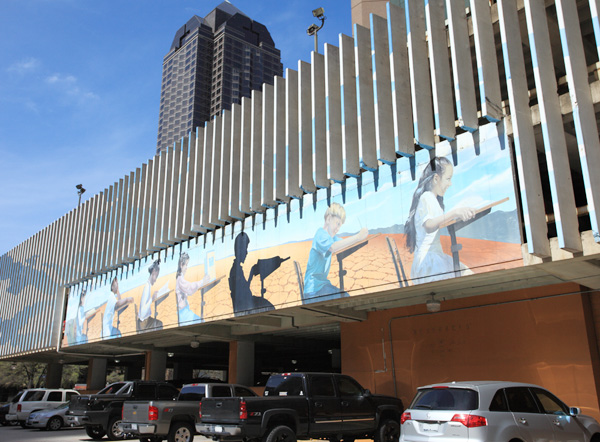 In 1995, Garrison and Arnold were working with Kathryn and Craig Hall on a piece. Although that piece never came to fruition, another one did. A garage on the footprint of the Cotton Exchange had a rather ugly facade. So the Halls asked Eyecon to do something about it. The artists answered with Resources.

“We came up with this idea with these kids,” Garrison says. “They’re juxtaposed in front of this barren landscape, a dry lake bed. They seem to be unaware or unaffected by it. They’re looking forward at the teacher, for the most part, except there’s a silhouette of one of the children, which represents one of the kids who fell through the cracks. We wanted to use these big fins above the painting, but we couldn’t figure out how to incorporate them and keep within their budget. We realized by painting just on the front of the 3-inch face of these fins, that you get this really interesting kinetic effect.”

“As you drive up on it, you can see the image and then it disappears,” Arnold says. “It portrays the elusive problems of education.”

“John Wiley Price was up in arms about the black male who’s daydreaming,” Garrison says. “They said we presented him like he was slacking because he was daydreaming. We took an entire class and sat them at desks individually and took photos of each one and asked them to do different poses. With him, I clearly remember saying, ‘Think about something that you’re dreaming like you really want to be.’ At the time, he wanted to be a Dallas Cowboy. He was dreaming of being Michael Irvin. And so we thought, ‘That’s inspiration.’ ”

“Maybe we were guilty of being naive of public perception,” Arnold says. “To me, there was no stereotype involved. People see what they want to see. It’s by far our most metaphorical mural. I remember my grandmother looking at that piece and saying, ‘That’s pretty.’ She had no idea what it meant. Had no clue. She thought it worked on a bunch of levels. A lot of our stuff, people just get. It’s very illustrative, allegorical, and pretty. This one worked on a couple different levels. If you got it, that’s great. If not, my grandmother thought it was pretty.” 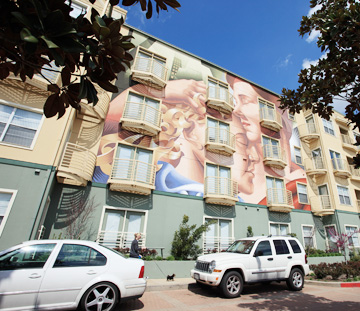 After the old Dr Pepper headquarters was torn down on the corner of Mockingbird Lane and Greenville Avenue, there was an outcry in the architecture community. The building was a great example of art deco, and people wanted to ensure that the character remained. So the deed for the land indicated the new properties had to contain some element of art deco. One architect had an idea. Phoenix Midtown, an apartment complex that had been built on the corner, was falling apart. It had to be fixed. So architect Paul Chapel proposed using Eyecon to paint giant art deco scenes on the exterior of the building. Arnold couldn’t have been happier. His dream was to do art deco on a large scale.

The result is seven images depicting urban life and an architectural frieze wrapping around the building. But the artists needed models for these images. Some were easy. The image titled Embrace is Arnold and his wife, Kim. And other models, like the one used for the businessman, literally showed up on Eyecon’s doorstep.

“We were seeking models,” Garrison says. “One day, the doorbell rings, and it’s this guy, our UPS guy. Chris and I happened to come to the door at the same time, and we’re looking at him. ‘Have you ever modeled?’ we asked. We brought him in, and we did photo sessions. He brought his son. It was a cool experience. We had a small unveiling ceremony and invited all the models. He brought a girlfriend to the parking lot area and set it up to where he’s standing in front of his image. ‘That’s you,’ she said.”

“The images reflected the lifestyle,” Arnold says. “A girl working out. And then there’s Darryl, the UPS guy. He’s the businessman. We’ve become over the years more cognizant of the stereotypes we’re reflecting. The artists through time reflect the culture around them. I liked the fact that we could put Darryl, of all the figures, as the young corporate businessman. It’s not about race. He’s a young professional. He’s also a really good-looking guy.”