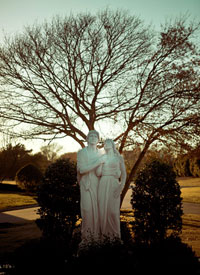 Since my first visit to Sparkman Hillcrest on Northwest Highway more than 15 years ago, I’ve felt surprisingly comfortable there. At 2 am, it’s peaceful. Clear and calm, with trees rustling in the quiet. At noon, it’s much the same, though brighter. I’ve visited when horribly grief stricken and after my grief had settled into the softer patterns of loss. Each time, I was comforted by the space, by the peacefulness. I attribute that, in part, to the people who live there, deep beneath the ground.

I like my father’s neighbors. The cemetery was created with land donated by William Barr Caruth, an early Dallas settler whose family owned huge tracts of what is now North Dallas. Sparkman Hillcrest is officially a Texas historic site now, with graves going back as far as the 1850s, and some of the wending roads through the 88 acres are lovely. There are lots of famous Dallas folks here: Mary Kay Ash is here and Mickey Mantle. Greer Garson and Tom Landry, too. But I think more about the people lying near my dad: the Churchills, for example, one of whom was Jack Whitney Churchill, 23, an aviation instructor who died in a fiery crash during WWII near Augusta, Georgia, far from the front.

Or Lovie M. Hirscher, born in 1897 and died in 1986. Her name on the tombstone is Lovie, the way my uncle’s grandmother was Honey. A different era, when women would introduce themselves with names I, with my feminist leanings, would chafe under. But for someone born in the 1890s, I find the name charming. And then there’s Baby. That’s all one grave site says, with a single day listed in 1918, a hard thing for me, at 37 weeks pregnant, to read. I rest my hand atop my belly and wonder if Lovie reaches out to Baby the way elderly women in the grocery store are drawn to touch my daughter’s hair.

I sometimes take my daughter to visit my father, her “grandpa under the grass,” as she calls him. She is 2, and the cemetery is a wonderful place for her. There are fields, there are sticks, there is next to no car traffic. We’re often the only people within earshot in the late afternoon, so there’s no one to disturb—except perhaps the dead. And the dead, legend has it, are pretty hard to rouse. (Then again, perhaps they do come out to play; perhaps they’re the ones who drop leaves in my daughter’s hair or blow the wind on her cheeks that makes her giggle.)

The cemetery is divided into sections with names such as the Fireman’s Rest, or Monument Garden E, where my dad is. And where Patrick Dennis Seals, died April 1, 1944, is. He was 22 when he was killed in a plane crash near Eagle Pass while in advanced training for the Army Air Forces. He’s buried in Arlington National Cemetery, but his memorial is at Sparkman, and my daughter and I are drawn to it. It’s a tall, white-columned remembrance, and its pillars, with their sharp right angles, beg to be touched. My daughter grips the columns and peers between them, looking at the letters carved deeply into stone. I like the narrow elegance of the memorial, the sacrifice and pride that run through its height—the rest of the Seals family graves have ordinary, flat headstones. And, of course, I am struck by airman Seals’ name. My father, also Dennis, also dead too young, was spared going to Vietnam because someone official looked at him—his wildly healthy young body—and sent him home. He married, had children, served the poor, kept his word, and died more than 20 years later, climbing rocks with sturdy legs.

On one bright, cold day just after the new year had started, people were out in the cemetery in larger numbers than I often see on my irregular visits. A single man, perhaps in his 40s, talking on his phone, standing near a grave. A couple over there, with flowers. A group, oh, perhaps seven of them standing around together, the women’s blow-dried hair crisscrossing their faces and probably sticking to their lipstick in the wind. I wondered if they were making difficult end-of-life decisions for someone, if they were trying to decide where their recently deceased loved one should live. Or perhaps the funeral was weeks or years ago and they were gathered now, at the holidays, to visit the grave together. Remembering sometimes works best when it is communal.

My daughter and I walked past a raw, new grave site, the dirt packed hard and cracked from the recent snows and thaws. It takes awhile for the grass to grow, for the “beautiful uncut hair of graves,” as Walt Whitman called it, to grow again. Words of Whitman’s popped in and out of my head as I watched the people, and later, at home, I looked up “Song of Myself” and read sections I haven’t in a long time:

They are alive and well somewhere;
The smallest sprout shows there is really no death;
And if ever there was, it led forward life, and does not wait at the end to arrest it,
And ceas’d the moment life appear’d.

All goes onward and outward—nothing collapses;
And to die is different from what any one supposed, and luckier. 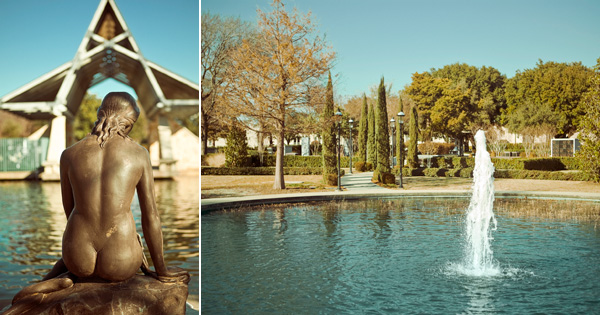 For years, I believed that language was the most important thing, that if I could get the words right, then everything would be right. When you speak to the dead, what you say matters. And it doesn’t. I say hello to my father’s neighbors, the people whose bones are joining with his to form the terroir, to shape the ground my daughter and I stand on. It only seems polite. We say their names and trace the letters on their graves, practice phonics.

And then, as her attention inevitably wanders to the wide expanse of space, to the tall oaks rustling, the glorious newness of her limbs and the sunlight distract her. Her bones are stronger every day. She cannot help running. She runs through the grass, Whitman’s mystical grass, with her solidly real legs and calls, “Chase me, Mommy!” No other person is close enough to hear her, no one living is close enough to disturb. And the dead, if they somehow live, well, I can only imagine that they, too, like a good game of chase.

I run toward her, as best I can, my swelling belly slowing my pursuit. “Chase, Mommy!” she says, and I catch the sound with my whole body.