If you want to know what raises the goose flesh on a group of video game developers—the kind of thing that triggers fist pumps and gasps of pleasure—sit in the daily “scrum” at Newtoy Inc., the small collective of code writers crammed into tight quarters in a converted flour mill on the outskirts of McKinney. If most of the gathered staff weren’t wearing flip-flops this mid-April day, their socks surely would be knocked off by engineer Vijay Thakkar’s ecstatic update on a game he’s tinkering with.

“This morning,” Thakkar reports with the cocksure eminence of an MIT researcher, “I hacked together some crazy magic mojo to reload the UIs and proto-datas, which are pretty f–kin’ cool. And I just did some first tests on UI auto-reload, sprites-sheets auto-reload, and proto-database auto-reload in the client, so, theoretically, you guys might never have to restart the game unless you pull down new code.”

“That,” a colleague says in almost devout admiration, “is spectacular.”

Leading the scrum, in front of a large flat-screen monitor that displays the charted progress on Newtoy’s secret next gaming project, is Paul Bettner, 32, the company’s co-founder. Bettner’s breezy manner and even more chill attire (cutoffs and a logo tee) can’t hide the fact that he’s squeezing the life out of a stress ball. But that’s about the only outward sign of pressure you’ll find at Newtoy—unless you mistake the overflowing garbage receptacles, half-eaten bagels, scattered open soda cans, and roll of duct tape for anything other than what happens when you throw a bunch of guys into a room together.

The truth is, these are high times at Newtoy. The young studio of nine employees is on a remarkable tear, with two of its three published games—games designed for the iPhone—currently ranked among the top grossing applications in the iTunes Store. Its newest release, We Rule, a simulation game modeled after the hugely successful Facebook time-sink FarmVille, was highlighted in early April as the online store’s “iPhone App of the Week” and is a money-printing hit. But the game that has made players of Newtoy and has infected American culture like a new super virus is an unapologetic Scrabble rip-off called Words With Friends.

Newtoy’s 25-year-old COO, Michael Chow, says Words With Friends has been downloaded 4.5 million times since its July 2009 release, with the average player jacked into the game an hour and a half each day. “It is,” Chow says, “a very sticky platform.” The genius of the game—and the reason Newtoy started with iPhone apps when the company launched in September 2008—is the way in which the new technology allows you to play.

Paul is more lucid on the subject, which is a joke between the brothers. He is the C-student dropout whose innate enthusiasm and intelligence (he began programming when he was 8) make him the company’s natural spokesman and leader; David is the straight-A college grad with the punk attitude and age-inappropriate asides.

“The iPhone,” Paul explains, “allows for a type of gaming that couldn’t exist before. It has tons of unique characteristics, like the touch screen and the fact that it’s always with you. But the most important thing is that it’s always connected.”

What that means vis-à-vis Words With Friends—and Newtoy’s first app foray, Chess With Friends—is the ability to play games wirelessly across great distances but without the kind of “appointment gaming” requirements, Ethernet cables, and internet connections of earlier networked experiences like the PC blockbusters Doom and World of Warcraft. In other words, you don’t have to be at home to play, and you don’t even have to be playing the game at the same time as your opponent. The Bettners call it “asynchronous, turn-based gaming,” but it’s not nearly as daunting as it sounds. 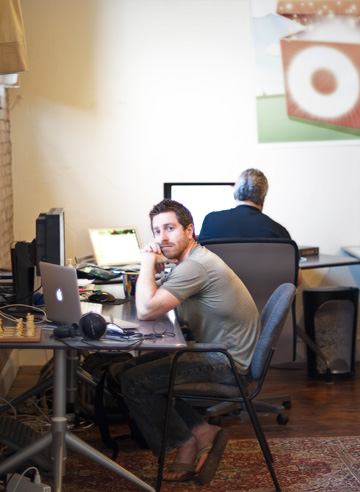 David Bettner at work. photography by Elizabeth Lavin
photography by Elizabeth Lavin
In fact, it’s liberatingly simple. If, by playing the first word, someone initiates a Words With Friends match with, say, a relative on the other side of the country, that relative will have a replica of the game board appear on his own iPhone and be free to take his turn in the game—to play a word of his making—at his leisure. This back-and-forth volley of “quiet” and “taxi” and “qi” goes on until the game is complete, which, depending on your school workload or the tonnage of laundry in your hamper, might take two hours or two weeks. Users can juggle up to 20 games at a time. And, of course, there’s in-game text messaging. By very precise design, Words With Friends has become a casual and playful way for millions of people to stay connected through an infectious game, whether it’s long distance or with a co-worker in the next cubicle. Even with the starting pitcher at the end of the dugout.

“Anytime you’ve got downtime, it’s something to keep your mind occupied, and it’s another way to talk trash when you get the opportunity,” says Michael Young, standing in front of his locker in the Texas Rangers clubhouse. Young is one of a dozen or so Rangers obsessed with Words With Friends—and one of the 400,000 Dallas-area residents who, Newtoy estimates, are similarly fixated. By most accounts, it got started for the Rangers in spring training, with pitcher and Scrabble fan Brandon McCarthy, and quickly spread to the dexterous thumbs of Young, C.J. Wilson, Darren O’Day, David Murphy, Taylor Teagarden, even general manager Jon Daniels. Daniels demoted McCarthy to Triple A as the regular season began. Was he just too formidable a Words With Friends competitor? “No, that’s an absolute fallacy,” says Young in mock seriousness. “By the way, the word ‘fallacy’ would probably be worth about 18 points.”

O’Day and Young say there is no clear-cut Words ace in the clubhouse. “Although,” O’Day says, pointing down the row of lockers, “I’m sure there’s someone who’ll tell you he is.”

“I was a writing major, so words are just another form of math to me,” says Wilson, who the night before beat the Red Sox in Fenway Park to earn his first Major League victory as a starting pitcher. “On Words With Friends, I’m in the 400- to 500-point range every game, so I’m pretty good. I try to feel out the guy I’m playing and get a gauge if he’s gonna be a strategy player or a run-and-gun guy. If he’s a run-and-gun guy, I’m gonna beat him 100 percent of the time because I can choke him. I can choke the board.”

Does he know that there are 99 legitimate two-letter words that can be played in the game? “I probably know 85 of those,” he says. “I mean, literally.” Then he pauses. “But there are 99, though?”