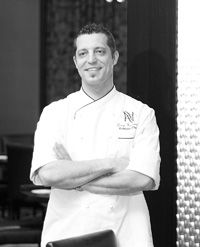 Chef Luigi Iannuario. photography by Kevin Marple
photography by Kevin Marple
We slide into a beige, button-tufted, semicircular booth in the front of the dining room. The table is set for six, but the four of us want to sit shoulder to shoulder, so we each have a view. The floor show is in full swing. Waiters hold plates high over their heads and weave through the crowd like spinning tops. “Oh, no!” we gasp as a server bumps a gentleman in a wheelchair. A few minutes later, a generously served silver-haired man with a walker attempts to navigate a route back to his table. “Come on, buddy, you can make it!” we cheer as he almost slips on the slick wooden floor. We hold our breath as he clears a row of banquettes and takes a wide left turn. After he reaches his destination, we turn our attention to the table next to ours just in time to witness an elderly man drain his cocktail, wipe his mouth, and reinsert the plastic nasal cannula fed by his oxygen tank.

People-watching at Ristorante Nicola, near Preston Center, may be the best in town. The scene is a Dallas version of the movie Cocoon—only here the old people are drinking the magic water instead of swimming in it. As the cocktails flow, the patrons grow younger and more energized. Men wearing dreadful comb-overs and pastel short-sleeved shirts tucked into khakis gather around well-manicured matrons. We stare in awe as somebody’s grandmother calls her group to attention. “Watch how many olives I can get in my mouth at one time,” she says, sticking her red-tipped fingers into their martinis and slipping the olives past her lips. Her friends roar with laughter. Recession? Depression? Incontinence? Not here.

Before you send me a nasty letter for making light of the elderly, hear me out. I’m a card-carrying member of AARP. I’m closer to 60 than 50. I wear hand braces to type, peruse catalogs for arthritis-friendly clothing, and take Silver Shoes yoga classes. But a fact is a fact: all three times I visited the new Ristorante Nicola, the dining room was filled with people over 60 years old. 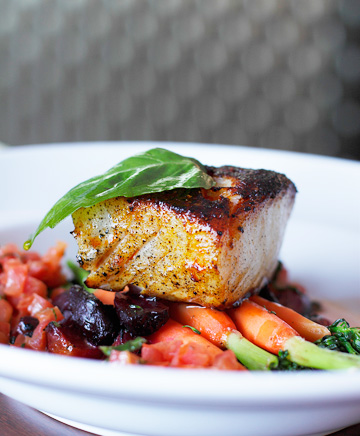 Sea bass with root vegetables. photography by Kevin Marple
photography by Kevin Marple
Perhaps that was the intention of owner Richard Gussoni, who also owns Nicola’s Ristorante Italiano and Coast Global Seafood in Plano, and Frosted Art Bakery & Studio in Dallas. Gussoni’s portfolio also includes Culinaire, the enormous food and beverage corporation headquartered in Dallas. Culinaire’s website states: “Our strategic plan calls for continued penetration in the hospitality industry as well as country clubs, botanical gardens, retirement communities, and museums.” If Ristorante Nicola is a prototype for a restaurant in a retirement home, sign me up—at least for the bar side of the offerings.

The food at Nicola, on the other hand, is palate-friendly, which is a polite way of saying most of the flavors have been dumbed down to appeal to the widest possible range of diners. What is billed as “authentic, handcrafted Italian cuisine” made from “old-world recipes handed down through centuries of Italian cookery” is actually what I like to call Highland Park Italian. It’s fancy, but the closer you look, the less you taste. Regal-sounding scaloppine di vitello al funghi e Marsala is actually an uninspired plate of thinly sliced veal covered with thick mushroom gravy—excuse me, reduction sauce. Certainly not worth the $23 price tag.

Chef Luigi Iannuario’s menu does offer a few dishes worth a fresh tube of Fixodent. All of the pastas are made daily in the huge exhibition kitchen that runs along the back and side wall of the restaurant. The menu claims they form organic semolina flour into “artisan shapes and styles.” And on that promise, they make good. Deliciously al dente fusilli spaccati is tossed with medium-sized shrimp, sun-dried tomato, strips of arugula, and mixed with a light mascarpone and white wine sauce. The long pasta curls inward and holds the sauce like water clings to a leaf, ensuring an even distribution of sauce in each bite. The same goes for the bucatini all’amatriciana. A long, hollow pipe of spaghetti traps the tomato sauce inside. The pasta is simply decorated with pancetta and shaved Parmigiano-Reggiano cheese. 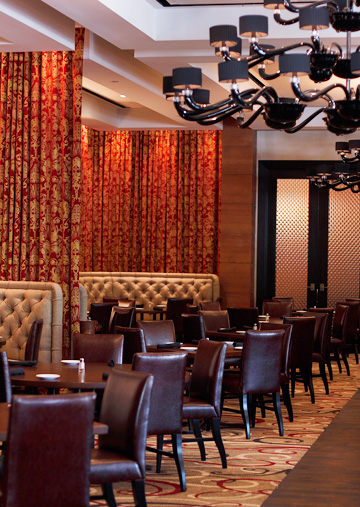 One serving of lasagnetta is enough for two. (Four if you are over 70.) Three sheets of pasta are layered 2 inches high with cheese, artichoke hearts, and chicken before the behemoth is covered with tomato sauce and a fat strip of melting Parmesan cheese. Unlike so many other Italian restaurants, Nicola serves its version of lasagna bubbling hot. It cleaves  into individual bites at the touch of a fork, but the flavor of the squashy artichokes and stringy chicken is masked by the tomato sauce. I dissected the leftovers the next day and discovered no traces of herb or spice or sauce between the layers of pasta.

Also bland is a very busy platter of antipasti—though for $13, it does deliver a lot of protein. Thin slices of mortadello, prosciutto, and salami are piled on top of marinated peppers, eggplant, cauliflower, olives, and fava beans. The cheeses on the platter change daily. On our visit, thick strips of pecorino and bocconcini (small balls of soft mozzarella) and a wedge of frittata with fontina sat to the side of hubcap-sized platter. Not so much of a bargain, but more satisfying as an appetizer or bar snack, is the crispy, hot flat bread ($9) topped with toasted pine nuts, slices of tomato, garlic, basil, and pecorino. It goes great with a glass of Chianti if you’re on a budget or a bottle of Brunello if you’re splurging.

Popping corks suggest most of the customers are splurging. The wine list strikes a good balance between exotic bottles for aficionados and more common vintages for casual wine drinkers. Produttori Barbaresco “Torre,” Piemonte, ’05 ($85) is made by a cooperative, but it is a solid red wine. Ceretto Arneis, Piemonte, ’08 ($45) is an indigenous white grape that attracts wine geeks, and the price makes it accessible to anyone willing to stray away from Far Niente Chardonnay ($110).

The safest bet for satisfaction under the Secondi section of the menu is the sliced strip loin—excuse me, the tagliata di manzo. A salad comprising two fists of arugula and endive mixed with white beans, pancetta, and shaved pecorino and tossed with lemon-rosemary vinaigrette is lined with medium-rare slices of strip loin. Once again, it’s enough for two and sure to satisfy the conservative steak lover as well as those who have traveled to Tuscany.

The desserts are as drab as the decor. The dense pastry filled with ice cream in Nicola’s version of profiteroles turns pasty in the mouth. Even the thin layer of Belgian chocolate on the plate doesn’t make them palatable. Ditto for the tiramisu. The sponge cake is watery, not with coffee or rum but an unidentified liquid. Overall, the mushy dessert doesn’t deliver any “carry me up” flavor.

Several of my dining companions do not agree with my opinion of Ristorante Nicola’s interior design. They feel right at home surrounded by the beige-y gold walls of the dining room, which are accented with floor-to-ceiling gold and red floral patterned drapes. The beige carpet has swirls of brown, white, and burgundy. Four enormous black chandeliers hang like tarantulas from the ceiling. The pre-opening press materials described them as “hand-blown, black Murano glass,” but that makes them sound glamorous. I find them a bit scary.

The outdoor patio seats 44 and is sure to be a big hit this summer. The only thing missing is a shuffleboard court on the outer deck. Perhaps Culinaire will work one into the  plans when they get started on that retirement home.