The big sign out front needed attention. Red neon tubes had burned out, killing the “R” and slicing the top off the “O,” so that it read “Mesquite udeo.” Really, it seemed appropriate. If you want something big and slick and picture-book perfect, head out to the football temple in Arlington. It’ll cost you $40 to park your car. The rodeo’s different. They’re still using neon, for goodness’ sake. And parking costs $10.

The last time I’d been out to the rodeo? I couldn’t exactly recall. The place, for me, still exists in the late ’70s and early ’80s, when my grandfather would round up the whole family every summer and take us out to Mesquite. This was when the rodeo was held in the original 3,700-seat arena, built in 1958. It had a roof but was otherwise open to the elements, which meant oppressive heat. I’d sit on a wooden bench in the grandstands, sweating, waiting for the point in every evening’s program when the kids were invited down onto the dirt to chase a calf with a ribbon tied to its tail. My cousins and I, along with maybe 100 other kids, would line up on one end of the arena, and the calf would enter from the other. Then all hell would break loose—the parents screaming in the stands, the panicked calf running for its life, the kids shoving each other, throwing elbows, stepping on the bodies of those who’d fallen. I think the kid who got the ribbon won a free trip to the snack bar, a prize definitely worth risking your life for. 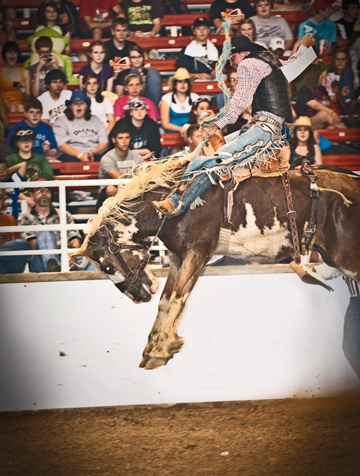 This year the arena will host about 60 events, including the rodeos, which start this month and run through August. photography by Elizabeth Lavin
photography by Elizabeth Lavin
Things have changed since then. The Mesquite Championship Rodeo moved into a new 5,300-seat arena a couple hundred yards away from the old one in 1986. They even enclosed and air conditioned it in 1998. Maybe the biggest change came last year, though, when a new ownership group took over. They renovated the suites and installed two jumbo video boards that cost about $1 million. So in March I took my family out for a Professional Bull Riders event to see the place for the first time in more than a decade.

“Come on! Get your hands together,” the PA announcer said. “It’s a great night for bull riding in Mesquite, Texas.”

It was, too. Cord McCoy, of Amazing Race fame, was competing. According to my notes, he posted a score of 84.5 points on one ride, but, for me, the scoring was irrelevant. It was just amazing to watch men try to ride a spinning, kicking, intensely irritated animal that weighs almost 2,000 pounds. I can remember thinking the same thing as a kid: “These people are stupid.” I mean that in the most reverent sense possible. One ride left a cowboy motionless in the dirt. When the medical staff eventually helped him to his feet and he limped off, I had to fight back tears. It was touching that a guy would put himself through that kind of pain for my family’s entertainment. And we got to watch his fall in slow motion, repeatedly, on those handsome new video boards, a great improvement over the rodeo I remember from childhood.

I went for some treats for my kids at intermission. The guy standing in line in front of me had a utility knife clipped to his front jeans pocket, and he was using an empty Dasani water bottle as a dip spit receptacle. The woman running the snow cone concession under the grandstands told me she’d worked at the rodeo for three years but had never once seen the actual rodeo. “I just stand here all night with my back to it,” she said. She was bemused, not complaining. And when she handed me my change, she said, “Thank you, sir,” with a genuine politeness that you don’t often find from folks in the concessions business. Two snow cones and a bottle of water cost $7.50.

A few weeks later, I returned to Resistol Arena to meet two of its owners, Mike McCall and James Petty. We sat in a sparsely decorated upstairs conference room. I told them how much fun we’d had and that I was particularly impressed with their employees and the prices at the arena. McCall’s face lit up.

“That’s the thing,” he said. “When we bought the place, we were surprised to see how long a lot of the staff had worked here. They’re great people. And one of the first things we did was lower the prices on concessions.” A beer is $5, a soda $2.50, and the cheapest hot dog $2.50.

McCall was the more talkative of the two. He was the founding president and general manager of the Frisco RoughRiders, and before that, he did sales and marketing for the New Jersey Devils. He still had some East Coast in him. Petty hailed from Arkansas. He wore a thick, white handlebar mustache and a cowboy hat. The two met when Petty sold his wire and cable business to his son and, almost by accident, became the mounted, red chaps-wearing RoughRiders mascot (named, rather prosaically, The Rider). When the rodeo came up for sale, McCall and Petty put together an eight-member ownership group, called Camelot Sports and Entertainment, that includes the Mavericks’ Donnie Nelson and Jack Matthews, whose Matthews Southwest is developing the Dallas Convention Center’s new hotel.

McCall talked with zeal about what Camelot has done with the arena—and what it plans to do. Hicks Sports Group had owned the arena for a decade, but the rodeo had always taken a backseat to Tom Hicks’ other sports holdings, the Stars and Rangers. And when Hicks’ finances grew shaky, the rodeo really got neglected. A few years ago, only 40 cowboys showed up for an event. Last December, at the first rodeo ever held during the Christmas holidays, 424 cowboys came.

That’s one part of their strategy, giving the cowboys what they want. The season ends in mid-December, with the National Finals Rodeo in Las Vegas. Cowboys can then immediately start earning points to qualify for next year’s NFR, but no one in the country had ever thought to have a rodeo over the Christmas break, when all the cowboys are home­—which, for a lot of cowboys, happens to be not far from Mesquite.

McCall and Petty’s business plan also calls for filling up Resistol Arena almost any way they can. This year the arena will host about 60 events, including the rodeos, which start this month and run through August. Dwight Yoakam played Resistol in February. Jack Ingram is coming in July. Resistol is hosting all-day Hispanic rodeos and Arenacross motorcycle racing. Arena Racing­ is coming soon (think NASCAR on a much smaller scale, with diminutive stock cars doing 55 mph around a portable track with banked turns). And, yes, there will be Mexican wrestling.

All of it, McCall insisted, will be affordable. In the conference room, he produced a chart comparing Resistol’s executive suites—he called them “luxury suites,” then corrected himself—with suites at other venues. At Cowboys Stadium, you get 18 tickets to 10 events for $250,000. But that doesn’t include food and beverage. Figure another $50,000. You wind up spending about $30,000 per event. Even at Dr Pepper Ballpark, a suite will run you $49,000 for 20 tickets to 71 events, or about $1,190 per event. At Resistol, a suite with 10 tickets to 50 events costs $35,000, including food and beverage. That’s about $700 per event. If a luxury—um—executive suite isn’t your speed, the cheapest grandstand seat runs $7 for an adult and $6 for a kid.

We were sitting in one of those suites, looking down at the empty arena, when McCall told me the best part. They’re still pitting wild children against calves in Mesquite. Winner gets 20 bucks and a t-shirt.