He’s 6-foot-3 from his comfortable shoes to the top of his head, and he is not happy. Chef William Koval glares over reading glasses at the moving lips of a waitress and then at what the waitress is holding—a steak on a plate. Said bistecca, which moments before left the kitchen hot, medium rare, and delicately seasoned, has boomeranged back. It’s too something or not enough something else, murmurs the young woman in a black uniform. Plates clatter, oil sizzles in iron pans, loud voices ask, “Where’s the ginger?” and, “Who has table three?” while Koval, a perfectionist in a make-do world, says nothing for a long second or two. Then he makes another steak.

Outside this hot, noisy room where veal gets piccata’d and potatoes au gratined, patrons sit in four separate dining areas. There will be about 200 diners tonight, making this one of the busiest a la carte restaurants in Dallas. Only it’s not a restaurant. Six cobalt-colored tennis courts and 130 acres of golf course doze in the twilight outside; this is Lakewood Country Club. You know the country club: marble floors, thick carpets, bad food. It’s a bit odd to find Koval cooking here. He’s known all over the world, particularly for his 12-year tenure at the French Room, which ended in 2005. The iconic eatery at the Hotel Adolphus had been in a slump but returned to excellence under Koval; Zagat named it the top hotel restaurant in the United States. The rating game is everything in Food World, but Zagat and Michelin and Triple-A do not come calling at the golf course.

Perhaps the correct simile for this state of affairs comes from sports: Koval at a country club is like Dirk Nowitzki suiting up for Dallas Baptist.

Perhaps not. Koval does not agree with the premise behind most of my observations. For example, I marveled at the taste of the little lamb I had in his kitchen and boggled at the logistics of Easter brunch for 800. “It’s not rocket science,” he said. I thought aloud that it would be interesting to follow him to the farmers market and watch him select the tomatoes and tarragon that might find their way onto that night’s menu. “That’s TV,” he said. Lakewood buys tomatoes and tarragon by the truckload. He’s thin and looks fit. What about that old saw about not trusting a skinny chef? “Never trust a fat chef,” Koval replied. “He’s eating your profits.” (The chef works out. He once dead-lifted 501 pounds, two and a half times his body weight. Now he’s into P90X, the workout regimen from the infomercials.) And I posited that he must feel hidden away at Lakewood, that he must miss the limelight. “The only thing notoriety ever got me was distrust of notoriety,” he said. The man speaks in zingers. 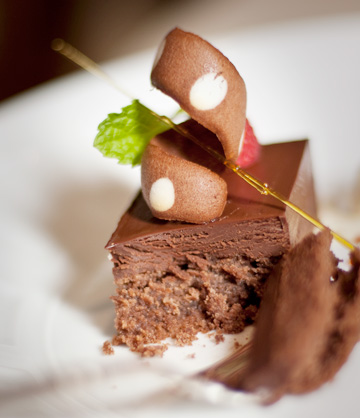 Lakewood Country Club will mark its 100th anniversary in 2012, and as part of its commemoration of the achievement, the club hired me to write its history. My research has found that the friendly course in East Dallas has its unique aspects, but in an important way it is identical to any pre-1930 course that still opens its doors: it survived the Depression. Improvisation was the key to staying alive for Lakewood—improvisation and the best slot machines in town. Now a turgid economy has the industry reeling again. Jack Nicklaus, the golf champion turned course architect, observed recently that less than one half of one percent of his company’s 2009 business came from domestic projects. Meanwhile, Jack’s got thirtysomething courses going in China. Tiger’s impact on the business of golf has been mixed, at best. Since his debut on the world stage 15 years ago, the best player in the world has attracted new players to the game, but they do not stay. Thus golf in the United States has falling participation rates and, for the first time in a very long time, more courses closing than opening.

Dallas has lost a handful, most notably Columbian Country Club. But the top tier—Brook Hollow, Northwood, Royal Oaks, Dallas Country Club, and Lakewood—have reacted to the crisis by spending money as if it had been sent from Washington. New, more luxurious pro shops, and rooms for dining, fitness, and bathing have been appended to their clubhouses, and vast green has been invested in the vast green of the courses themselves. Lakewood built a kitchen for more than $1 million and cast about for someone suitable to put in it. “I wonder what William Koval is doing,” said Ray DeTullio, the club’s general manager, at a meeting in 2007. Lucian LaBarba—a member at the club, president of FreshPoint Dallas, and  a person who knows everyone in the business—started scrolling through his phone. “I’ll find out,” he said.

Koval took his old friend’s call while standing in a Noble House kitchen in Seattle, and while thinking how much he hated the moist facts of life in the Emerald City. “It had rained 37 days straight,” he recalls, his hard consonants reminding you of his youth in the Northeast. “I was whiter than this tablecloth. And I was already talking to the Driskill Hotel in Austin. It has the same reputation as the Adolphus. I could get my butt back in the high end.”

That this man would be in demand at the top of the food prep chain was not foretold by the steady stream of Ds on his high school report card, nor by the cooking jobs he’d held early in his life: the Uxbridge, Massachusetts, Elks Lodge; Bonanza Steakhouse; Arthur Treacher’s Fish and Chips; and a senior citizens’ home where he was required to stretch 1 pound of ground beef into an entrée for 100 (blending in 5 pounds of oatmeal did the trick). An even greater miracle occurred when his father and the dean of Holy Cross High School in Waterbury, Connecticut, got him admitted to the top cooking school in the world, the Culinary Institute of America, in Hyde Park, New York. He flunked his first class, Product Identification—young William couldn’t tell an artichoke from a Vidalia onion—but something at CIA clicked. Despite the F, he finished almost at the top of his class. His strengths were revealed: an uncompromising attitude regarding the food and a tireless style that makes a worker bee look lazy.

“I peel potatoes and clean out freezers,” he says. “I break down fish and beef. No one in the kitchen can say, ‘I’m not gonna do that because he doesn’t do that.’”

After the Ritz-Carlton made him its youngest-ever executive chef, Koval made his bones at the French Room. During his tenure overseeing four restaurants and room service at the Adolphus, he cooked something twice a month on Channel 8’s morning show. “William wasn’t shy on TV, but he might be shy about his talent,” says Gary Cogill, the long-time Good Morning Texas performer. “Some chefs think they’re rock stars, but he never acted like that. His food’s as good as Dean Fearing’s or Stephan Pyles’, but he isn’t as media savvy. I can’t believe he’s at Lakewood. Every time I drive by there, I just giggle.”

Four times Koval rejected LaBarba’s invitation to interview at Lakewood. (“Chefs who can’t cook go to country clubs to die,” Koval says. Zing!) But Lakewood GM DeTullio was able to convince the chef—since he was going to Austin to talk to the Driskill Hotel management anyway—to at least come by Lakewood to meet the people and see the facility. Koval discovered a lot of reasons not to take the job. Country clubs have kids, and kids want mac and cheese, and golfers often just want a burger and beer après golf, and the North Star on the Lakewood menu is a dish called the Arkansas Traveler—shaved beef, black-eyed peas, cornbread, and canned gravy on mashed potatoes. On the other hand, although the Lakewooders apparently really cared about food, there would be no menu committee recommending Asian fusion falafel this month and pad Thai Provençal the next. He could, in other words, cook what he wanted. And then there was that kitchen, with its array of electric infusion burners and walk-in freezers for produce, dairy, and sauces; and an eight-table fine dining area called the Wine Room.

Koval sent his regrets to the Driskill. He found a house in Midlothian, because one of his kids goes to school there—he’s estranged from his wife—and because he doesn’t seem to give a fig about anything but them and preparing great food. He fired most of the kitchen staff hired by his predecessor. “Am I easy to work for? No,” he says.

But he is a happy man, an artist free to create what he wants. He recently wanted truffles, the pricey fungi from France, because they add an intriguing element to pasta. So he ordered $3,000 worth. That would be a great story for his diners, but only lately has Koval ventured out of the kitchen to do that “How was your dinner?” thing. He knows people like a little schmooze but thinks they like him making sure every plate is perfect even more.

What is the takeaway from this? Does Koval at Lakewood augur a new era in which country clubs are as much or more about eating than golf or tennis, and the best restaurant in town is one that requires a $50,000 initiation fee? Or maybe this chef and this club are merely an aberration, a perfect storm of an ambitious club and a food maestro who really likes Dallas. “I plan to do with Lakewood what I did with the Adolphus,” Koval says, and maybe he will. Just as long as the Arkansas Traveler is still topped with canned gravy. That’s the one thing he’s forbidden to change.