We pulled up the sun. My husband and I, on a Friday night date, pulled up the sun. The sun was setting when we stepped into elevator A at Reunion Tower, the expected orange fire reflecting through downtown. With each floor we climbed, our perspective shifted. The sun seemed to rise higher. From our rising vantage point, it was no longer setting. The higher we flew, the more sunlight came back, as if we were Apollonian demigods, charioting the sun upward and changing time.

And that was before we got a drink.

Reunion Tower is a dandelion of a building, a dome of white lights beckoning like wishes. Built in 1978, it’s an icon of downtown, the southern tip of a famous skyline, the last great structure before the sky breaks open into endless blue. It’s also home to Wolfgang Puck’s $23 million renovation of the old Antares bar and restaurant, now named Five Sixty (for the height, in feet, of its perch).

Puck, as everyone who’s ever watched the Food Network knows, is the multitalented restaurateur behind everything from L.A.’s Spago to frozen food. He’s got a nose for success­—and Five Sixty was hopping the other night at about 8. The crowd looked like a mix of tourists and locals; the locals appeared to be in the majority. Both groups seemed camera happy (think birthdays and travel photos). Twentysomethings in heels and, despite the request for business casual dress, young men in expensive jeans filled the sofas in the bar/lounge, while patrons of numerous shapes and ages were seated in the restaurant.

A return trip at happy hour one Wednesday seemed to have more people conducting business, chatting about products and sales, rather than Friday night fun. A handful of women looked like they were having a lovely girls night out. Perhaps they were taking advantage of happy hour specials. The happy hour, by the way, runs from 5 to 7, Monday through Friday, and a few beer and wine selections cost only $5.60. Five appetizers—the choices vary—are also $5.60. (The Kobe beef, ginger, and fried jalapeño sliders were Mike Tyson knockout good, and their very existence was a surprise since the restaurant focuses primarily on seafood and sushi.)

My husband and I sat at the white-lit bar in the lounge, watched the sleek hostesses cross the rough black rocks comprising the floor, their high, high heels clicking confidently against the slightly uneven surface. Approximately 8 gazillion wine bottles are shown off in a wine refrigerator that wraps around the restaurant’s wide cylindrical core. It’s a gorgeous display of viniosity that reminded me of the metal ball from an IBM Selectric typewriter. 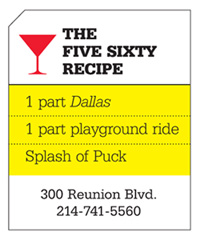 Round is important at Five Sixty. Both the lounge and the restaurant are divided into two parts—the still and the moving. The center holds still; the wide outer ring moves. Slowly, inevitably, the outer ring moves. The kitchen, the hostess stand, and one bar are terra firma; the tables, seats, and majority of the patrons revolve, getting a 360-degree look at the city. It took about an hour for us to get all the way back to where we started. “This would make a great first date bar,” a friend said over a $14 Thai Chile Mangotini. “You could have one revolution and then head out if it wasn’t going well.” (And dinner if it is.)

It was strange to sit, $13 Perfect Bourbon Sidecar in hand, talking to my husband, and realize that the bathrooms were no longer behind me. The bar with its carefully chosen bottles, the TVs with basketball games, my husband’s long, familiar fingers wrapped around his beer—these were still and steady. But the world behind and in front of me was moving.

Zeno, the ancient Greek, had a couple of paradoxes about motion. One about Achilles and the tortoise, another called dichotomy. My favorite is the arrow paradox, where he asserts that nothing moves. The gist of it is this: if life is made up of instants, and an instant is a unit of time such that nothing in it is moving (think photograph), then nothing ever moves. In Zeno’s world, everything is still and at motion at once.

On our way back down from the tower, I leaned into my husband, watched as the clouds grew farther and streets closer. We held still and moved rapidly toward the ground, leaving the stars to rise and set as they wished.