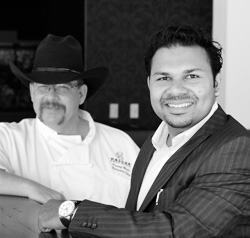 Chef Kenny Mills and owner Mike Hoque. photograpy by Kevin Marple
photograpy by Kevin Marple
If pressed to suggest a downtown restaurant for an out-of-town visitor, someone with a sense of style and educated palate, what would come to mind? The dining rooms of Charlie Palmer, Stephan Pyles, and the French Room are certainly elegant. Several of the establishments at One Arts might be good choices, especially if our imaginary visitor were dining before a show in the Arts District. But what if I told you my first recommendation right now would be a steak joint run by a chef who wears a cowboy hat in the kitchen?

Oh, I can hear you groaning, “Just what we need, another schmaltzy caricature to reinforce the who-shot-J.R. image of Dallas.” You’d rather the world know that we’ve outgrown our Dallas days and that the TV show should have been called Fort Worth in the first place. You want to tell people that Dallas is—and always has been—a big city full of sophisticated, elegant, and culturally attuned citizens. That might be true, but it won’t put visiting butts into banquettes. Ask Dean Fearing. He played to the Dallas stereotype when he strutted around the luxurious room at the Rosewood Mansion on Turtle Creek in his fancy Lucchese boots. He wooed the crowd by shouting howdy in a hushed, white-tablecloth setting. He dropped “y’all” and “quenelles de poisson” in the same sentence. Dean backslapped regulars so hard, they almost choked on their $50 entrées.

At Dallas Chop House, Kenny Mills is a softer, gentler cowboy. He’s more of a steak whisperer than a gregarious gunslinger. Which is not to suggest he’s anything less than a large presence in his restaurant. Once you climb the stairs in the foyer and pass the hostess stand, you come upon a glass-enclosed kitchen. Mills is the one wearing a chocolate brown felt Gus cowboy hat. Occasionally, he grasps its creased top and tips it to the ladies. 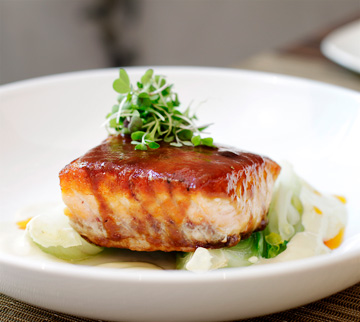 Asian salmon. photograpy by Kevin Marple
photograpy by Kevin Marple
Mills has ridden a lot of Wolf ranges around town, most notably at Sullivan’s Steakhouse, Chamberlain’s Fish Market Grill, Little Katana, and four years at Capital Grille. He consulted on Go Fish Ocean Club, the upscale seafood concept in Far North Dallas owned and operated by DRG Concepts, whose portfolio also includes Dallas Fish Market, Fish Express, and, now, Dallas Chop House. At the top of DRG sits the 36-year-old Mike Hoque, certainly one of the most ambitious restaurateurs in Dallas at the moment. When Hoque, who has to this point focused on seafood, announced his plans to open an upscale steakhouse in downtown Dallas, it sent tongues wagging in the restaurant community. One prominent restaurateur asked me, “Who the hell does he think he is?”

I think Hoque is one smart, hardworking dude. He recruited Mills, who knows his way around a side of beef, and asked him to create an innovative steakhouse menu. Hoque leased a 6,800-square-foot space on the ground floor of the Philip Johnson-designed Comerica Bank Tower, across from Main Street Garden, and moved his corporate headquarters upstairs. But opening Dallas Chop House as 2009 came to a close was just the beginning of Hoque’s plans for downtown. In March, he hired John Tesar, the chef who left the Mansion in January 2009, after a curiously short tenure, for gigs that didn’t pan out in New York City and the Woodlands, outside of Houston. Hoque hired Tesar as culinary director to work under corporate chef Anupam Joglekar (aka A.J.), whose French Asian fusion background includes stints at Bengal Coast, Boston’s Mantra, and kitchens in Bangalore, New Delhi, and Calcutta. Together, Tesar and Joglekar will “lead culinary direction” of a DRG expansion that will include two more planned restaurants across the street from Dallas Chop House. If all goes well, Tesar will eventually be rewarded with his own restaurant.
But other than a few suggestions from Tesar and Joglekar, Dallas Chop House is Mills’ sole domain. He designed a basic menu of steaks, chops, and seafood, then dressed it up with a few innovative items and some New Age touches. 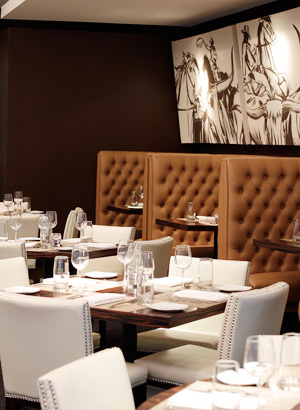 The interior. photograpy by Kevin Marple
photograpy by Kevin Marple
If you ask, Mills will give you a quick tour of his meat locker. You can tell from his grin, as he opens the door and steps in, that he’s proud of the huge slabs of meat resting on wire shelves in various stages of the aging process. He could be a rancher surveying his herd. But the cowboy image doesn’t exactly jibe with the 38 brick-size blocks—100 pounds—of pastel pink Himalayan sea salt, the “it” salt of New Agers. Spas and alternative medicine fanatics all over the world tout its healing powers.

“Oh, the sea salt is purdy amazing,” Mills says. “It comes from the foothills of the mountains in Eastern Pakistan, and it is the purest salt to be found on earth.” Mills, who obviously has been touched by a spiritualist, claims the Himalayan sea salt intensifies the dry-aging process as it draws moisture from the air. The dryer air breaks down the connective tissue and the natural enzymes in the muscle, creating a more tender cut of beef with a greater concentration of flavor. “Those pink salt homeopathic candles in the stores help people breathe,” Mills says. “I think my dehumidifier puts the salt in the air and works on the meat. I haven’t tested it, but I believe it.”

Salt theories aside, all the steaks I tried at Dallas Chop House were superb. On one visit, our enlightened server told us the number of days the steaks had aged. Both the porterhouse and bone-in rib-eye, aged 43 days, were tender and full of nutty, concentrated beef flavor. There was no need to add one of the menu’s seasoned butters (blue cheese, lobster, truffle) or rubs (Asian, Moroccan, Southwestern).

The seafood dishes we tried surprised me. For a restaurant that spends so much time and money on beef, Dallas Chop House’s Alaska king crab legs were fresh and meaty, not the watery version I usually find in Dallas. What I expected to be the usual plate of seared sea scallops was, in fact, a lovely arrangement of four crispy scallops glazed with a white miso.

But the herb-roasted half-chicken was a disaster. Despite a pool of Creole meunière heavy on the Worcestershire, the chicken was so tough that I couldn’t cut it with a steak knife. I tried to pull off the skin, and an inch of meat came up with it. It was like it had been cooked the day before and reheated. The umami-style spinach, a nod to the trendy “fifth sense” of taste, was nothing more than overcooked greens with garlic, soy, and fish sauce. Steak fries, which were baked, chilled, and cut before being fried to death with garlic and prosciutto, had not a speck of ham in sight.

I was intrigued by Mills’ decision to offer steak tartar, sweetbreads, and beef tongue as appetizers. The move certainly is a great conversation starter. On one visit, I had to force my tablemates to try the tongue. Dang if it didn’t come out as hard and dry as boot leather, and it was smothered in a spicy chimichurri sauce that could cover a multitude of poor cooking techniques. I’m afraid three people ate tongue for the first and last time in their lives.

All of the vegetables could have used the healing powers of sea salt and lemon juice. A side of asparagus was crisp, but the uninspired “tapenade” consisted of halved kalamata olives and strips of sun-dried tomato. The overripe tomato and grilled squash that accompanied the steaks were so bad that we scraped them off the plate.

Despite the flaws in the food, I would go back to Dallas Chop House on my own dollar. The dining room, which seats 165, is dark and sexy. The interior has a Texas accent without hitting you over the head with kitsch. The indoor-outdoor bar is a magnificent setting in which to have lunch, hang out after work, or drink a cocktail before dinner.

Although the servers were young, they were well acquainted with both the menu and good manners. The pace of each meal varied but never lagged. The wine list is well constructed and, for the most part, traditional. There aren’t many choices to wow an oenophile, but there is a good selection of well-priced wines outside of the usual mass-market brands.

After four months of feeding people (and after my visits), Mills tweaked the menu. The beef tongue, an item I rather enjoyed on my second visit, has been taken off the menu, as have the rubs, which I thought were unnecessary in the first place. Why would you spend all of that money to dry age a steak and then cover up its natural flavor with cardamom, cumin, and coriander?

“I’ve had to make a lot of adjustments,” Mills says. “You just have to monitor and adjust a menu when you open a restaurant. I change things according to what people want.”

Looks like the people have spoken. The tongue and exotic rubs have been eighty-sixed, and the cold crab salad has morphed into a traditional crab cake. The umami-style spinach has been replaced by creamed spinach, a regular Dallas favorite. Just like cowboys in the kitchen.