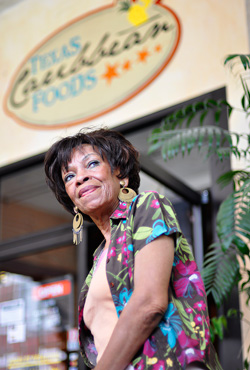 Jan Gore is the building’s spiritual adviser. photography by Bud Force
photography by Bud Force
To say South Side on Lamar is the black mecca of Dallas might be a stretch, but not a huge one. Most people have no idea what goes on here. If forced to describe the place, they’d probably call it something like “urban-style loft living.” I tend to think of South Side like the island on Lost minus the black smoke. People from all over have been beckoned by the building, and here they’ve formed an alternate universe.

On the outside, the 10-story brick building looks a lot like it did when it started out as the Sears, Roebuck, and Company’s catalog merchandise center almost 100 years ago. Inside, oversize concrete columns and exposed pipes can be found in most lofts. Hardwood floors date back to 1913 and are scarred from the passage of dollies. Stairwells are guarded by huge metal Saino Fire Doors with rusty handle fasteners that read “Patented January 24, 1911.” An area on the first floor now known as the Artists’ Quarters saw trains travel right through the building, loading and unloading cargo in spots now occupied by shops and galleries. Matthews Southwest bought the building in 1997 and opened it three years later with more than 450 units. If a sort of 21st-century black renaissance were going to happen in Dallas, the setting couldn’t be more perfect.

Of course, I didn’t know all this when I started coming to South Side’s Opening Bell Coffee a few years back. All I knew was that the place in the basement had wi-fi and was a good spot to get some writing done. But then it happened: I saw black people.

On a weekday afternoon, you might find yourself waiting for an elevator next to Commissioner John Wiley Price, State Rep. Eric Johnson, or Dallas NAACP president Juanita Wallace. A few months back, I rode the elevator with actress Liz Mikel, whom I had seen in a stellar production of A Midsummer Night’s Dream at the Wyly Theatre late last year. She moved into the building after losing nearly everything she owned in a house fire. On another occasion, I rode up with Brett Harper. The thin, dreaded fellow I call “The Dog Whisperer” is a model and actor whose daytime gig is taking care of animals in South Side and a few other buildings downtown. That day, Brett got on the elevator with Luka, a husky with eyes like the sky, and Brett’s own dog, Max. Luka was feeling a bit frisky and wanted to check out what was in my bag. Brett looked down, and, in a quiet but stern voice, whispered to the dog, “You know we don’t do that.” The husky bowed his head and sat in the corner of the elevator perfectly still for the remainder of the trip. A couple of Dallas Mavericks live in the building, too. It’s an eclectic mix. Often when friends and associates stop by, I can see them holding something back before the words spew forth: “There sure are a lot of black folks around here.” 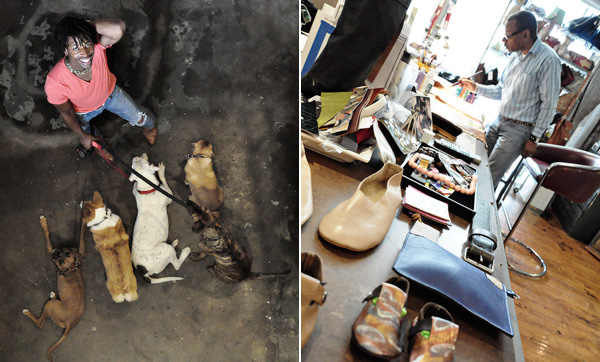 (left) Brett Harper is a model and actor whose daytime job is taking care of pets. (right) Arthur Porter works in his artist loft. photography by Bud Force
photography by Bud Force
Now I’m a tenant, too. Awhile back, I launched a website called Dallassouthblog.com. When I moved our tiny newsroom into the building, I was a little self-conscious about the decision. The guy who supposedly loved Oak Cliff and had a heart for Southern Dallas was practically setting up shop downtown. I told myself that since South Side shares a ZIP code with South Dallas and is a few feet south of I-30, it was all good.

I’ve worked in environments with a high concentration of African-Americans before, but it was nothing like this. In my first job out of college, at an IBM call center, everyone had his head down, grinding away, counting the hours until a Friday night out at the Filling Station or Park Avenue. Even during my days as a legal drug dealer (aka pharmaceutical sales rep), our Dallas team consisted of more African-American associates than entire multistate regions. But it was a pretty homogeneous group. Conversations revolved around what types of furniture to buy with bonus checks or complaining about the free company cars.

South Side is different. The people here—the black ones and those of other races, too—form a real community that looks out for each other. Early on, Marion Marshall helped me know that I’d come to the right place. Marion lives in a basement loft where she runs Absolutely Blooming, a floral shop.
Folks in the building call her the mayor of South Side. After inviting me over for a building orientation, Marion impressed upon me how often people in the building collaborate with each other. She even offered to write a few pieces for our website. We selected South Side’s Design Factory to produce our marketing pieces. The firm owned by Sederrick Raphiel performs the same function for the Dallas Convention & Visitors Bureau and runs their Visit Black Dallas web portal. 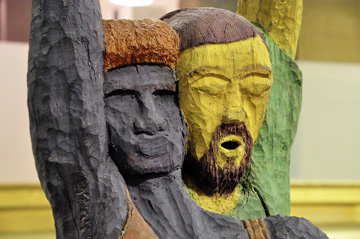 photography by Bud Force
photography by Bud Force
If Marion is the mayor, then Jan Gore is South Side’s spiritual adviser. Jan owns Texas Caribbean Food. In a previous life, she worked in the governor’s office with Ann Richards. No one embodies or understands the spirit of South Side like Jan does, and she’s always ready to impart wisdom—solicited or unsolicited. A few days ago, I stopped by to order jerk chicken wings, and Jan wanted to introduce me to Plaxo. “It’s like Facebook for businesses,” she said in her gravely tone.

Then there was the time she helped a local artist who had fallen on hard times. Though the story of Sam Fuller made for gripping television on MTV’s reality series The Buried Life, 30 minutes couldn’t begin to tell the full story. After the four Canadian principals of the show found Sam on the streets of Deep Ellum last summer and asked him what he wanted to do before he died (reconnect with his 19-year-old son whom he hadn’t seen since the boy was 2), they brought him down to Opening Bell. Jan, whose restaurant is next door to the coffee shop, wandered over to see what all the fuss was about. As an art lover, she was moved by Sam’s colorful drawings depicting jazz, blues, and gospel. But she was also moved to action when she learned that Fuller was living at the Austin Street Shelter. Jan called on all the resources at her disposal, and, after talks with the building’s owner, she got Fuller a space in the Artists’ Quarters, where he now has a chance to rebuild his business and his life.

There’s a famous photo that hangs on the wall of Brooklyn Jazz Cafe, down the street from South Side. It’s titled A Great Day in Harlem. Taken in 1958, it depicts some of the greatest jazz musicians in history, all of whom were living in Harlem at the time. The photo makes me think of the scores of talented people sharing this space in 2010. Every time I walk through the doors of Dallas’ red brick landmark, I consider it a great day at South Side.