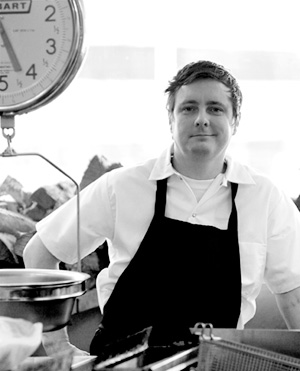 Chef Tim Byres photography by Kevin Hunter Marple
photography by Kevin Hunter Marple
The talented folks behind Smoke, the new upscale-ish locavore-meets-barbecue restaurant adjacent to Belmont Hotel in Oak Cliff, need to take a chill pill. Its owners, Christopher Jeffers and Chris Zielke, already have one runaway hit with Bolsa, the hip restaurant they opened on West Davis in mid- 2008. Barely a year into the raging success of Bolsa, Austin-based Bunkhouse Management, the firm that operates the Belmont, asked the guys if they’d be interested in redeveloping the property’s fledgling restaurant, the Cliff Cafe.

Like pigs to slop, they dug into the project and made a mess. Their mission statement reads: “Scratch cooking start to finish. All cured meats and fish are smoked in house. We bake our own breads and jar preserves. We subscribe to a farm-to-fork mentality. Utilizing our garden as well as local farms when available—including our meats, poultry, eggs, and dairy. Simply put, everything we serve is made here or as close to possible.”

The result is a rambling, unfocused menu that puts style over substance. Though their hearts may be in the right place, this nice group of guys—which also includes Tim Byres, former executive chef at Stephan Pyles—is so in love with their restaurant concept that they’re blind to what’s going on in the restaurant. Save for a few exceptions, they fail to execute great food on many levels. Sure, it’s trendy to make your own, but DIY is only worth the effort if the end result beats what you can buy. If the customer can’t tell the difference between store-bought and house-made butter, why not focus that energy into other aspects of the business? Like training the staff.

I found plenty of food faults at Smoke, but the most egregious errors were committed by the servers. The dining room was half full on our first visit. We were seated near the fireplace, and we settled in for a long, cozy dinner. We ordered wine and salads. The salads arrived before the wine, but we went ahead and selected our entrées at that point. The wine and the main dishes were delivered simultaneously. Our entire dinner experience lasted 38 minutes. The check came without an offer of dessert.

The second meal took place on a busy Saturday night. Our four-top received the same treatment: drinks came after appetizers. As we grazed on runny pimento-less pimento cheese croquettes that resembled something you’d find in an off-brand frozen dinner, four servers loaded down with the remainder of our order, which included entrées and appetizers, surrounded us. “You’re kidding,” I said. “We just got our first appetizer.” They didn’t seem to care. Our waiter quipped, “This is the way it came out of the kitchen.” We had them box four items, including a side dish of hominy and the onion, charred turnip, and kale soup before they set the platters down.

I took my third trip to Smoke on a Sunday morning to try the breakfast menu. The experience will go on my list of all-time worst service faux pas. Here are two excerpts from my conversation with the waiter, the same one who’d boxed up our unserved food the month before.
I said, “The Hungry Bear ham says it is artisan style. What does that mean?”

He responded, “That just means the way the chef prepares it. It refers to the setup of the ham—you know, the way he takes his time to slice it.”

“Can you explain the Dilbeck granola parfait? What does Dilbeck mean?”

“Dilbeck is the ground of the granola.” 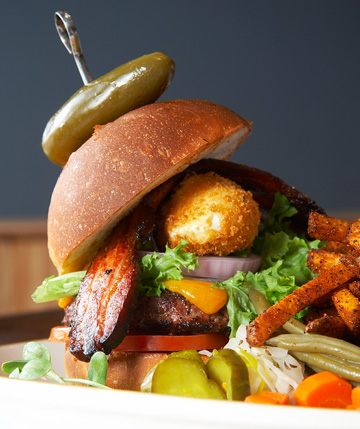 OVER THE TOP: Burgundy beef burger with bacon and farm egg fritter, topped with jalapeños photography by Kevin Hunter Marple
photography by Kevin Hunter Marple
I suppose I should give him points for improvisational creativity. But Charles Stevens Dilbeck was a noted local architect who, in the ’30s and ’40s, designed homes in Highland Park, Preston Hollow, Lakewood, and Oak Cliff. Dilbeck is responsible for the Art Moderne design of the Belmont Hotel. After the waiter left the table, I covered my face with my hands and said a silent prayer for the owners. Poor service can hurt you, but ignorant service, especially in a restaurant with a menu that begs the customer to ask questions, is inexcusable.

Breakfast was the best meal I ate at Smoke. Despite that it took our waiter 24 minutes to notice that my coffee cup was empty (I put a stopwatch on him), I would go back for another plate of brisket cornbread hash. A crunchy brisket “patty” sits atop cornbread croutons, green chili rajas, and pearl onions, and it’s topped with a poached egg. Here the creative concoction works wonderfully. And Byres’ biscuits are wonderful—6 inches of fluffy, airy goodness. The effort that goes into making the three contrasting jams—spicy jalapeño, sweet orange, and mixed berry—is time and money well spent. Here, DIY is divine.

The menu describes the pancakes perfectly: “heavy-handed blueberry and house made ricotta cheese pancakes with vanilla poached apricots and cream.” The pancakes were invisible. They were covered with a thick jam of apricots and blueberries, and garnished with a baseball-sized dollop of fresh, rapidly dissolving, whipped cream. For me, this dish was more like a dessert than a breakfast. A side of the aforementioned Hungry Bear smoked ham was tender enough to cut with a fork. However, the Dublin Dr Pepper red-eye gravy may be too sweet for those who prefer a saltier country ham.

Now on to the inspiration for the name Smoke. I took a group of barbecue fanatics to lunch. I’m sure you know the type. They don’t like fussy things or fancy settings. So you can imagine the confused look on their faces when they were handed both a menu and then, for the table, one Scantron card, like the sort you used to take the SAT. Once again, style over substance. Why bewilder the customer with kitschy gimmicks like a Scantron card whose confusing hodgepodge of boxes are to be checked off to indicate barbecue and side order selections in various proportions?

The barbecue at Smoke is average at best, and I’m not surprised. You just don’t take a culinary-school-educated chef like Tim Byres, who has a fine-dining background, send him on a road trip through the South to check out barbecue joints, and expect him to come back and start turning out authentic barbecue. A chef can’t pick up enough tips from veteran ’cue dudes; you have to spend years immersing yourself in the culture of barbecue to get it right.

Or even close. The coffee-cured beef brisket was so dry that I almost choked. I could have slathered it with one of the four fancy sauces they put on the table, but the thin, vinegary mustard and horseradish sauce turned my stomach. The dry-rubbed pork spare ribs were tender and juicy, but you couldn’t taste the meat; the ribs were drowning in a sugary-sweet sauce. (Why bother with the rub?) The house-made sausage, with paprika and fennel seed, is good, but you’d better love fennel. The best meat we tried was the lemon-and-sage-brined turkey breast. The meat was moist and untouched by sauce. As I type this, I am noshing on leftovers, and I’ve just figured out what was missing from all of the meat—the taste of smoke. 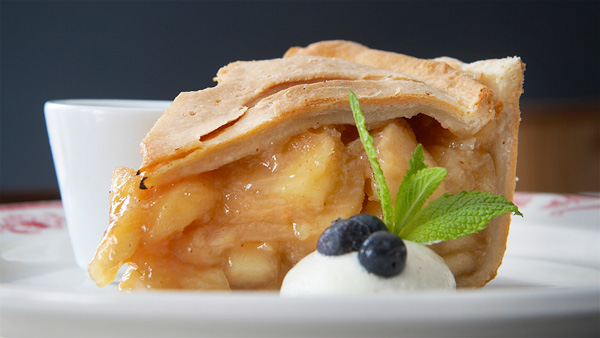 photography by Kevin Hunter Marple Rosemary caramel apple pear pie
Rosemary caramel apple pear pie
The joke is on you, dear customer. These guys did a great job playing the eat-think-local-green card at Bolsa, a restaurant that seemed to evolve naturally. Conversely, the menu at Smoke is forced and reads like a script for a Saturday Night Live spoof on locavores. Take a recent special, which was handwritten on the “Raising Hell From Scratch” chalkboard menu: “American artisian [sic] cheese and Smoke house ham with Smoke garden lavender honey apricot mustard cranberry and vincotto.” Is that all? Did the garden not have a coconut tree?

At Smoke, I think we have a case of boys with expensive toys trying to pull off too many tricks at one time. Hopefully, they’ll settle down and focus their talents. If not, diners will eventually wise up and stop paying a premium for meaningless, trendy verbiage. All they really want is a great plate of food. I think that old granola cruncher Charles Dilbeck would agree with me.