No matter your stance on the immigration debate, you have to agree that Dallas’ culinary landscape has been made more interesting by our itinerant neighbors to the south. Take the humble taco. Small mom-and-pop taquerias grace street corners from Oak Cliff to Bachman Lake, from Garland Road to Maple Avenue. They serve tacos in settings only one step up from the street vendors in Central Mexico. The food itself is simple: a fresh, hot corn tortilla rolled around a variety of meats, topped with chopped onion and cilantro, and served with a lime wedge. The meats are usually chicken, pork, or slow-cooked cheap cuts of beef (tongue, cheek, or brains). Like barbecue in the States, taco styles vary across Mexico. Visit the Baja Peninsula or Yucatan, and you’ll find grilled or fried fish tacos. But as a rule, the traditional taco as made in Mexico is inexpensive and uncomplicated.

Enter the gringo taco. You’ve seen the restaurants popping up across North Texas. Gringo tacos are Americanized versions of the Mexican street food. Venture capitalists have hired chefs to dress up the proletarian taco with bourgeois ingredients. They’ve made tacos less Oak Cliff and more North Dallas. Al pastor (pork marinated for a day or longer and slowly cooked on a vertical rotisserie) becomes “roasted pork.” Barbacoa (slow-cooked meat from a cow’s head) becomes “braised beef.” Traditional Mexican Cotija or queso fresco gets replaced with feta cheese. You don’t have to look for these places on a street corner; you can follow them on Facebook and Twitter. And, oddly, as the chefs make the tacos less threatening, the marketers are writing menus filled with sexual innuendoes. (Torchy’s serves something called a Dirty Sanchez. Trust me: you don’t want to look it up on Urban Dictionary.)

With the admission, then, that I am a traditionalist, here’s my take on five of the newer gringo taco shops. Let’s start with the best and work our way to the worst. 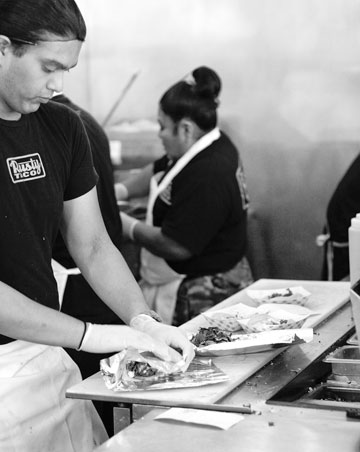 Rusty Taco photography by Kevin Marple
photography by Kevin Marple
1. Torchy’s Damn Good Taco Shop.
Recently I received an e-mail from a reader. “I love the Democrat at Torchy’s. It’s got barbacoa. Only, this evil man who wants to suck the joy from tacos told my friends and me that barbacoa is made from a cow’s head. Now I’m in a perpetual state of wanting to hurl.” And now you know what the marketers are up against.

This polished Preston Forest restaurant began in 2006 at a lowly food trailer park in South Austin. The beat-up trailer still serves tacos, but there are now five gussied-up brick-and-mortar locations in Austin, one in Dallas, and more in the works.

On opening day, and for weeks, lines of hungry, faithful followers trailed out the door and around the building. Luckily, on the night we dined, the crowds had thinned. “Does the barbacoa come from the head of a cow?” I asked the woman at the counter. “No, it just comes from a cow,” she answered with a quizzical look on her face. (She might want to chat with her boss. “Our barbacoa is authentic and made from a cow’s head and cheek,” Michael “Torchy” Rypka later told me. “This is traditional barbacoa, not just shredded meat from somewhere else.”)

Because the tacos were pricey—$3.25 to $4 each—I wondered how many to order. “I tell women to order two and men to order three,” the woman said. Chips and dips are extra: green chile queso and chips ($4.95), chips and salsa ($3.50), and chips and guacamole ($4.95). We went with the queso, a fabulous rendition laced with green chiles and topped with a smidgen of guacamole and fresh cilantro. Worth every calorie.

The tacos are huge and overstuffed (gals, you can make it on one). We had to use a knife and fork to conquer the Democrat (rich, slow-simmered shredded beef, onions, avocado, cilantro, and feta cheese on a corn tortilla). Ditto for the Baja shrimp taco, a flour tortilla crowded with battered fried shrimp, cabbage slaw, feta (although the menu says queso fresco), pickled onions, and jalapeños slathered with a cream-based chipotle sauce.

Torchy’s does a great job with breakfast tacos. You can build your own or choose my favorite, the migas taco, with scrambled eggs, green chiles, avocado, and shredded Jack and cheddar cheese. The popular (and vulgarly named) Dirty Sanchez is not really a taco; it’s a mouthwatering mosh pit of eggs, guacamole, shredded Jack and cheddar cheese, fried poblano pepper, and crispy pickled carrots, all slathered with poblano ranch dressing and wrapped in a flour tortilla. It goes great with the Dublin Dr Pepper on tap, which almost makes up for the fact that Torchy’s doesn’t serve beer. 5921 Forest Ln., Ste. 200. 972-720-9200.

2. Rusty Taco.
Two tubs of iced beer are the first thing you see when you open the front door of Rusty Taco. And it’s cheap: Negra Modelo, Pacifico, and Corona are $3.50, and lovers of domestic stuff will be happy to pay only $2.50 for a Coors Light or Pabst Blue Ribbon. And Rusty Taco may have the friendliest staff in town. Opened by Rusty Fenton, who co-founded Uncle Julio’s, this mechanic shop-turned-taco shop keeps it simple. All the handmade street-style tacos are $2 and small enough to pick up. Our favorite, the signature Rusty Taco, balanced the sweet acidity of fresh pineapple chunks with roasted pork scented with achiote, a sweet and peppery rusty-toned spice. Skip the fish taco. A grilled or fried “mystery fish,” according to one of the cooks, is lost in a sea of red cabbage and chipotle dressing. Breakfast tacos draw early-morning crowds who linger on the patio, and the $5 margaritas “made with fresh lime juice and cheap tequila” call many workers to an early happy hour. Drinks go down easy with a basket of chips and salsa ($1), an order of guacamole ($3), and a cup of queso ($3).

3. Rock N Taco.
Most of the diners on the patio at 2 on a Friday afternoon looked like they had just rolled out of bed. Unshaven men in grubby t-shirts and women with teased hair slouched in metal chairs and adjusted their sunglasses to read the menu. The gaudy (empty) interior, highlighted with hot pink accents and black-and-white paisley print in cut velvet, probably looks better late at night (the restaurant is open until 3 am on weekends). As our waitress with the pierced tongue took our order, we didn’t have high hopes for the quality of the tacos.

But tattoos and body piercings aside, Rock N Taco presents a pretty plate of tacos at a good price (four tacos traditional for $10). We even found Spanish on the menu: pechuga de pollo a la plancha (grilled chicken), camarones Diablo (garlicy shrimp, pico de gallo, and red pepper), and picadillo (ground beef with lime and honey). You can mix and match as you please, and each platter comes with a bowl of spicy black beans and rice, which can be substituted for pickled vegetables. The tacos are served with either white corn or house-made flour tortillas and are small enough to pick up. The shrimp was delectably spicy (watch out for dripping grease), but any taste of Baja-style white fish was obliterated by the jalapeño cabbage slaw. 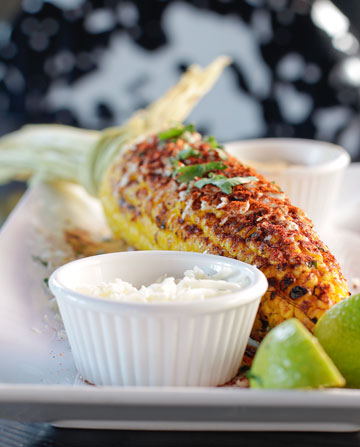 Rock N Taco Earth, Wind & Fire Roasted Corn on the Cob photography by Kevin Marple
photography by Kevin Marple
4. Yucatan Taco Stand Tequila Bar & Grill.
I found the best fish tacos at this slick Latin restaurant slash taqueria in Frisco. The recipe was developed by chef Paul Willis, the creator of the original Fuzzy’s Taco Shop in Fort Worth, where Willis is generally credited with importing the Austin taco craze. When he opened Fuzzy’s in 2001, the place was mobbed with politicians and TCU students and professors. He put feta cheese and garlic sauce on tacos and created a cult following.

Willis is no longer affiliated with Fuzzy’s. He devotes his attention to his mini-empire of restaurants that includes Cabo Grande, H3 Ranch, Pedro’s Trailer Park, and Buffalo Gap Steakhouse and Cantina. Although Yucatan is a full-service Latin restaurant, the menu is accented with tacos reminiscent of those found in the Yucatan region of Mexico. Its signature is the tempura fish taco. Tilapia is dipped in tempura batter and corn flakes and deep fried. The crispy fish is placed on two fresh corn tortillas and smothered with a mound of lettuce, tomato, purple cabbage, roasted garlic sauce, and mild Chihuahua cheese. The interior is contemporary and spiffy, and the 80 brands of tequila almost disqualify Yucatan from the taco joint category. But the presence of stiff drinks certainly qualifies it as a major gringo taco lover’s hangout.

5. Fuzzy’s Taco Shop.
This popular Fort Worth spot is credited with starting the taco fires now burning across North Texas and into Oklahoma. Fuzzy’s president, Chuck Bush, has 65 franchises projected to open over the next five years. I am late to the phenomenon of Fuzzy’s. I haven’t been to the original on Berry Street. I do not own a ragged “Eat Me” t-shirt. I’ve dined only at the Dallas and Plano outposts. For me, that’s been two times too many.

What a pitiful excuse for a taco. At least they’re cheap. For $1.99, you can choose fish (pollock), shrimp, garlic shredded beef, ground beef, grilled chicken, shredded pork, or grilled vegetables. In the end, it won’t matter, because once the kitchen piles on the fixings, they all taste the same. The protein (or vegetables) is covered with garlic sauce, feta cheese, tomatoes, and a fistful of shredded lettuce. The preformed hard-shell version is worse. A thin layer of filling at the bottom is masked by lettuce and garlic sauce. You can’t hear it crunch because the music is so loud. I’ll give them this, though: there are 12 beers on tap, including Franconia Baja Blonde. A plate of huevos rancheros at another table looked tasty, but I didn’t order it because this review is about tacos. And I’d rather eat the raw meat from a cow’s head than waste another calorie on a taco at Fuzzy’s.