*Restaurant of the Year* 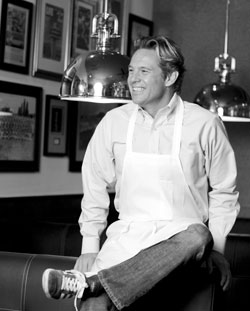 Owner and chef Nick Badovinus photography by Kevin Marple
photography by Kevin Marple
I’ve written a lot of glowing words about Nick Badovinus—with the notable exception being a review in 2000 of Phil Romano’s long-gone We Oui, where Badovinus served as executive chef. Since then I have chronicled his rise through the ranks of Tristan Simon’s Consilient Restaurants. When he and Simon parted ways, I traveled to San Francisco with Badovinus to watch him eat his way across the Bay as he did research for his first solo venture, Neighborhood Services.

So as we considered this year’s field of new restaurants, I was almost inclined to ignore Badovinus’ NHS Bar & Grill, just to save myself from embarrassment. There has been too much of Badovinus in these pages. Someone else deserves the attention. Not this kind, handsome, likable guy who happens to be as skilled a designer as he is a chef (he does his own interiors). All three of his restaurants, opened in a span of only 20 months, are packed. So why not name Meddlesome Moth the restaurant of the year?

It’s simple. NHS Bar & Grill is flawless. Badovinus has taken the best components from his first two start-ups, Neighborhood Services and Neighborhood Services Tavern, and brought them to the Bar & Grill. It’s a hybrid, but it’s a distinctly unique dining space. His staffers are dedicated and appear to love their jobs. Chef Scott Freeman has worked beside Badovinus for years. And even though the Bar & Grill is larger than its two sisters, it is quieter thanks to carpeting, soundproofed walls, and high-backed booths.

The bar overlooking the kitchen photography by Kevin Marple
photography by Kevin Marple
Here is something I’ve never said about another Dallas restaurant: I could eat at NHS Bar & Grill every night. Each item on the menu is delicious, satisfying, perfectly executed. The specials change based on what is fresh and seasonal. When I’m feeling blue, I want a plate of handmade pappardelle covered with the finest Bolognese sauce I’ve ever tasted. Seafood? I’ve eaten black striped bass, pan-roasted halibut, and tempura-battered fish and chips, and I’ve never had a bad bite. I dream about the veal schnitzel.

All of which makes me want to say something bad about Badovinus, just for balance. He’s a goofball. I asked him to describe the thinking behind his interior design. He went on for half an hour, seemingly without taking a breath. “They are emotionally charged reflections of my life and my intense dedication to the spirit of life in America,” he says. “They’re about the journey—not just mine but anyone’s journey. Perhaps they’re too emotional. I have pictures on the walls of me as a little boy with my dad and grandparents. I’m just so lucky I can share my spirit of achievement.” 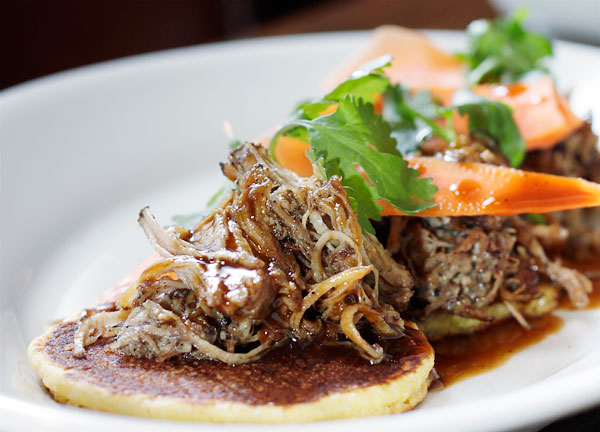 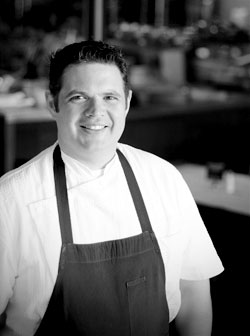 Chef Chad Kelley photography by Kevin Marple
photography by Kevin Marple
Too many Dallas taprooms call themselves a gastropub but serve nothing but standard bar grub. A true gastropub combines fine food with the casual atmosphere of a pub. And plenty of good beer, preferably even some rare and unusual stuff. That’s Meddlesome Moth. Owner Shannon Wynne, his partners Keith Schlabs and Larry Richardson, and executive chef Chad Kelley have created the finest gastropub in Dallas.

Schlabs, the palate behind the beers, has traveled the world and uses every contact he has ever made to keep the list of brews current and cutting edge. The global list includes 120 beers, with 40 of them on tap. Schlabs goes out of his way to procure one-of-a-kind suds. He ships empty firkins to small breweries and asks them to fill the wooden casks with something special and ship it back. Each Wednesday, Schlabs taps a different keg, and when it’s empty, he cleans it out and sends it to another brewery. If you don’t know beer, the bartenders at the Moth are excellent teachers. Ask for Matt Quenette—one of only four level-two Certified Cicerones (master sommelier of beer) in the state—to guide you through a flight of beer.

The 5-ounce pours are a great way for beginners to taste and identify the differences among hops, malts, and yeast.

Kelley has crafted a knockout European-style menu that includes novel (for Dallas) dishes that pair perfectly with beer. It also offers a wide variety of shared plates, such as spicy hummus, crawfish tails in Creole sauce, and a beef shank from nearby Burgundy Pasture. Listed on the menu as “shin of beef,” the shank is braised in Breckenridge Vanilla porter for four hours, finished off with a touch of balsamic and puréed figs, and placed on a toasted brioche. A thick layer of brie is melted on top. For those who don’t care to share, you’ll be happy with a platter of Kelley’s rendition of fish and chips. Thick strips of Pacific cod are battered and bathed in Left Hand Sawtooth Ale. Warning: if you order the signature Moth Balls, you will want them all to yourself. The luscious pasta-like spheres are sauced with a cream reduction and scented with brown butter and fried sage.

The groovy atmosphere also distances the Moth from other so-called gastropubs in Dallas. The interior is dominated by enormous stained-glass windows rescued from Dallas’ first Hard Rock Cafe (called The Trinity, they depict Elvis, Chuck Berry, and Jerry Lee Lewis). The bar area is sophisticated and comfortable. The Moth doesn’t attract one specific customer. It appeals to bearded beer nerds looking for new unfiltered cask ale and Highland Park ladies who have ditched their favorite Chardonnay for a Belgian Chimay. 1621 Oak Lawn Ave., 214-628-7900. —N.N. 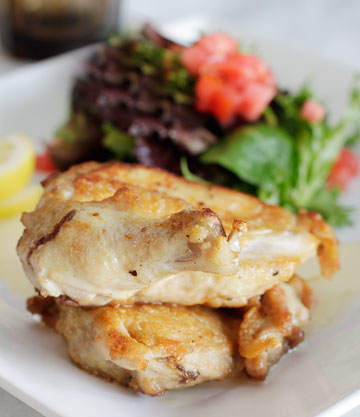 Foghorne Leghorne Pan-Seared Chicken photography by Kevin Marple
photography by Kevin Marple
In a city known for breeding chains, Horne & Dekker stands as a beacon of quirky originality. Table centerpieces consist of canned veggies, but they serve a purpose, doubling as pizza stands. The front patio has a whimsical wall upholstered with Astroturf. Dishes are cute, too, like Dekker Devils, the name for the restaurant’s signature deviled eggs. Credit the cheeky youthfulness of spiky-haired Shawn Horne, who has partnered with capable corporate restaurant guy Flynn Dekker. Horne—who has worked in many Dallas restaurants, including his own Kitchen 1924, which closed in 2008—infuses the place with laid-back charm. Bask in his warmth and you’ll swear the cedar-plank salmon in front of you is the best you’ve ever had. The menu of dressed-up Southern specialties is loaded with personality, making you want to order everything you see, be it pork carnitas braised in Dr Pepper or finger-lickin’ fried chicken. Salads are done right, with immaculate greens handled well. Pizzas topped with chorizo or roasted duck are legitimately terrific, thanks to the world-class wood-burning oven they inherited with this Henderson Avenue space. Sides are outside the box, from whipped sweet potatoes with a torched marshmallow cap to housemade spaetzle gone gonzo with cheddar and blue cheese. And, no surprise, desserts are a crazy spree, especially the retro chocolate-dipped peanut butter buckeyes served with a scoop of housemade vanilla ice cream. Here’s to never growing up. 2323 N. Henderson Ave., Ste. 102, 214-821-9333. —Teresa Gubbins
Next »