For 12 years, I lived on Travis Street, between Cafe Madrid and Mort Meyerson’s Power House. For the first few of these, a slow-moving freight train ground its squeaky way just several dozen feet from my house, along the old Missouri-Kansas-Texas line at 3 in the morning. One day in 1992, though, the trains stopped. The tracks grew overgrown. Then, as if by miracle but in fact by forethought and human generosity and will, the tracks were dug up and the initial stretch of the Katy Trail opened.

Today I live in Uptown, a little farther from the trail, but still close enough to enjoy its 3.5-mile length. At least once a week—usually on a Sunday—except in the summer, I do the circuit, 7 miles total, up and back from the American Airlines Center at Victory Park to Airline Road in University Park. I do not run, nor do I bike or skate. I walk. Two hours, door to door, in and out, up and back. Like any pedestrian who makes the same trek for work or pleasure, I can achieve not only a Zen consciousness, getting “into the zone,” but also, more important, I can see the same things every day. The same things, but of course they are always different. Walking demands attention. Attention leads to receptiveness, then to sensitivity, and finally to vision.

Walking on the Katy Trail also demands something else: either planning or luck or cunning. I walk down a small street and then pull myself up over a retaining wall with the help of a convenient and compliant elm tree. Others who live near the trail have forged other paths through woods and up hills. People who live far away have to get to the trail, find parking, and then get on it.

Things are changing, and for the better. For several years, courtesy of the Meyerson family and others, David’s Way, at Knox Street, has offered an entrance at grade. You can get on at Victory, if you live or can park nearby. Another at-grade plaza, Dedo’s Place, at the north end of McKinney Avenue, has just reached completion. Snyder’s Union, overlooking Lee Park, will open around Thanksgiving. It will feature a view of the fountain at Lee Park Pond, as well as granite benches for the weary, trellises for shade, a three-tiered drinking fountain for canines and their human accessories. Before long, the Friends of the Katy Trail plan further renovations and expansions. All it will take is money.

And the money for maintenance is, and always has been, private. Like listeners of public radio, people who use the Katy Trail fall into two categories: those who offer support and those who don’t. Guess which group is bigger? Keith Nix, a member of the Friends of Katy Trail board, assured me that the overwhelming majority of people who enjoy the trail are doing so for free. The Friends are trying to encourage greater civic-mindedness among those tens of thousands.

Meanwhile, the pleasures are many. I spent Labor Day on the trail, humming part of Ferde Grofe’s Grand Canyon Suite intermittently through my ambles. In the bad months—late May to mid-September if we are lucky—it still amazes me to watch people outdoors between 10 a.m. and 5 p.m. The sun is brutal, the heat and humidity dangerous. A lot of people seem either impervious, heroic, or just masochistic. But there’s a rhythm. At dawn and sunset you get the really serious runners; in the late afternoon, with more shade available, you see more casual strollers.

During the early part of the trek, I saw solo joggers sweating with determination. I saw the inevitable earnest groups of young women swinging their arms and chatting with their girlfriends. Cyclists—some moving gently, others ferociously—signaled “On your left!” as they overtook unsuspecting slowpokes. Well-coiffed Highland Park ladies with their equally well-coiffed, prancing standard poodles shared the path with more ordinary canines and their equally ordinary human companions. 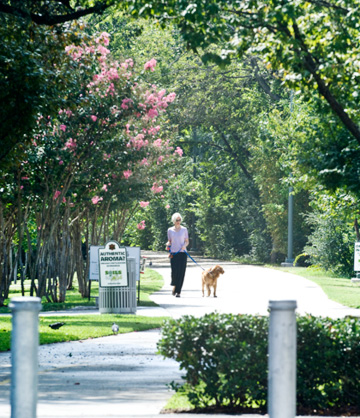 TRAIL MIX: Well-coiffed Highland Park ladies with their equally well-coiffed dogs share the path with more ordinary canines and their human companions. photography by Elizabeth Lavin
photography by Elizabeth Lavin
At least three times throughout the day, I saw pairs of Dallas’ finest—bike-riding cops—patrolling the trail. In the morning, I passed three young mothers jogging while pushing strollers containing not one but two babies. (On Sundays, it’s usually the dads pushing the tots.) Later in the day, maybe because of the heat, some less intense exercisers emerged: old couples arm in arm, families with young children on bikes with training wheels, gay boys holding hands.

Here, as was said of Chaucer’s Canterbury pilgrims, we had “God’s plenty”: old, young, male, female, black, and brown, as well as white. Looking at people on the trail gives you a civics lesson, an image of democracy in action, of politeness. Just reading people’s t-shirts gives you a sense of variety: college logos from Harvard to Ball State, with lots of Texana in between; corporate offices; party announcements. And on it goes.

So much for the fauna. The Katy Trail is also an urban garden, a miniature arboretum. The landscape and the plantings change wondrously along the short path; you feel that you are proceeding through several microclimates. At the northern end, you see the backyards of Park Cities homes. Suburban serenity and sculpted plantings prevail. Once you cross Knox Street, on your way out of the sacred 75205 ZIP code, you enter an area more densely populated and more delicately shaded. Bamboo, honeysuckle, and a kind of semiwildness (everything is relative, of course) take over as you move toward Fitzhugh, Blackburn, Lemmon Avenue (both of them), down past Turtle Creek high-rises on one side and the gardens of elegant townhouses on the other.

photography by Elizabeth Lavin
photography by Elizabeth Lavin
For the first years, the trail petered out after Cedar Springs. Gradually, something more exciting has replaced the gravel path that wound up over Harry Hines, with the industrial flatlands of West and South Dallas in view ahead. After the Thomsen Overlook, a suburban landscape has given way to cacti, native grasses, and buddleia bushes with their accompanying butterflies. Wildflowers, hardy species of wild roses, crape myrtle, morning glory, and trumpet vines add a painter’s palette of color to the granite outcroppings.

If Dallas is going to get a real emerald necklace of parks, like the one Frederick Law Olmsted gave Boston in the 19th century, it will have to spawn more groups like the founders and Friends of the Katy Trail. Katy is finished. But it ought to hook up with similar trails, giving us a network that would turn Dallas into a hike-and-bike center. Plans for this, in fact, do exist. But will the money be there? And, more important, will there be money for maintenance? It’s all well and good to make grand gestures; it’s another to manage upkeep.

On the Monday of my big adventure, one thing surprised me more than everything else. As I approached the end of the trail at the American Airlines Center, I was looking at the foliage when all of a sudden I heard a familiar, reassuring sound. I turned from left to right. There, along I-35, a long, slow-moving freight train was edging its way north, carrying its cargo out of Dallas. It was 8:20 a.m. There was a small hazy fog of industrial pollutants in front of me. The sun was rising to my left. And the sound of the train made me feel very much at home.