Many years from now, Dallas restaurateurs will look back at the dining drought of 2009 like Okies who survived the Dust Bowl. They will tell stories about how bad conditions were, but their grandchildren won’t believe them.

Here and there, though, thanks to irrepressible entrepreneurial spirit, pockets of restaurant life still exist. Just east of Belmont Avenue, on Henderson Avenue, a patch of promising restaurants has sprouted up: Soley, Capitol Pub, Urbino Pizza and Pasta, and Natsumi Gelato. And then there is Park Restaurant, the second—make that the sixth—coming of Marc Cassel, the chef who worked in the kitchens of Baby Routh, the Mansion on Turtle Creek, and Star Canyon before he took command of the Green Room in 1996.

Ah, the Green Room in Deep Ellum, a fine-dining restaurant without an ounce of pretension. It was  Dallas’ first rockstar restaurant. The interior oozed coolness. In the dining room, there were four “cymbaliers,” chandeliers made with plumbing pipe and pieces of broken Zildjian cymbals autographed by local musicians who played at Trees, the next-door music venue also owned by the Green Room’s proprietors. Clumps of plastic grapes and gilt cherubs hovered over a splendid antique bar. A thick deep purple theatrical curtain separated the two rooms. The wine list—and the clientele—was truly eclectic and imaginative.

The food, “collision cuisine,” a hip term for fusion, was an inspired mishmash of global flavors. Even the presentations were wild. A red bell pepper soup was laced with a float of jalapeño coulis that spelled out “room” in green across its surface. The young, bandanna-clad servers were sharp and nimble. Order the Feed Me Wine Me, and the kitchen improvised a four-course meal for each diner at your table, each course paired perfectly with a wine.

When the Green Room closed in 2006, diners were heartbroken. Even though Cassel had departed in 2005 for a short gig at Dragonfly, the death of one of Dallas’ most beloved restaurants was a loss many locals, me included, have yet to shake. 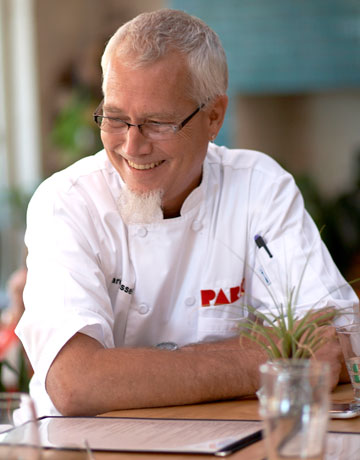 Chef Marc Cassel. photography by Kevin Hunter Marple
photography by Kevin Hunter Marple
So when word leaked out that Cassel would be the chef at Donald Chick’s new spot on Henderson, the savvy food and wine community whipped itself into a frenzy. Hungry for more than food, their anticipation was fueled by pre-opening press releases outlining Park as a 7,500-square-foot restaurant, bar, garden patio, and lounge with a “funky yet beautiful” decor done by designer Breck Woolsey. The food would be Cassel’s signature “collision cuisine.” There’d be a landscaped patio with twinkle lights and a Bocce Bar with two full-size bocce-ball courts. A colony of honeybees maintained by the Texas Honeybee Guild was readying to live in Cassel’s rooftop herb garden. Who needs health care or a 401(k)? Marc Cassel was coming back, and he was bringing his recipe for mussels with him!

On my first visit, I noticed the cuisine wasn’t the only thing colliding. The crowd surrounding the U-shaped indoor bar stood four deep. The hostess stand struggled to manage the eclectic crowd of high-heeled blondes bumping their D cups against the tattooed women in silk sundresses and Converse low-tops. Men in their late 60s held martinis and chatted with grungy biker dudes sipping Dogfish 90 Min pale ales. The seas parted for a server with dreadlocks piled high on his head. It was the same sort of eclectic clientele I remembered from the Green Room.

The food, however, I didn’t recognize. I was starving after my first meal at Park. Almost everything we ordered was subpar and disappointing. The Live Oak Picnic Basket contained a half piece of Windy Meadows chicken with rubbery brown skin that hung loosely over hard, dry white meat. The batter on the pan-fried chicken-fried flat iron steak dissolved into a floury paste before we took one bite. The pounded beef was tender and richly flavored and robust, but the crust, well-seasoned with fresh herbs, was soggy and lacked cracked pepper. Ditto for the otherwise deliciously thick cream gravy poured over fluffy “buttery mashers.” Cassel doesn’t serve your grandma’s green beans with this Texas classic; the CFS comes with a pile of neon green, crunchy haricots verts. 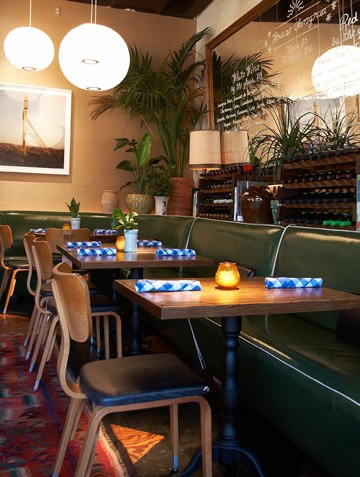 FEELING GROOVY: Park’s funky indoor decor. photography by Kevin Hunter Marple
photography by Kevin Hunter Marple
The taco platter was a messy collaboration of grilled chicken and braised short rib, with refried beans, avocado salad, and tortillas. We could not bring ourselves to order the Aloha State pizza, Cassel’s homage to his homeland of Hawaii. As tongue-in-cheek as the menu may be, I don’t care to spend $14 on a pizza topped with cream cheese, caramelized pineapple, spinach, and Spam. That is a fatal collision waiting to happen.

We steadied ourselves with a bottle of Heredad Candela Monastrell 2006 produced by Senorio de Barahonda, an 85-year-old winery in Spain. The earthy wine with deep notes of black fruit is 100 percent Monastrell grapes and pairs nicely with even a mediocre chicken-fried steak. The “thinking locally and acting globally about wine” list is unique for Dallas. You won’t find the usual Cakebreads or Duckhorns. The team has worked hard to find small, artisanal producers that don’t use herbicides and make smaller carbon footprints. Wine is classified first by red, white, rose, and sparkling and then further categorized as vegan, sustainable, organic, biodynamic, or woman winemaker. Even though the bottle prices vary, all of the wines by the glass are priced the same—$8 for white, $9 for red.

Cassel and crew seem to be trying too hard to be cool and different. Several of the gimmicks—such as itty-bitty baby shrimp, spicy tomato broth, and avocado served as a shooter and a mezze platter with a black bean hummus—didn’t work. However, one did. Grilled whole spring onions are wrapped in newspaper and served with a chunky puree filled with dried chilies, roasted tomatoes, and nuts. On one visit, I cut them up and added them to my cheeseburger.

The menu lives up to its billing. A very nice Vietnamese rice noodle salad collides with an overcooked hanger steak with undercooked fries and a spicy chimichurri sauce. The Niman Ranch BLT sandwich is a waste of calories and not nearly as inspired as the aforementioned cheeseburger, a delicious half pound of grilled meat covered with melted cheddar and served on a house-made sesame seed bun. The thick 12-ounce pork chop is a thing of beauty, but it’s slathered with a cloying ancho honey glaze. 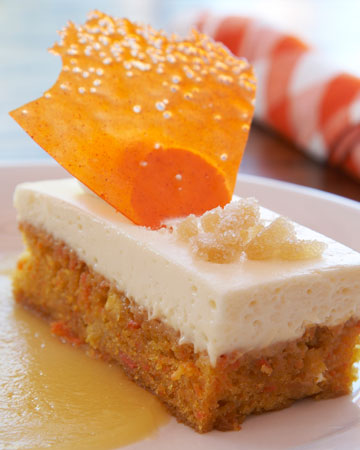 Carrot cake. photography by Kevin Hunter Marple
photography by Kevin Hunter Marple
After that first meal, though, things improved. I staggered my visits to Park over two months, and by my fourth visit, I sensed that Cassel was beginning to settle down. The list of exotic specials had lengthened, and his real talent began to shine. Just when I thought Cassel was going total locavore with Paula’s cheese, Jimmy’s sausage, and Spiceman’s herbs, he threw in a quirky zinger like stingray. “Is it really stingray?” I asked the waiter. “I’m not sure. I grew up in Ecuador, and we used to just throw them away,” he said. A call the next day revealed that the luscious piece of fish served in lemony butter sauce was actually skate, closely related to stingray. Calling it stingray is just another example of Cassel’s sense of humor—a joke he should have at least explained to the waiter.

Park has a heart of green. In-house bottled water is free on request, and they are committed to using local, sustainable, and organic products whenever possible. Kitchen scraps are sent to Tom Spicer’s garden for compost. Cassel checks with his fish purveyor to find where, when, and how the fish was caught.

Marc Cassel is not a pizza-and-hamburger chef. When he gets hold of a fine piece of fish, you can taste his genius. Perhaps he’ll work out the kinks on his chicken-fried steak. Until then, I’ll sit on the patio with a bottle of Viognier made by a woman, put my face above a bowl of his superb PEI black mussels, and let the steam scented with champagne, shiitake mushrooms, and fresh ginger mingle with the voice of Eric Clapton and take me back to the Green Room. At least some of that lost restaurant has sprung to life on Henderson Avenue.