On a stack of unpacked boxes in his sliver of a new office at SMU, professor Jeffrey Talley unfurls the floor plans for the building going up directly outside his window. If he does this with the panache of a two-star general with months logged in military briefing rooms, it’s because he is one.

“If you can imagine an upscale Hilton version of academia, that’s it,” he says, running his hand over the drawings of Caruth Hall, the latest addition to SMU’s resplendent but increasingly gridlocked acreage.

Only six months ago, the 50-year-old Talley was occupied with a strikingly different construction project: the rebuilding of Baghdad. As the chief military engineer charged with restoring of infrastructure—electricity, plumbing, schools, hospitals, roads—to Iraq’s obliterated capital city and the commanding general of the effort to clear Baghdad’s streets of the Shiite militia’s deadly IEDs, Talley and his brigade of 2,000 troops were exposed to relentless danger and stress. Which makes his unflagging affability a surprise, his stockpile of Rambo-ism priceless, and his occasional bluntness understandable. The latter, he acknowledges, is a problem; residue from Iraq, where the “flash to bang time” demands directness.

Still decompressing from his tour there, Talley—the newly seated chair of the environmental and civil engineering department at SMU’s Lyle School of Engineering—recently made quick work of a colleague whose fervor didn’t match Talley’s own ferocious ambitions for SMU: to make it not the fifth- or sixth-ranked engineering school in Texas but a tier-one research university with global impact. If this were the front lines, Talley might say he wire-brushed the guy.

“I was a little direct,” he says. “It was at a private lunch, and this person said to me, ‘Well, if we work really hard, SMU can become a regional Yale.’ And I said, ‘Regional Yale? Get away from me. I didn’t leave the University of Notre Dame to be a regional anything.’”

Talley has landed at SMU with all the subtlety of a bunker-busting bomb. The career Army reservist and, until just a few months ago, prized engineering prof at Notre Dame is the latest and potentially most game-changing star hire by Lyle School dean Geoffrey Orsak. Talley’s mission: to shake up the department and help catalyze Orsak’s lofty agenda to respark the problem-solving imagination of engineers around the globe. Caruth Hall will be the epicenter of Orsak’s vision, home to what he calls “the world’s greatest innovation machine,” a collective of heavily funded institutes that will bring together thinkers and, most important, doers from academia and the private and public sectors to aid ailing and underserved corners of the planet, from West Darfur to East Dallas.

In the late summer of 2008, Orsak had set out only to replace the chair of one of the smallest departments within the Lyle School. But when Talley popped up on his radar, it ignited a recruiting campaign of comical dimensions, one that ultimately would necessitate the Hail Marys of a bishop and a Hall of Fame quarterback, and dig into the deepest pockets of Dallas’ power elite. “There are things we did in this process that I hope will never end up in print,” Orsak says nervously, pulling on a Diet Coke. “But when it’s go time, man, you do everything you’ve got to do. 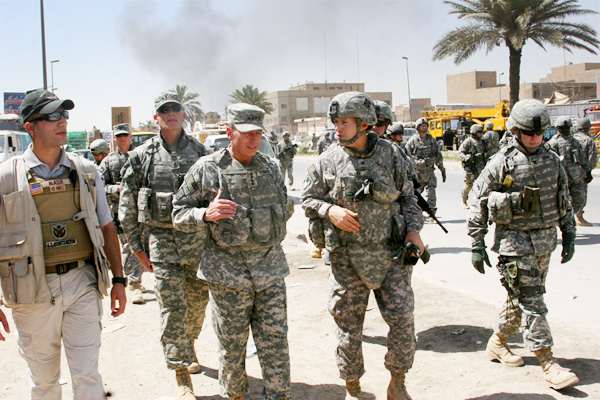 HAZARDOUS DUTY: Talley (second from right) talks with Gen. David Petraeus in Baghdad’s Sadr City in June 2008.
When Jeff Talley was growing up, first in St. Louis, then in the shadow of the Pentagon, in Alexandria, Virginia, he never could have imagined a life in the military. In fact, his impulse was to steal government secrets, not keep them. One of five boys born to a computer-specialist father who worked for the Department of Defense, Talley remembers, as an 11-year-old, messing with the wrong civil servant. “My dad was a country boy from the sticks of Missouri who never finished college, so everything he got, he got the hard way,” Talley says. “He used to carry this briefcase—a beat-up thing that was always locked—and stick it in his bedroom closet at night. So I got in there with a butter knife, and as soon as I popped it open—whomp—Dad was standing right over me. He was a belt guy, and he whupped the livin’ snot outta me. After that, he locked his door.”

Talley’s parents had divorced a few years before, and the financial hardship caused his dad—who had custody of four of his five sons—to juggle multiple jobs. “I guess we were lower middle-class,” Talley says. “I remember a lot of pot pies and that I couldn’t join the Boy Scouts because we couldn’t afford it. Any money I had, I had to earn on my own, and hard work was emphasized. I did every crap job you can think of.”

Talley likes to describe himself as “dumb as dirt.” It’s jest, of course, but there is a Gump-like magic in his extraordinary aptitude for success  and his turnaround from directionless long-hair into one of the most uniquely accomplished academics and military officers in the United States. The thought of going to college hadn’t even occurred to Talley until the spring of his senior year of high school, in 1977, when, he says, “I kinda woke up and went, ‘Uh, oh.’”

Tracking the next 25 years of Talley’s ascent is as futile as trying to eyeball every flaring ember of a fireworks display. He started his undergrad misadventures at Old Dominion, in Norfolk, Virginia, and “did crappy in chemistry” before decamping to LSU, where he met his wife Linda in the library and partied till his money dried up. An ROTC scholarship saved his bacon and, to Talley’s surprise, reversed his antipathy to the military. “I did a total 180,” he says. “I realized I needed the discipline, the structure, and they provided that.”

Enamored of the Army Corp of Engineers, Talley took his middling grasp of science and turned it into a CV now herniated with graduate degrees, each of them earned while ping-ponging Linda and their four kids from one Army reserve deployment to another: a master’s in religious studies from Assumption College, in Worcester, Massachusetts, and another, in history and philosophy, from Washington University, in St. Louis; an engineering M.S. from Johns Hopkins, in Baltimore; a master’s in strategic studies from the U.S. Army War College, in Carlisle, Pennsylvania; and, finally, a Ph.D. from Pittsburgh’s Carnegie Mellon, widely considered to have the most prestigious engineering Ph.D. program in the country.

His first taste of military conflict came in Korea, where, from 1989 to 1991, he served as company commander and lived with his young family in a “hootch, danger-close” to the DMZ. Ever the fiscally cautious kid, Talley laid down cash for a clunker, a used Daewoo Royale, which busted up the Republic of Korea Army soldiers who served under him. “How can No. 1 commander have No. 10 car?!” he remembers them saying.

Although he continued in the reserves, by the late ’90s Talley had settled into civilian life. He wound up in academia, landing at Notre Dame for just three semesters before his phone rang in late 2002. “The president may elect to invade Iraq,” he was told by the 416th Engineer Command, “and we have a critical need for engineers to do infrastructure assessment in Kuwait for a troop build-up there. Be on a plane Thursday.”

A stint in Operation Iraqi Freedom—largely spent in Kuwait, maintaining the forces pipeline into Iraq—was the total of Talley’s Middle East deployment until January 2008, when the Pentagon rang again. This time, Talley pushed back, and in the oddest way. He’d become fully tenured at Notre Dame by that point, an institution and noncombat mission he adored. Talley’s faith and Irish roots run deep. He carries with him a bound copy of the Liturgy of the Hours, prays twice a day, and, if it weren’t for his six-day-a-week workout routine, he would drink beer even more frequently than that. So he was not eager to be airlifted out of his bliss for rear-guard action. If he and his brigade of reservist engineers were to be deployed for a second time in four and a half years, he told them, “I gotta have Baghdad. Don’t take us away from our families and our civilian jobs, from everything we are, if you’re not gonna put us in the fight.”