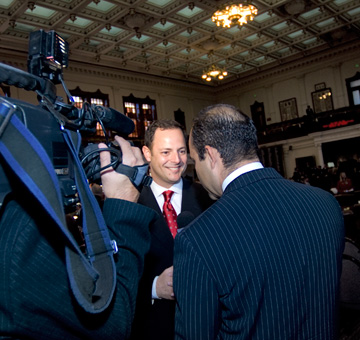 MAN ON A MISSION: Anchia is equally comfortable behind the scenes or in front of a camera. photography by Elizabeth Lavin
photography by Elizabeth Lavin
Let’s assume, for a moment, that history will repeat itself. That Rafael Anchia will answer the siren’s call, at some point in the near future, and run for mayor or U.S. Senate or try out for American Idol. Make a grab at real power, in other words. If that indeed is the case, you need to know who he is now, before he becomes big-time.

The easy answer is that there are two Rafael Anchias. (At least for public consumption. For all we know, there are 12 more skeletal versions of him in various closets throughout Dallas and Austin.) There is Raffy Miami, the vestige of that first-year lawyer who did unspeakably awesome things in our nation’s capital. The one who doesn’t allow a party to start until he arrives. The one who is so charming it seems absurd. The one who likes to talk March Madness. The one who notices that the belt you’re wearing is from Banana Republic. (“Dude, I have the same belt.”) The one who invites the very gringo-ish D Magazine photographer on the floor of the House with his family on the session’s opening day because, as he tells the security guard, “She’s family, too.” The one who loves to dance.

That version was on full display in Denver during the Democratic National Convention. We’d had our first meeting of several in his office a week before. We had a wonderfully professional discussion. We talked about the difference between Barack Obama and Hillary Clinton in person. He is one who believes Obama has less magnetism in the flesh because he’s just such a regular, easygoing guy, unlike Clinton, whom he says has a very commanding presence. (Onstage, flip that.) We chatted about the possibility of Texas U.S. Rep. Chet Edwards getting the vice presidential nod. (Anchia thought he would have been a great choice.) We chatted about Dallas going Democratic, about how even with the urban centers becoming more Democratic, Republicans still control the state. “There are still large parts of the state that haven’t experienced the change in political leaning that the urban centers have.” (He would be proven correct in the general election.)

But once we entered the “Rising Stars” party at 5 Degrees, a hip downtown Denver dance club near the Pepsi Center, we got to see Raffy Miami in full effect. He already had that one-half-drink-too-many gleam in his eye. He was the host with the most, entertaining national and Dallas-area media, politicians, and Sean Penn. He was all smiles and handshakes. He was also a little starstruck. “You see Sean Penn here?” he asked excitedly.
I decided I should try to play a reporter, as I had the week before.

“So, Hillary did what she had to do tonight, I guess,” I began. (The party followed Clinton’s convention speech.) “Make immediate concessions to the Obama camp that the party needed to get behind the candidate and stop the talk of division just because she was snubbed.”

Anchia looked at me with a grimace that said, if it could talk, “Are you kidding me? Are you seriously going to try to talk politics in here? Do you not hear the krush-groove stylings of DJ Diabetic?” He actually said, “Uh, yeah, sure. I really didn’t stay for the speech. I had to get ready for the party.”

And with that, all pretense of political discourse ended. It was time to dance. And, as his chief of staff knows, Rafael Anchia can flat-out move.

Even then, dancing wasn’t enough. Every half hour or so, he would bring another Rising Star to meet and dance with the D Magazine photographer. This included, but was not limited to, Michael J. Sorrell, the president of Paul Quinn College, who is about 6-feet-4 of dancing machine; the aforementioned Eric Garcetti from the LA City Council; and a line of other young up-and-comers.

By night’s end, Anchia had entertained hundreds of well-wishers. He was spent. But he was going to make sure he out-danced every last rock-star pretender in Denver. Ultimately, he was rewarded when a song from his teen years, the Outfield’s “Your Love,” blared. The last song of the night saw Raffy Miami fist-pumping the air, singing in full throat:

===”Dozens of Hispanic families reach out to him as they pass, shaking his hand, talking about change and hope and promise. If he is a rock star to them, he is an accessible one.”!==

Then there’s the other public Anchia. Not a rock star, but a rock-star politician. The one who manages to make unprepared legislators look foolish on YouTube, and do so without breaking a sweat. The one loved by television reporters, English- and Spanish-speaking, because he can talk in perfect sound bites, in either language, and throw in a handsome, made-for-TV smile at the interview’s conclusion. The one who is media-savvy enough to be shot as he’s walking across moving traffic, because it will make the photographer happy.

Not that he’s all talking head. To the contrary, the reason Wolens was so impressed with Anchia was his policy research and nuts-and-bolts preparedness. (You don’t do multimillion-dollar deals with huge corporations, like Anchia does at Haynes and Boone, with a wink and a smile.) Before agreeing to run, for example, Anchia spent hours with Wolens talking process and policy. He hates to be unprepared.

“Everything you work for can come undone in one moment,” Anchia says. “I’m well aware of that. It takes one time for you to be embarrassed on the mike laying out a bill. One time for you to be caught backing out of a promise. And that can forever undermine your credibility. So all I can do is prepare. Like Lincoln said: ‘I shall prepare, and my time will come. I believe that.’ ”

Which is why it appears at times that everything Anchia does is scripted, that he’s a little too “on.” This Anchia was in full effect on election night, at the Bishop Arts District street party.

It was a wonderfully diverse outdoor celebration. In the road, in front of Eno’s, spreading down the street, was a block party filled with people of all ages and races. On the stage were all the important Dallas Democrats—Craig Watkins, Lupe Valdez, Royce West, Domingo Garcia, Terri Hodge, the whole megillah.

Anchia, however, did not join them. He was positioned behind the cheering crowd, standing on a smaller platform, where all the television reporters and cameras were stationed. This allowed him to do three things. One, have enough alone time to constantly check and send e-mails from his BlackBerry to colleagues across the state. Two, shake every hand of every will-wisher who passed by.

Before we get to three, it should be noted there is an undercurrent of disdain among some Hispanic politicos in Dallas when it comes to Anchia. Not on the record, of course. He’s too popular for that. But talk to enough folks, and you witness a few subtle eye-rolls. The problem seems to be that he’s a little too lawyerly, that he is good on big issues like voter ID but spends too much time on things like bills that provide condoms to prisoners or place a tax on plastic grocery bags. That he doesn’t take up enough down-and-dirty issues that matter to his Hispanic constituents. That, like the Dallas he found in 1986, he’s become a little too white-bread.

None of which is on display here. Dozens of Hispanic families reach out to him as they pass, shaking his hand, talking about change and hope and promise. If he is a rock star to them, he is an accessible one.

And, really, the root of that complaint can be found in No. 3: being on the back stage instead of the one in front allows Anchia to be interviewed by local stations during the top of the evening newscast. He’s media-savvy enough to know how to feed the 10 p.m. beast. People see that, and they think, like they did of Clinton, he’s just a little too slick. (Slick Raffy?)

It’s understandable. Watching him put on the perfect political show, not miss a step all night, it’s hard to believe the timing couldn’t be just right for him to take the next step toward the Governor’s mansion, or look for a challenge in the Obama administration. So what if he loses his first time out? So, too, did Ron Kirk when he ran for U.S. Senate. It has not hurt the career of our current U.S. Trade Representative. You see Anchia expertly summarizing the passion and import of the night on Univision, and then Channel 8, and you say to yourself, What are you waiting for? Follow the trail Obama has blazed. It’s your destiny, isn’t it?

“There is a classic prayer,” he says. “Something like, ‘God, if you want me to walk through the door, open it wide, so a fool like me doesn’t miss it. If you don’t, close it really tight.’ ” He laughs. “Right now, I don’t even know where the door is. When I find it, I’ll let you know what I see.”